Some have touted the Royole FlexPai, priced at $1,300, as a potentially revolutionary product akin to early iPhones. (Photo by Yoshiyuki Tamai)
Startups in Asia

At this week's Mobile World Congress in Barcelona, Samsung and Huawei made all the noise with their $2,000 foldable phones. But it was only at Royole's stand that visitors had the chance to touch and play with the industry's most significant innovation in years. Samsung's Galaxy Fold and Huawei's Mate X, sleeker and significantly more costly than Royole's $1,300 FlexPai, were kept securely locked away in glass cases.

Royole is no technology giant. Just seven years old, it has never made a smartphone before. But late last year Royole began commercial production of the FlexPai in Shenzhen.

That achievement, and its expertise in bendable screens and sensors, has caught the attention of big international companies. In December it signed an agreement with Airbus, the European aerospace heavyweight, to codevelop flexible displays and sensors for next-generation aircraft cabins.

On its website, Royole claims a number of firsts: the world's thinnest full-color AMOLED flexible display and flexible sensors (2014); the world's first foldable 3D mobile theater, with collapsing headphones attached to a 3D headset (2015); and the world's first curved car dashboard based on flexible electronics (2016). It holds more than 2,500 patents and has a 102,000-sq.-meter flexible display production campus in Shenzhen, as well as offices in California and Hong Kong. And all of that started when co-founder and CEO Bill Liu was a college student, lounging on the lawn of Stanford University.

Back in 2006, the 23-year-old Jiangxi native went to Stanford to pursue his Ph.D. after receiving a diploma in electrical engineering from China's prestigious Tsinghua University. As soon as he started, Liu began planning what to do for graduation.

The idea of inventing a screen as flexible as a piece of paper suddenly struck him. "I thought that would be really cool and flexible displays could revolutionize the way we interact with the world," he recalled.

For the next three years of his doctoral study, Liu devoted much of his time at the university's laboratory trying to solve the puzzle. "I was so into the idea that I thought about it day and night," Liu said.

When he finally hit on a possible solution in 2012, Liu quit his job as a research scientist at IBM in New York and returned to China with two Stanford schoolmates -- Wei Peng and Yu Xiaojun -- to start Royole.

"Since there were no examples to follow, we had to do everything from scratch," Liu said. "We tried and failed. Tried again and failed again. ... The screen we made contains more than 20 million transistors and has nearly 100 nanomaterials. You have to get every detail right to make it work. Calling the experiment exhausting feels like an understatement."

In the early days Liu had to use his savings to fund the work. But his commitment drew investors. Despite widespread skepticism about the technology -- with some analysts predicting flexible displays would only become commercially available by 2040 -- two Chinese venture capitalists decided to take the risk. "We believed that Liu and his team would make it happen. He has such an impressive background," said Li Wei, founding partner of Shenzhen Green Pine Capital Partners, one of Royole's first investors, in an interview in 2015.

Their faith was rewarded. In 2014, Royole rolled out its first product, a full-color flexible display as thin as onion skin. The display was later used by advertisers to put on clothing, such as flashing T-shirts or top hats, for ad campaigns. Other products include a rollable computer keyboard that can be tucked away like a pen, as well as a smart sofa that has no physical buttons but can be adjusted with one touch on its armrest.

At the Consumer Electronics Show earlier this year in Las Vegas, visitors were enthusiastic about Royole's products. "This is quite easy to use," said Yejong Chang while taking a picture with Royole's flexible sensor-enabled selfie stick. The selfie fan from Seoul said conventional sticks only allowed her to click the shutter button, while Royole's product enabled her to use other functions such as zooming in and out, by simply moving her fingers. "I have never seen anything like that before," she told the Nikkei Asian Review.

Before launching its flexible smartphone in October, Royole was mostly known in the business world. Liu says his startup has supplied customized flexible displays to more than 200 corporate clients, including Hong Kong-listed sporting goods maker Li Ning Company and Chinese smart device producer Toppers. The partnership with Airbus marks a significant coup, even if there is no set timeline for production of the cabin displays.

Royole refuses to disclose its annual revenues but Liu says half the sales come from overseas markets. He ducks the question of whether his company is loss-making.

"Profitability is not our priority" at this moment, Liu said. "As an early-stage startup, if you care too much about profits, you are not doing enough in innovation because innovation requires massive investment," he explained. "We believe once we have cutting-edge products, profits will follow." The Royole booth at the Mobile World Congress in Barcelona was the only place visitors could actually touch a foldable smartphone. (Photo by Cheng Ting-Fang)

To be fair, the company was not able to mass produce its flexible displays until seven months ago, when its factory in Shenzhen went online in June.

Investors do not seem put off. Royole is backed by A-list venture capital firms such as Knight Capital and IDG Capital as well as Chinese financial services tycoon Xie Zhikun. It was valued at $5 billion in its latest E round of funding in August.

Data from information portal Crunchbase shows that Royole has received a total investment of $1.1 billion since its debut. Liu said in Barcelona this week that he was considering another round of fundraising.

Liu owns nearly 41% of the company, while co-founders Wei and Yu hold 5.2% and 4.7%, respectively, according to Chinese company information service Qichacha.

Royole today has come a long way from the tiny office in Shenzhen that lacked even a doorplate. The company now runs a manufacturing hub the size of 56 football fields with more than 2,300 employees. Roughly 70% of the staff are scientists and engineers working at three research and development centers in Shenzhen, Hong Kong, and Silicon Valley, Liu said.

With a production capacity of 50 million units per year, Royole's new factory in Shenzhen now supplies flexible displays for its own bendable smartphones and industrial clients. Although all the products are made in China, Liu said its sales to the U.S. so far have been immune from the ongoing trade war between Beijing and Washington, as the products are not included in the punitive tariff list. Liu declined to disclose how many handsets the company has shipped since the FlexPai hit the market in November, but said the sales "have been going very well."

He is particularly proud that Royole is being compared to Apple. "Some told me that FlexPai reminded them of the very first iPhone or the debut of the Android system," he said. "I was over the moon when they called it 'the reinvented smartphone.'"

But Royole's FlexPai is now up against tough competition after the Samsung and Huawei launches this week. And there are many more in the pipeline. Even Chinese television maker TCL is getting in on the game with plans to launch a smartphone that can be folded into a smartwatch.

Market watchers say the FlexPai will find it difficult to survive against such competition. But they also suggest the company may not intend it to.

Market demand for flexible displays has been growing, as carmakers, smartphone producers and others scramble to produce more efficient and exciting designs. The global flexible display market is expected to double by 2021 from last year's near $14 billion, according to market intelligence firm IHS Markit.

"Royole's best opportunity is not to become a leading smartphone vendor, but to sell its technology and innovations to other brands," said Benjamin Stanton, a senior analyst at global research institute Canalys. "Therefore, the most important conversations will be happening in the meeting rooms behind its booth, rather than at the booth itself."

Royole's display at the MWC attracted executives from Huawei and ZTE, which both have big ambitions for the next generation of mobile technology. Neither produces flexible screens. 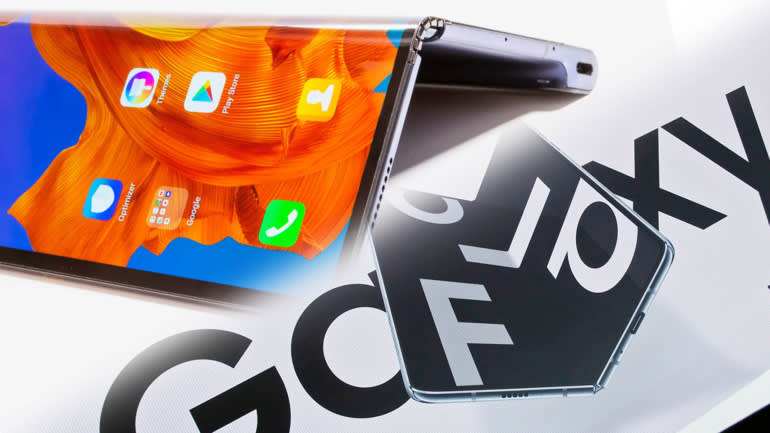 The Huawei Mate X, left, and the Samsung Galaxy Fold both cost around $2,000. (Nikkei montage/AP)

But some analysts are still wary. The company would be battling against the overwhelming dominance of Samsung, which has years of experience in mass producing high quality OLED screens. Royole also faces fierce competition from Beijing-based BOE Technology Group, which supplies flexible screens to Huawei.

"I would not put Royole in the same category as Samsung. I believe the future of flexible display technology is still in the hands of traditional display makers as they really know the industry inside out," said Eric Chiou, an analyst at market research firm WitsView based in Taipei. "There is always concern over how stable its supply would be and at what quality," Chiou said.

Last month, Royole issued a statement defending its technology, saying that the company had received orders worth 4 billion yuan ($590 million) for its flexible displays during the fourth quarter of 2018.

The founder of the Chinese unicorn said he is "not concerned" by incumbent competition or questions over his motives for launching the FlexPai.

"We have been working on flexible displays for years and we are very happy to see many companies recognize this technology as a direction that all of us want to pursue [as] the next generation of innovation," Liu said.

Yet the Royole boss cannot resist a last swipe at his competitors, whose flexible phones remain tantalizingly out of reach for ordinary consumers: "I am proud to say that we are the only company that is shipping products consumers can touch, play and feel."

Nikkei staff writers Kim Jaewon in Seoul and Takashi Kawakami in Guangzhou contributed to this story.