Face recognition trailblazer SenseTime rushes to be next Google

SHANGHAI/TOKYO -- The founder of China's most valuable artificial intelligence startup was only half-joking when he asked an MIT audience last year what company they instantly thought of when he said "AI."

"Yes, it's SenseTime," quipped Tang Xiao'ou, even though the obvious answer was Google. Someday soon, it might not seem like a joke at all.

"Tang told me his dream was to make SenseTime as great as Google," Jeff Shi, president of the company's Asia-Pacific business, told the Nikkei Asian Review.

To achieve that, the startup known for its surveillance technology is expanding beyond China and into burgeoning industries such as autonomous driving. "We want to be an international player, so we have to go international," Shi said.

The global transformation, however, comes as Chinese tech companies like Huawei Technologies and ZTE face scrutiny in the U.S. and elsewhere as alleged espionage threats. SenseTime is unlikely to escape the glare of this spotlight, experts warn, given its reported role in China's vast surveillance state and its status as a member of Beijing's AI "national team" -- elite companies tasked with making the country the world leader in the field by 2030.

The question is whether SenseTime can avoid a Huawei-style backlash to fulfill Tang's ambition. Some investors have big money riding on the answer.

The company's valuation has soared to $4.5 billion since it was hatched in 2014 out of the multimedia lab at the Chinese University of Hong Kong, where Tang remains a star professor. SenseTime's latest confirmed funding round raised $620 million in May 2018, bringing its total intake to $1.6 billion. Its list of backers includes China's Alibaba Group Holding, Singapore's Temasek, U.K.-based Fidelity International and the venture capital arm of U.S. chipmaker Qualcomm.

All of this started when Tang and his students developed an algorithm in 2014 that identified faces with 98.52% accuracy. Not only did this top every other algorithm available, it was the first to exceed the capability of human eyes. "We beat Facebook to the punch," Tang said in his speech at the Massachusetts Institute of Technology, where he earned a doctorate in computer vision in 1996.

The breakthrough prompted U.S. venture fund IDG Capital to supply "tens of millions of dollars" in initial funding in August 2014. One of the earliest customers was state-run wireless carrier China Mobile, which needed to verify hundreds of millions of users against their national identification, as required by China's security law.

Five years on, the competition is intensifying as cash pours into AI. Chinese rival YiTu beat SenseTime's facial recognition algorithms in accuracy tests held late last year by the U.S. National Institute of Standards and Technology. Still, Jeffrey Ding, a researcher at the Center for the Governance of AI at the University of Oxford, stressed that YiTu was the only one that topped SenseTime.

The company is determined to spread that tech. Last month, SenseTime announced plans for an R&D hub in Abu Dhabi. This followed a spate of overseas moves over the past year. The company opened a "smart health" lab in the U.S. to build on research into AI-driven cancer diagnosis. It set up an autonomous driving test center in Japan, where it has a partnership with Honda Motor. And it agreed to help Malaysia create a $1 billion "AI park," developing supercomputing infrastructure as well as human expertise. All told, SenseTime counts more than 700 customers. "While SenseTime's technology is mostly used in Chinese companies, [it] does have clients outside China," Ding said, pointing to Honda.

SenseTime wants to develop self-driving cars with Honda and sell them globally, according to Lao Shihong, CEO of the company's Japan unit. Lao said the vision is different from those of Google or Uber Technologies. Their goal "is to create robot taxis. We want to create something more affordable for ordinary car owners."

Shi said the target is commercialization in five to 10 years. In the meantime, the company is pushing technology to make regular cars safer.

At an auto technology trade show in the Japanese city of Nagoya in mid-July, SenseTime's booth featured a car simulator with a small camera behind the steering wheel. The camera determines the driver's age and gender and monitors his or her face and motions for signs of distraction or fatigue. A display flashes an alert if the driver looks drowsy, is talking on the phone or lights up a cigarette.

Shi said the company is in talks with around 20 global carmakers. "They are big names in Germany, Japan, the U.S. and of course China that together account for 90% of global production," he said. SenseTime demonstrates its driver monitoring technology at a trade show in Nagoya in mid-July. A small camera attached behind the wheel watches the driver's face and movements. (Photo by Mitsuru Obe)

For now, facial recognition remains SenseTime's money spinner. Shi described systems for smartphones as one of the "most profitable product lines."

"We provide deep-learning algorithms to all the major Android smartphone makers globally," he said. The privately held startup does not disclose its earnings, but Shi said it turned profits for 2017 and 2018, with triple-digit compound annual growth over the past three years. The company declined to comment on its ownership structure or plans to go public.

The market is certainly growing: IDC projects AI spending in the Asia-Pacific region alone, excluding Japan, will nearly triple to $15 billion in 2022 from $5.5 billion this year.

SenseTime's technology appeals to Beijing as much as it does to businesses. It offers a suite of powerful "smart city" surveillance tools that can help catch criminals -- and, technically, monitor citizens. Surveillance is "one of the major business lines in China," Shi said, adding that "outside the country we don't do much."

Ding said it was "very hard to say" how much SenseTime relies on state contracts but noted that co-founder and CEO Xu Li, who was a student of Tang's, put the ratio of "government-related" clients at 30% in a report by Quartz last year.

Last September, Beijing picked SenseTime for its AI national team, alongside online giants Baidu, Alibaba and Tencent Holdings, as well as voice recognition specialist iFlytek. Ding said this does not guarantee SenseTime dominance but may give it "a long-term advantage" in terms of setting standards. 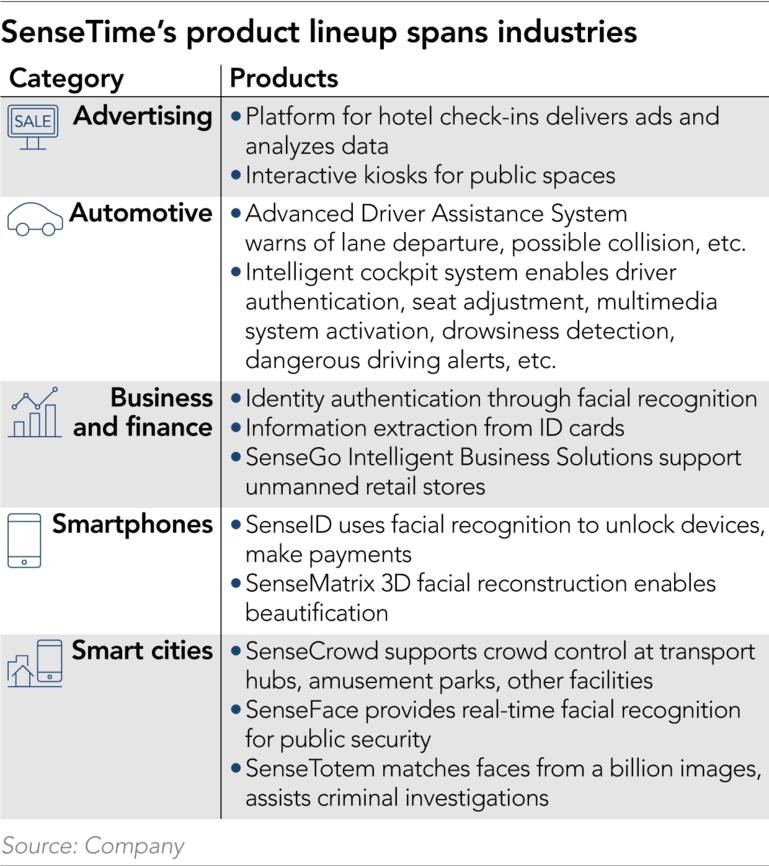 The Beijing connection has been a blessing.

But state ties can also be a curse.

While Shi emphasized that the company draws a "red line" on privacy and security, Heath cautioned that "SenseTime is vulnerable to the same type of charges that the U.S. brought against Huawei." In May, media reports surfaced that President Donald Trump's administration was considering blacklisting five Chinese surveillance-related companies, though SenseTime was not one of them.

"I think there is some risk," said Amy Lehr, of the Center for Strategic and International Studies in Washington. SenseTime's proximity to the government "will raise concerns about national security." She also suggested that revelations of the Chinese government's extensive surveillance of minorities in the Xinjiang region would "have reputational implications for them."

The company seems aware of the image problem. The Financial Times reported in April that SenseTime had sold its 51% stake in a "smart policing" joint venture in Xinjiang, where mass detentions of Uighur Muslims have sparked condemnation. The company was quoted as saying the move was for "SenseTime's own development."

Getting out of Xinjiang was a "step in the right direction," Lehr said. "But they don't have a choice about working closely with the Chinese government." Likewise, Rand's Heath said the withdrawal would not end SenseTime's role in "enabling" the government's practices. Reached for comment on Aug. 8, a SenseTime spokesperson said the company has been "keeping close watch on relevant news and announcements" regarding the U.S.-China tensions and has "always been committed to the responsible usage of AI technology."

"We abide by all relevant laws and regulations of the jurisdictions in which we operate," the representative said.

Others argue government dealings should not devalue SenseTime's achievements.

A source with a U.S. company who is familiar with the startup said: "SenseTime is not secretive or anything. It's a normal AI company, and I'd say it's a team full of really intelligent talents. ... Maybe because I'm Chinese, I'm used to every company having government ties."

SenseTime says it holds more than 1,500 AI patents and employs over 3,000 workers and interns -- including over 150 with doctorates in artificial intelligence. The founder remains a towering figure: Aspiring AI engineers jockey to join Tang's lab at CUHK, according to a student there who described the professor as "nice" but also "strict." Tang is "more like the spiritual leader of SenseTime," said Hua Zhong, senior vice president of engineering at Chinese autonomous driving startup WeRide, which raised $20 million from SenseTime and other investors in January, according to Crunchbase. "Under him are several of his [former] students, who really run the business. We work with them."

While the source at the U.S. company questioned SenseTime's limited experience with autonomous driving, saying they would "prefer [to work with] someone who has better knowledge of the auto industry," WeRide has high hopes for its new partner.

Hua admitted the industry has a "huge technology barrier" but said SenseTime "really understands AI." As for the danger of a Western backlash, he said "a lot of people" ask about it but he hopes that "with time and more communication, these frictions will go away."

"People who work in technology," Hua said, "understand that you need participants from everywhere to bring new ideas."