Thai online fast-fashion retailer Pomelo has immediate plans for 150 pickup points in Bangkok and another 100 in Singapore. (Photo by Akira Kodaka)
Startups in Asia

Online retailer builds real-world presence to become the 'next Zara'

But instead of waiting at home for a package to arrive -- and facing the bother of returning unwanted clothes -- Maneerat arranged a fitting at Printa, a stylish cafe that doubles as a Pomelo pickup point. The upstart retailer has established about 40 such partnerships with yoga studios, boutiques and other cafes across the city.

Maneerat, an office worker in her mid-30s, ended up buying a dark green cotton jumpsuit, leaving the other items behind to be returned to Pomelo. "It fits my body," said Maneerat. "Good texture and good sewing. This service is convenient."

Asia has long been the fashion industry's manufacturing hub. The region contributed 60% of global apparel exports in 2015, with China, Bangladesh and Vietnam ranking as the top three suppliers, according to United Nations trade statistics. But rising incomes have also boosted demand for well-designed clothes in Asian countries.

In Southeast Asia, the combined apparel market of six major economies -- Indonesia, Malaysia, the Philippines, Singapore, Thailand and Vietnam -- increased 30% to $33 billion in 2018, from $25 billion in 2013, according to data from Euromonitor International.

While international chains like Uniqlo, Zara and H&M are leading the way, local fashion houses have multiplied. Brands such as Indonesian Islamic clothing retailer Hijup, Vietnamese shoe brand Juno, and Singapore's Love, Bonito are all competing for a slice of the expanding market. And in some ways, Pomelo is symbolic of the changing nature of Asian fashion retailing in the digital age. Pomelo customer Maneerat Tepravipard is fitted for a cotton jumpsuit at a cafe that doubles as a pickup point in Bangkok. (Photo by Kosaku Mimura)

Founded in 2013, the site has proved a hit with Southeast Asia's smartphone-obsessed middle class, who relish swiping through the hundreds of new items that come online each week. The company has also managed to attract a handful of blue-chip investors including China's JD.com, which led a $19 million investment in Pomelo in 2017, along with Thai retail giant Central Group and Japanese e-commerce site Zozo. So far, the venture has raised a total of $31 million, according to startup database Crunchbase.

Pomelo is said to be aiming for $50 million in another funding round this year, at a valuation of $200 million to $240 million, according to a report by DealStreetAsia. The company says it is profitable in its home market of Thailand, but does not disclose revenues.

With immediate plans for 150 pickup points in Bangkok, and a further 100 in Singapore, Pomelo hopes to challenge global brands with a business model that eliminates expensive last-mile delivery costs to each customer's home.

"We want to build...the next Zara out of Southeast Asia," founder David Jou told the Nikkei Asian Review. "We want to take advantage of the amazing creatives, capital, the big market, the closeness to supply chain and manufacturing, the obsession with social media." David Jou, co-founder and CEO of Pomelo speaks during an interview with Nikkei Asian Review in Bangkok. (Photo by Kosaku Mimura)

But first, Jou said, Pomelo needs to "build density in each city." He explained the company is also looking at pickup points in other cities where it already has online customers, such as Kuala Lumpur, Manila, Jakarta and Hong Kong.

"All of those cities are now live for our e-commerce," he said. "The next step is, once we have enough of that e-commerce user base, we will roll out the pickup network." Internet-connected Southeast Asians tend to be avid mobile shoppers. In Indonesia, 76% of internet users said they had purchased something with a mobile device in the past month, according to the 2019 Global Digital Report by We Are Social and Hootsuite. Thailand was third, at 71%, with China in between them at 74%.

Euromonitor's data shows the value of online apparel and footwear retailing in the six major economies grew more than fourfold over five years to $2.6 billion in 2018.

At the same time, however, online shopping still accounts for less than 10% of overall retail sales in the region. So while most of the buzz generated by Pomelo and other e-commerce startups is focused on their digital marketing, offline strategies are essential.

This helps explain the opening in June of Pomelo's first venture outside Thailand, a 550-sq.-meter flagship store in the heart of Singapore's premier Orchard Road retail strip. Stocked with more than 8,000 items from pants to skirts to accessories, the store will also serve as a pickup point for customers who order online.

Real-world connections may be especially important in fashion, where fit is a key factor in purchase decisions. But Pomelo is also part of a broader trend among Asian e-tailers to explore offline sales avenues. Chinese e-commerce empire Alibaba Group Holding has expanded into supermarkets, department stores and most recently convenience stores. Even with its offline presence, though, Pomelo sees itself as a technology company. It recently developed an in-house supply chain management system that monitors the entire operation in real time. The system provides accurate assessments of profit margins and analyzes customer behavior, helping the design and purchasing teams make decisions.

Jou's background lies not in fashion but in finance, tech and e-commerce. Born in Germany and raised in the U.S., the Korean-American CEO worked at a consultancy and a private equity firm in the U.S. before moving to Bangkok.

He then co-founded the Thai arm of online marketplace Lazada Group. Lazada was later acquired by Alibaba and is now one of the biggest e-commerce platforms in Southeast Asia. Jou drew on his experience at Lazada to set up Pomelo.

One of the reasons he focused on fashion, he said, was that he wanted to capitalize on what he sees as a major Thai asset: design.

"When you go to Bangkok, you will notice well-designed cafes, restaurants, nice interiors and good local products like handicrafts," Jou said. "Design is very developed in Thailand and we really wanted to build a business utilizing that asset, that human capital."

Now the company has about 10 in-house designers among a staff of around 500.

They have their work cut out for them. Mickael Feige, senior partner in Thailand for Asia-focused consultancy YCP Solidiance, said "stronger competition" is one of the challenges for Pomelo. "By playing in the traditional fashion arena, in physical stores, Pomelo is entering a market where competition is fierce with giants like Zara or H&M."

Feige stressed these multibillion dollar companies "are much larger machines with much bigger budgets, product variety and marketing power."

Somehow, Feige suggested, Pomelo will have to find ways to "keep customers interested in its products" despite fast-changing fads. With limited resources, this could be difficult, "if the stylists are not able to react quickly with new tailoring and new designs, and launch the products into the market promptly," he said.

Pomelo is taking steps to broaden its customer base. Although it started out focusing exclusively on women's fashion, it launched a menswear brand in Thailand in December, and plans to bring it to Singapore and other markets in the future.

But Pomelo, which says it is "happy" to remain private for the time being and has no immediate plans for an initial public offering, also faces a fight for investment with other Southeast Asian fashion startups.

Singapore's Zilingo, an online platform for apparel brands and merchants, this year raised a total of $226 million. Zilingo CEO Ankiti Bose told the Nikkei Asian Review earlier this year that the company planned to invest in technology products, such as an inventory management system, that would spur the growth of textile factories and wholesalers in the supply chain. Zilingo also intends to launch its own brands. Pomelo's competitiveness may hinge on product quality as well. Not everyone is as impressed with the sewing as Maneerat, who picked up the dark green jumpsuit at the Printa cafe.

A 27-year-old tax consultant in Bangkok who shops on Pomelo said that while she likes the designs, she feels the quality is not as good as she expected and the stitching of a dress she purchased was poor.

Still, analysts say Southeast Asia has all the right ingredients for companies like Pomelo to grow.

"Growth in demand for fashion spearheaded by a rising middle-class segment, increasing internet connectivity in Southeast Asia, the low entry cost for online businesses to cater to such demand, and increasing availability of growth capital -- these all led to the recent growth of the local fashion startup scene," said Omar Aziz, a Singapore partner at YCP Solidiance.

Aziz thinks demand for fashion will "naturally rise" since it is one of the main ways people express themselves. And Jou is positioning Pomelo to be at the center of what he envisions as "a new hub" for fast fashion in Southeast Asia. 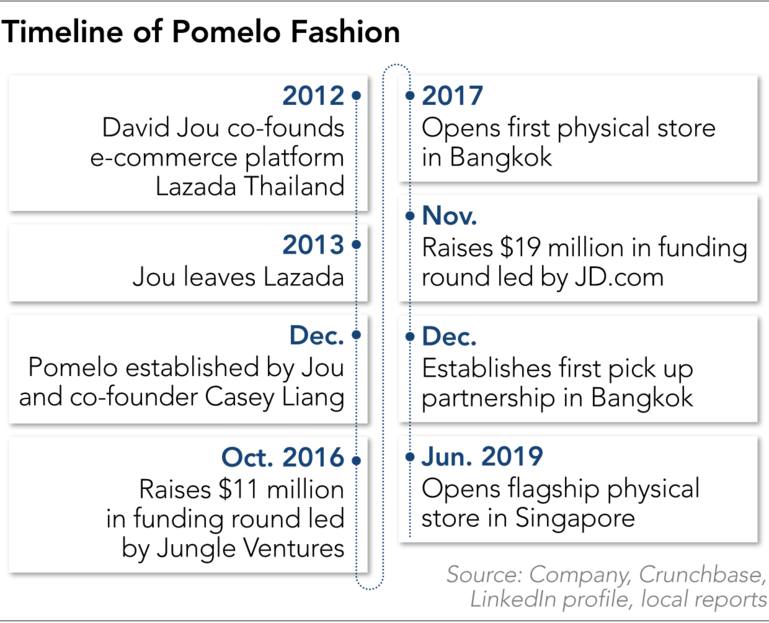