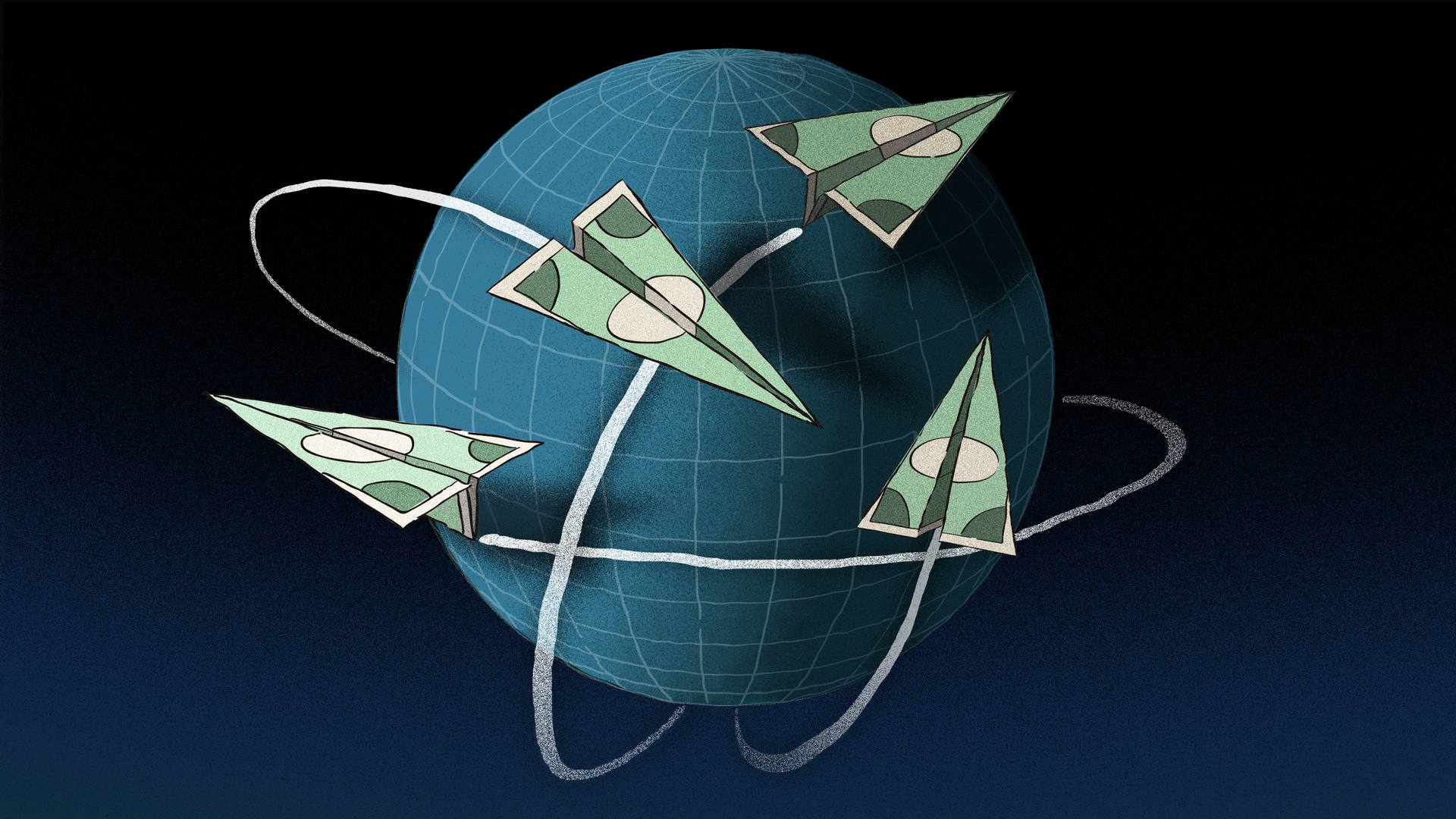 HONG KONG -- The struggles of a specialty coffee shop run by two budding entrepreneurs in Melbourne lie behind the success of Airwallex, Australia's newest unicorn, which provides easy foreign exchange transactions for startups and other small companies.

While Western Union and other financial service companies slapped 5% fees on each transaction, the numerous intermediaries along the way sapped time and energy.

At the time, Zhang was also working full-time as a developer of foreign exchange software at ANZ Bank. He saw how corporate clients paid less -- and did less -- than smaller companies in cross-border, business-to-business transactions. 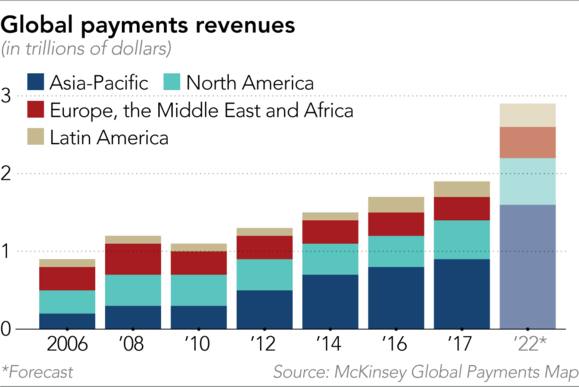 This inspired Zhang and Li to launch another business that focused on providing simple, less-costly foreign exchange and international payment services to internet companies as well as small and midsize enterprises.

Partnering with three alumni friends from the University of Melbourne, Airwallex was born. "We make foreign exchange much easier by innovating upon the underlying financial infrastructure," said Zhang.

Three and a half years later, Airwallex has grown from a five-member team to a thriving company with over 260 staffers in eight offices spanning Australia, China, Hong Kong, Singapore, the U.K. and the U.S. The company's client list includes nascent startups as well as giants like Tencent, JD.com, Ctrip and MasterCard.

In an interview with the Nikkei Asian Review, Airwallex co-founder and president Lucy Liu summed up the company's advantage: "We offer very transparent interbank exchange rates and one-stop solutions to our clients."

To slash transaction costs and times, Airwallex ditched the SWIFT global payment network that has been around since the 1970s and is now used by more than 11,000 financial institutions.

Instead, Airwallex built a proprietary network with more than 50 global banking partners, including Standard Chartered, DBS Bank and the Industrial and Commercial Bank of China, to handle local clearing and payouts.

Airwallex uses machine learning technology to enable low-cost, high-speed and transparent international payments, from global collection to foreign exchange and international payments. Customers can instantly create accounts and use a suite of applications that integrate into their existing finance or resource planning systems to make streamlined international transactions.

"We reduced a lot of manual processes by integrating with our clients' systems instead of having them integrate with different banks around the world," said Liu. "The end-to-end user experience is our biggest competitive edge."

Airwallex currently enables transactions to more than 130 countries in 50 currencies, sometimes at fees of less than 0.5% and in only one or two days. This is "half or a quarter of the time major banks need," said Liu, citing the benefits to small companies.

"Most of our clients are tech companies that are growing very fast. They chose us because traditional banks don't respond quickly enough to their needs," explained 28-year-old Liu, who in 2017 was named as one of Forbes' 30 under 30 young entrepreneurs to watch. According to Forbes, Liu set up the Shanghai office and built the Chinese arm of the business. 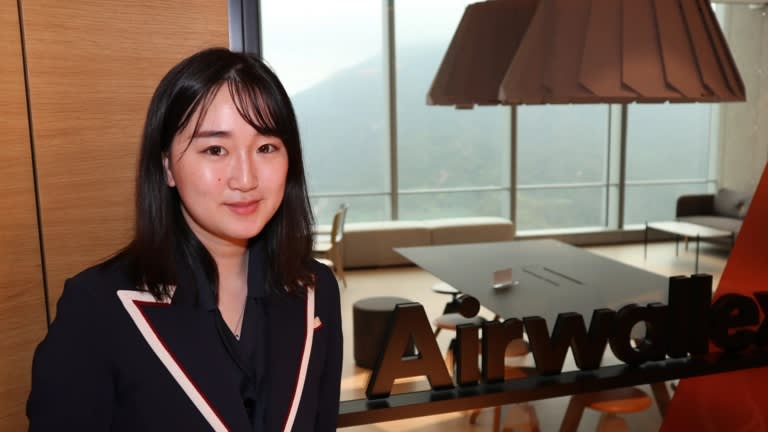 Now headquartered in Hong Kong, Airwallex joined the ranks of unicorns -- tech startups valued at over $1 billion -- in March after a series C fundraising round that brought in $100 million from DST Global, Sequoia Capital China, Hillhouse Capital, Gobi Partners, Tencent and billionaire Li Ka-shing's Horizons Ventures, among others.

"This company makes a lot of sense," said Thomas G. Tsao, co-founder of Gobi Partners, an Asian venture capital company and early investor in Airwallex. Gobi’s broad coverage enabled it to identify Airwallex at an early stage. "It makes it easier to purchase from sellers anywhere in the world, and minimizes transaction costs."

But Tsao refused to go further. "Let your imagination be the ceiling," he said. "This could be a very, very big company.''

With capital worries out of the way for now -- Airwallex raised $200 million in its first three funding rounds -- the company wants to expand its services and global presence to stay competitive in the cutthroat remittance industry.

"More and more businesses are moving online and increasingly selling their products worldwide," said Liu. "Our vision is to become the fundamental infrastructure for online businesses and SMEs to scale."

According to a 2018 report by management consultancy McKinsey & Company about global payments, although SMEs account for nearly 30% of global imports and regularly execute international payments, their needs are frequently ignored.

"Currently treated as either simple corporates or complex consumers, SMEs are often lost between correspondent banking and the premium affluent cross-border market," the report said. "With the right payments experience, SMEs will represent a growing share of cross-border trade, and therefore revenues."

As fintechs move into niche areas of credit lending and retail banking, further pressure is being added to the "already competitive operating environment" of traditional banks, said Daniel Yu, a senior analyst at Moody's Investors Service.

According to Yu, Australia's largest banks have taken notice and are trying to defend their positions by investing in digital technologies. But smaller banks are more vulnerable, as they cannot afford to make similar investments, he said. 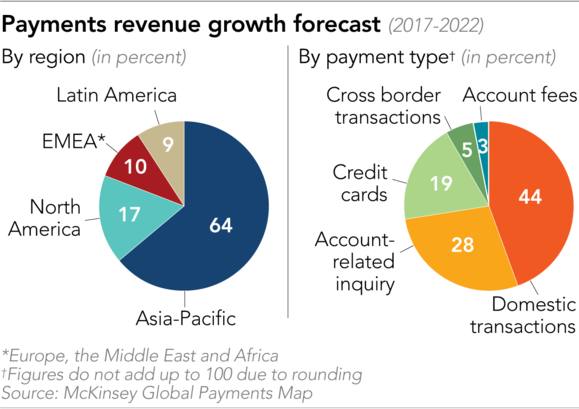 "New players in cross-border payment services provide attractive value propositions to users in terms of efficiency, convenience, and cost advantage," said Fern Wang, a director at S&P Global Ratings. "They also tend to be better positioned to serve the customer base that is currently underserved by more established players."

Still, compliance and regulation could become a major obstacle to the newly minted unicorn.

One of the main reasons Airwallex moved headquarters to Hong Kong last year was to improve its chances of snagging one of the city's first virtual banking licenses. It has added over a dozen new hires to fill a renovated office in a grade-A commercial building located on the eastern side of Hong Kong island.

The company fared better in the U.K., with its British unit receiving Authorised Electronic Money Institution licensing last November from the local regulator. However, a no-deal Brexit could sink Airwallex in Europe.

"Regulations surrounding these cross-border transactions and fintechs in general are still evolving, which could prove to be challenging to these newer business models," said Wang from S&P Global Ratings.

But Liu says she is "not too worried," adding that the company is expecting the approval of a remittance license in Japan before the end of June, and is already in discussion with a number of Japanese clients.

In China, Liu said Airwallex is stepping up sales efforts in its Shenzhen office and is "seeing a lot of growth" in the region's Greater Bay Area.

Without disclosing specifics, the company said that although transaction amounts are growing at about 30% month on month for the last 12 months, it has yet to turn a profit.

"It is a balance between profitability and how fast we grow," said Liu. "We will raise new capital when we need it to fuel our growth, but we are not thinking about going public right now." 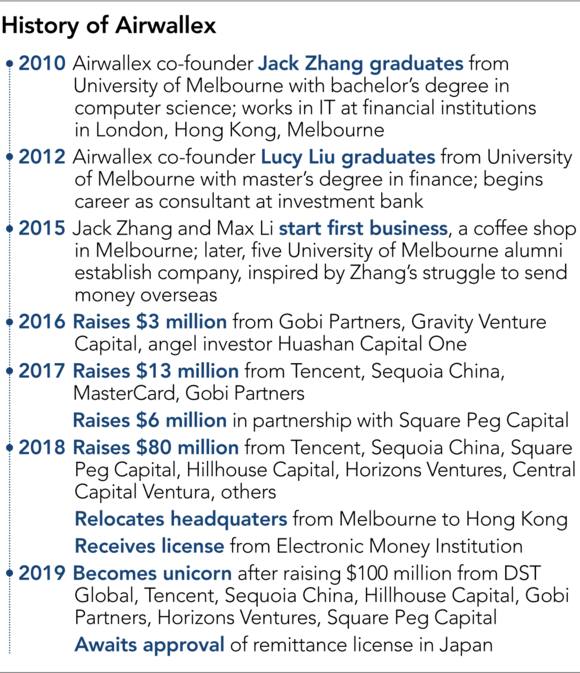