India is the world's top milk consumer, but its fragmented and low-tech dairy industry has a productivity problem.   © Reuters
Startups in Asia

Stellapps deploys thousands of sensors in world's No. 1 milk market

NEW DELHI -- Prahlad Kumawat is all too familiar with the bitter irony of Indian dairy farming. In a country that considers cows sacred and where people consume far more milk than anywhere else on earth, production is painfully inefficient.

Kumawat keeps eight animals in the dusty northwestern village of Daulatpura. When they are lactating, he sells 20 to 30 liters of milk a day, earning around 20,000 rupees ($280) per month. But he struggles to survive long stretches when his cows are not producing at all. "It's not easy to run a household by only selling milk," Kumawat said.

Technology might now make his life -- and the lives of roughly half a billion Indians who work in farming -- easier.

Hundreds of startups are shaking up Indian agriculture, proposing solutions to chronically low output. The number of agritech ventures has risen 25% to 450 this year, with funding up 300% to $248 million, according to the National Association of Software and Service Companies. This wave of innovation and investment promises to support Prime Minister Narendra Modi's pledge to double farmer incomes by 2022.

In dairy farming, one of the brightest prospects is Stellapps Technologies. The Bangalore-based company was founded in 2011 by five telecom experts from Wipro, a leader in India's information technology sector. Their idea of using sensors and data to increase efficiency across the entire milk supply chain -- production, procurement and chilled logistics -- has attracted $18 million from investors including the Bill and Melinda Gates Foundation. More money is on the horizon. It all starts with the mooOn, a device Stellapps co-founder and chief executive Ranjith Mukundan describes as a sort of "Fitbit for cows."

The hardships of farmers like Kumawat have nothing to do with insufficient demand. This year, India is projected to consume 69.8 million tons of liquid milk, 3.2 times more than the U.S. and over twice as much as the European Union, according to a U.S. Department of Agriculture report.

The trouble is that the average Indian cow produces only 1,200 liters annually, versus about 12,000 liters in the U.S. or Europe. The difference, Mukundan explained, is that while U.S. cows usually go no more than a month or two without lactating, the dry spells in India can last as long as six to seven months because of ill-timed breeding. That leaves farmers like Kumawat struggling to eke out a precarious living.

To pay the bills, Kumawat also grows pulses on a modest patch of land in his remote town -- a roughly seven-hour drive from New Delhi, through heavy city traffic and over treacherous rural roads. "It is difficult for a small farmer like me to keep feeding cattle during the dry spell," said the father of three.

One reason Indian cows underproduce is that farmers often miss ovulation cycles. The farmers rely on visual signs and, if the animals ovulate during the night, they might not notice at all. "When ovulation happens," Mukundan said, "you need to artificially inseminate [quickly] because peak ovulation lasts only about four to six hours."

The mooOn "captures that," he said. Stellapps sends alerts to local vets registered with the company, so the cattle can be inseminated in time. "[Our] software is always detecting it ... as the cost of not noticing can be very high -- a long dry spell."

Mukundan performed some quick calculations to show just how expensive that can be. 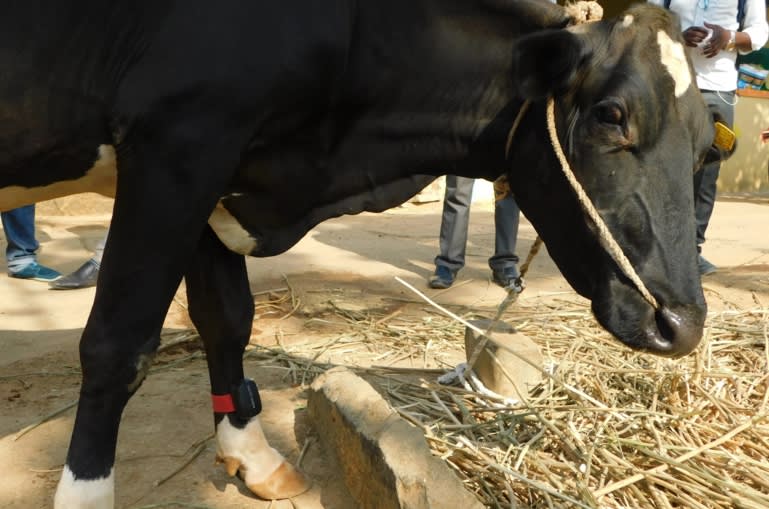 He explained that the animals ovulate every 21 days. If a lactating cow yields, say, 10 liters a day, missing a single cycle would mean losing 210 liters.

"Then you are missing one cycle after the other, so you may lose six cycles," he continued. Considering the average Indian farmer sells milk for 25 rupees a liter, six missed cycles works out to 31,500 rupees or nearly $450 in lost annual income from just one cow.

Stellapps says around 50,000 mooOn devices are in use, leading to a 38% rise in productivity and a fivefold increase in profitabilityfor farmers. The startup charges $1 per cow every month for the device and support services.

Inefficiencies in Indian farming are not confined to the dairy business. Even a cursory tour of the countryside reveals a heavy reliance on backbreaking manual labor. Many farmers plow their fields with ox carts, unable to afford tractors. Monsoon rains play an outsize role in determining harvest success or failure.

Indeed, agricultural productivity growth as a whole lags "far behind that of other Asian economies such as China, Vietnam, Indonesia and Thailand," according to an Organization for Economic Cooperation and Development report published in July 2018. "Average yields of most key crops in India are still low compared to other major producers and, in some cases, even world averages."

Indian farm incomes, the OECD notes, are around one-third those of nonagricultural households. This poses a challenge for Modi. Agriculture accounts for 43% of employment in the country of 1.3 billion, according to the latest International Labor Organization figures -- a huge voting bloc.

Howls of protest from farmers are one reason India on Nov. 4 opted out of the Regional Comprehensive Economic Partnership, or RCEP, missing a chance to join a free trade area spanning the Association of Southeast Asian Nations plus Australia, New Zealand, Japan, South Korea and China. If Stellapps and other agritech startups solve the productivity problem, however, it might give Modi more flexibility. While smarter milk production begins in the barn, it does not end there. Stellapps has developed a suite of automated "internet of things" tools for corporate clients as well, designed to strengthen key links in the milk supply chain.

"When we looked at the entire [dairy] supply chain, we noticed there were a lot of inefficiencies and the only way to get rid of them was to deploy sensors across the chain," Mukundan said.

Dairy farmers bring their milk to a village collection point, where a Stellapps device grades its quality. An ultrasonic sensor measures the fat and protein content and can detect whether water has been added.

In cold storage, meanwhile, Stellapps sensors monitor the temperature. An anomalous reading will trigger an alert, warning that someone might have switched off the cooling system.

Stellapps has deployed its IoT devices at about 20,000 locations across India, with the network monitoring around 6 million liters of milk daily. The company aims to reach 150,000 locations, including farms, collection centers and chilling facilities, in the next three years. At that point, one way or another, the startup will be handling roughly 30 million liters of milk daily.

"Stellapps has come up with a fairly creative idea around procurement in the dairy sector which others are not doing," said Abhinav Shah, CEO and co-founder of Osam Dairy, another client that collects milk from 3,000 farmers in the eastern state of Jharkhand and neighboring Bihar. "Their solutions are fairly innovative, fairly unique in the market and they help you solve problems." Dairy farmers bring milk to a local collection center in the Bangalore suburb of Anekal. (Photo courtesy of Stellapps)

"We have not broken even. We are spending more than we are earning because there is a huge amount of R&D expense that we are incurring even today."

One initiative is to make a smaller mooOn. The challenge is to pack enough battery power into a slimmer device, since it is not rechargeable and needs to last five to seven years.

"We are cracking those problems," Mukundan said.

Another round of fundraising could help. The first $18 million came from investors such as Omnivore, an agritech fund tied to the multibillion-dollar Godrej Group conglomerate, Binny Bansal, co-founder of e-commerce group Flipkart, Blume Ventures and the Gates Foundation. Stellapps is looking to drum up an additional $30 million in the coming weeks.

"We are trying to raise [the funds] just before or after Christmas," Mukundan said, adding that most of the prospective investors are in the U.S. and Europe.

The company is eager to expand its agritech network all the way from South Asia to the West, too.

In Sri Lanka, Stellapps is poised to close a deal worth more than $5 million with state-run dairy company Milco. The startup is looking at Bangladesh as well.

"We are also keen on tapping Africa, as it is very similar to India," said Ravishankar Shiroor, one of Mukundan's fellow founders. "We are looking for opportunities where our solutions will almost directly fit. ... If there is an opportunity worth $2 million to $3 million in the first 12 months to 18 months, we would like to get in there and expand."

In Europe, Stellapps has opened a small office in northern France's Normandy region, backed by a French government program. Mukundan noted that European corporate clients are willing to pay around $35 a month for cloud services, text alerts and other services that fetch only around $4 in India.

Nevertheless, Stellapps wants to unlock the untapped potential of its home market.

The company plans to use some of the money it raises to launch financial and insurance services for India's small-scale farmers. Shiroor is leading a "transformation and consulting team whose mandate is to handhold our customers through the digitization journey," according to Mukundan.

"We sort of want to become a McKinsey for dairies," he said, telling customers, "Look guys, this is how digitization can help you, this is how it can improve your balance sheet."

That includes ensuring steadier flows of milk and money for farmers like Kumawat.