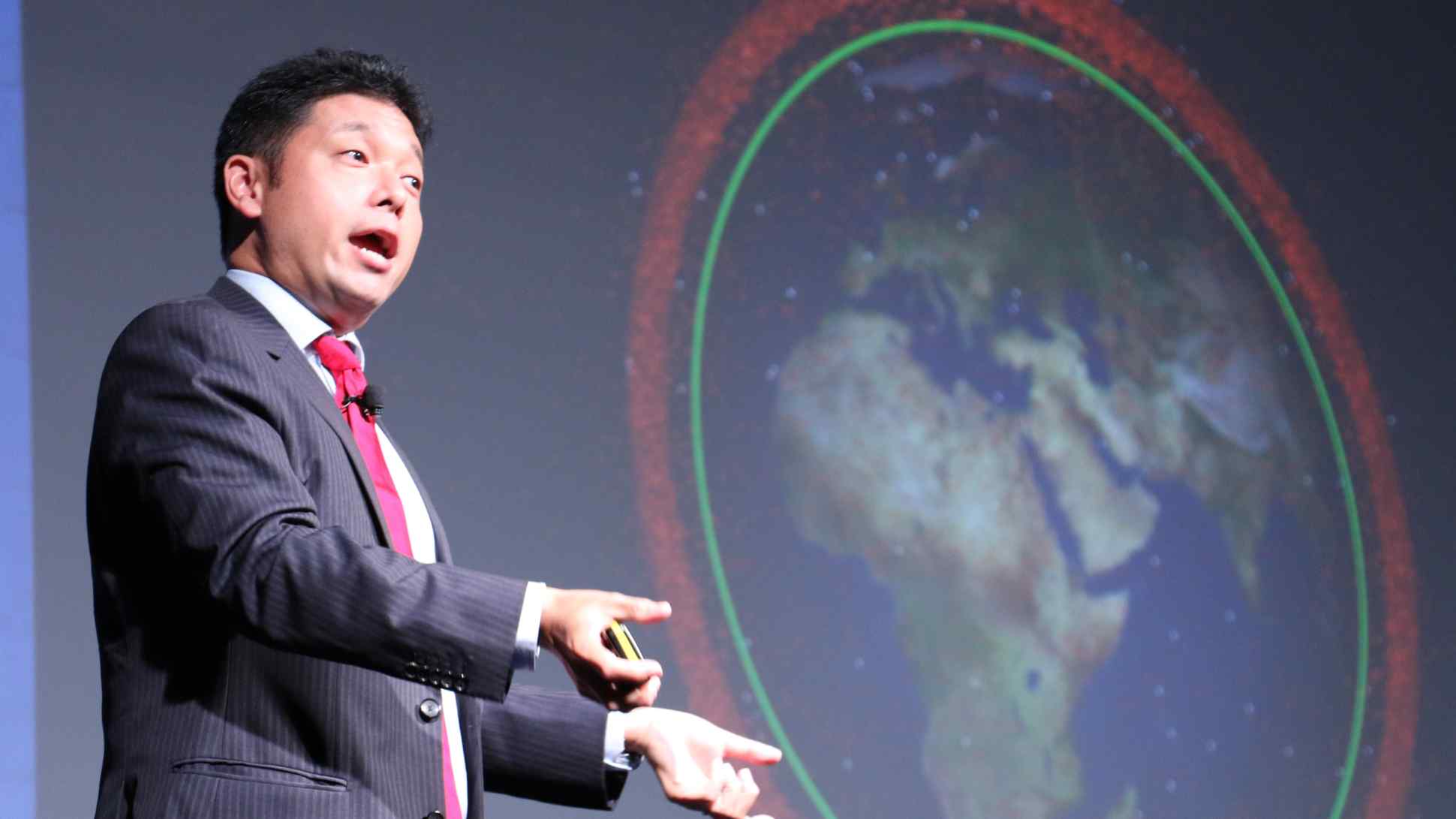 Astroscale CEO Nobu Okada launched his company after a midlife crisis made him question what he wanted to do. (Photo by Ken Kobayashi)
Startups in Asia

Galactic garbage collector aims to clean up in space

SINGAPORE -- Nobu Okada openly admits that Astroscale, the Singapore-based space debris removal company he founded in 2013, was born out of a mid-life crisis.

"I was 39 years-old, I was wondering, what's life going to be when I'm 40?" the Japanese entrepreneur says. After 15 years in IT, and ready to move on from the software business he had founded in 2009, Okada decided to rekindle his teenage passion for space. But while he imagined a life filled with scientists talking about rocket systems or micro satellites, today he finds himself preoccupied with galactic garbage.

Astroscale is one of a small group of international businesses vying to be the first to develop a commercially viable way to bring down defunct satellites and capture a piece of an unusual, but potentially lucrative future market.

Over the next 10 years an estimated 6,200 small satellites will be launched into orbit, according to space consultancy Euroconsult. They will be used for everything from providing internet access in the remotest regions of the world, to helping humans to navigate their cities, seas and airspace, as well as observing changes to the planet on which they live. More than 5,250 launches in over 50 years of space exploration and exploitation have put roughly 42,000 tracked objects into orbit. (Courtesy of Astroscale)

But those satellites have a limited life span and cannot be left to orbit the Earth forever. Already more than 5,250 launches in over 50 years of space exploration and exploitation have put roughly 42,000 tracked objects into orbit, according to the European Space Agency. About 23,000 remain in space, of which just 1200 are intact, operational satellites.

The redundant spacecraft now pose a growing risk to other satellites and space craft. In 2016 British Astronaut Tim Peake tweeted a picture of a crack in the window of the International Space Station, caused by a tiny piece of debris, perhaps as small as a fleck of paint. Larger pieces could disable or even shatter a satellite or spacecraft, according to ESA.

Momentum is now growing for satellite operators to provide the means to bring down their dead or defective craft, before they can launch another into space.

That is where Astroscale intends to play. Okada believes that satellite operators will be forced by regulatory requirements -- which, admittedly, so far have been slow to take hold -- technical necessity or a sense of responsibility to want to pay for Astroscale's services. Left: This 7 mm-diameter chip in a window of the International Space Station, pictured in 2016, was gouged by debris no bigger than a few thousandths of a millimeter across. (Photo courtesy of ESA/NASA) Right: Airbus developed this space junk harpoon that, coupled with a chaser craft, will drag debris into the atmosphere where it will burn up. (Photo courtesy of Airbus)

"In the end, what we want is a one up, one down policy," Okada said. "I really hope this will be a legally binding across the world. But the world is not perfect."

The next year will be critical for Astroscale. The company's Elsa-D spacecraft is scheduled for trial launch in early 2020. The company's solution is to attach a specially designed docking plate onto satellites which can be targeted and captured by a chaser vehicle equipped with a powerful array of electromagnets. These will pull the defunct satellite down toward the earth's atmosphere where both chaser and satellite burn up. Should the satellite spin away out of sensor range, ground crews will help to redirect the chaser to intercept it.

A lot is riding on the test. It will prove whether Astroscale's technology is viable -- or simply another space dream. The company's last mission to place a small debris-tracking satellite in orbit was lost when the launch vehicle failed.

Moreover, even if the test does prove that the technology works, the market for it does not yet exist. It is obviously too late to attach docking plates to satellites already in space.

So Okada is counting on a proliferation of satellite constellations as more private companies move to exploit the commercial opportunities in space.

U.S. investment bank Morgan Stanley estimates that the global space industry will grow from $350 billion revenues today to more than $1.1 trillion in 2040. That growth will be driven mostly by an exponential increase in demand for data, which will require a similar increase in satellite capacity. 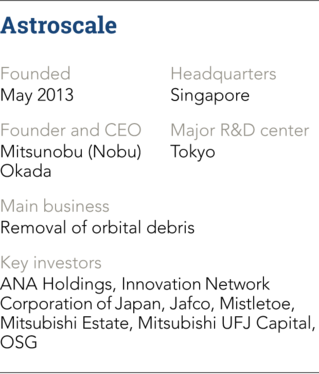 The advent of these constellations will increase the value of orbital real estate. Okada hopes that companies operating these networks will need his services, either to make their orbits safe or to remove faulty or defunct satellites from the constellation.

Okada admits there is still much to do before he can say with confidence that there is a viable commercial market for space debris removal. "We have to solve the business model, the technology and regulation concurrently," Okada said.

But experts are already quantifying the opportunity. Technavio, the aerospace and technology consultants, estimate that the market for debris removal and monitoring could reach $2.9 billion by 2022. Debris removal technology is forecast to account for more than half of that value. Okada shows off the company's satellite antenna in Yokohama, southwest of Tokyo, on July 4. (Photo by Shoji Yano)

The fact that Astroscale is no longer an outlier suggests that others too have spotted an opportunity.

In September, a European consortium including Airbus staged a successful test of a project called RemoveDebris, which used a net to capture a small satellite. Airbus has tested other potential solutions on the ground, including a spacecraft with a harpoon.

These, and other technologies, are being developed under the auspices of a European Space Agency mission, e.deorbit, which will attempt to remove a derelict eight-tonne satellite from orbit in 2023.

Last year an attempt by the Japanese space agency JAXA to use a disposable spacecraft fitted with a 700 million electromagnetic tether to grab debris and drag it into the Earth's atmosphere ended in failure.

Competing with these large players is likely to come down to simple economics. The ESA's e.deorbit mission will cost an estimated $400 million. Astroscale is aiming to bring the cost of removing one piece of debris down to between $10-50 million.

"If we can lower down the price point and clarify the value proposition for the customers, [then] there's a kind of sweet spot," Okada said. "It will not happen tomorrow, but it will happen soon."

The presence of competition has, according to Okada, reassured Astroscale's backers. "Until last year, investors were asking me: 'why don't you have any competitors? Are you doing something quite impractical?'" he said. "But now there are competitors they believe in the mission."

One of Astroscale's early investors was Taizo Son, younger brother of SoftBank chief Masayoshi Son and head of the technology venture capital company, Mistletoe. Son's company joined Astroscale's Series A fundraising round in 2015. Mistletoe's chief growth officer, Atsushi Taira, admitted that backing Okada required a leap of faith, as well as a long-term view on the industry.

"We love a crazy idea. Especially Taizo likes a crazy idea," Taira said. "It's a long shot, but I think people understand, somebody needs to clean up space. It's quite straightforward in that sense... The direction's right. We don't know about the timing, but we should be supporting it."

Astroscale has now raised more than $100m in venture capital funding, most recently in a $50m Series D round in October that was led by INCJ, the Japanese public-private investment fund. The money has gone into developing Elsa-D and expanding internationally. As well as a headquarters in Singapore, Astroscale has a manufacturing and R&D hub in Japan and an operations center in the U.K. It will open a Washington office in 2019, to improve links with the U.S. aerospace establishment. Having a presence in these centers is important to be able to access regional markets and expertise, Okada said. "Space is global, but still regional. Europe is open, Japan is open. America is more...America-oriented... Let's see how it goes after we open our office in Washington."

Space is also expensive, and Astroscale does not have the luxury of a billionaire founder like others in the sector. Nor can Okada yet reward those who have backed him from the start. The business is still entirely engaged in research and development, and does not make any revenues.

Astroscale will need more capital before it can come to market - perhaps in 2020. Okada says his current plan has been to raise money every 15 months, progressively proving the technical and commercial concepts.

Yet he is confident that, despite the obstacles, he will get there in the end. And that the rewards will eventually be great. "There's a way for billionaires. But there's a way for average guys to inch their way," he said. "There's a proverb: to become a millionaire in the space industry you have to start as a billionaire. But if there is ever [going to be] a trillionaire, he or she will be in the space industry."