A kiosk in Jakarta serving as a Bukalapak "agent." Its owner buys his daily supply of goods through the company's smartphone app. (Photo by Erwida Maulia)
Startups in Asia

TOKYO / JAKARTA -- On a narrow street behind towering office buildings in central Jakarta, Mulyono has been running a small kiosk for the past four years. Until recently, the 31-year-old small-business owner had been procuring his daily supply of goods -- grocery items like instant noodles, coffee sachets, shampoo and soap -- from local distributors. That started to change in June, when a salesman from Indonesian e-commerce startup Bukalapak showed him how to purchase his supplies on its smartphone app.

"Now I buy everything via Bukalapak ... cellphone credits, cigarettes, instant noodles, even sandals," said Mulyono, sitting under a sign at his store that reads "Bukalapak agent." Like many Indonesians, Mulyono goes by one name. "Everything is cheaper, and the delivery is free." He even receives cash back for buying the goods through the app's electronic payment service and penalty payments if the morning order does not arrive by the end of the day.

Bukalapak has grown by building an online marketplace connecting buyers and sellers, jostling for market share with Tokopedia of Indonesia, China's JD.com and others for a slice of Southeast Asia's largest consumer market. But since last year, it has also started to go beyond individual shoppers and target small kiosk owners like Mulyono, by buying products directly from consumer goods companies such as Unilever and distributing them.

By doing so, it hopes to cut out the various layers of middlemen that have kept prices of goods high and incomes for merchants suppressed. That will enable Bukalapak to indirectly reach the tens of millions of consumers that still shop at their neighborhood kiosks for basic goods.

The initiative presents a potential opportunity for navigating Indonesia's challenging e-commerce sector, where a lack of infrastructure, internet connection and banking services have posed major obstacles for startups trying to bring shoppers and merchants online. It is also a sign of how massive investment into the industry is pushing startups to explore unconventional ways of growing. 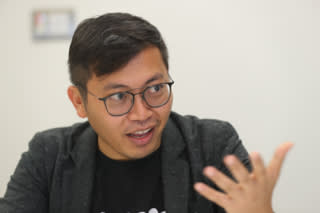 Zaky faced a backlash after he criticized the government's low R&D spending. (Photo by Ken Kobayashi)

"We are building a network of mom-and-pop stores because they are focusing on the bottom of the pyramid," said Achmad Zaky, Bukalapak's founder and chief executive. He said the company has signed up 300,000 kiosk owners across the country and accounts for a "big" portion of its annual gross merchandise value, or the value of merchandise sold on the platform.

Overall, Bukalapak says it has four million merchants, over 50 million users, and a gross merchandise value of nearly $4 billion -- larger than Mercari, Japan's leading marketplace app. Bukalapak does not disclose revenue or profit figures, but it is widely considered among industry observers to be loss-making. 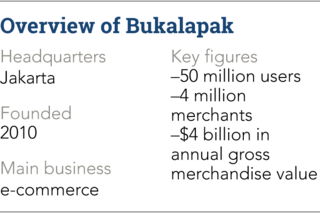 Bukalapak has a long way to go: Indonesia is estimated to have millions of kiosks across the archipelago. But investors are already excited.

Zaky said investors poured some $400 million into the company last year in exchange for minority stakes. These investors included Jack Ma's Ant Financial Services Group, the privately held affiliate of Alibaba Group Holding; Singapore's sovereign wealth fund, GIC; Indonesian media conglomerate Elang Mahkota Teknologi, or Emtek Group; and China's New Hope among others. According to Crunchbase, Bukalapak has since become Indonesia's newest unicorn, a private startup valued at $1 billion or more. Zaky said the company is in discussions with more investors for further funding, although he declined to name them.

Joining the big leagues marks an unlikely success for Zaky, 32, who was raised in a small city near Indonesian President Joko Widodo's hometown of Surakarta in Central Java. After studying engineering from Indonesia's elite Bandung Institute of Technology, he and two of his classmates founded Bukalapak, which means "open stall" in Bahasa Indonesia, the local language, in 2010 with the aim to empower the country's millions of small businesses through technology.

It was still early days of e-commerce, and Zaky had difficulty convincing merchants about the benefits of selling goods online. Only about one in 20 signed up to join his site, and for the ones who did, he occasionally had to create email addresses and passwords for them. But the efforts soon paid off: Bukalapak received seed funding from a Japanese-Indonesian venture capital fund. That enabled Zaky to hire new talent and scale the business.

The company was ill-equipped, however, to face a flood of competitors flush with cash. Its deep-pocketed rivals included Lazada, the Rocket Internet-backed venture that was bought by Alibaba in 2016.

"Our rival had $1 billion, and we had $1 million," Zaky said, recalling how he frequently woke up in the middle of the night, terrified that his startup would shut down the next day. Bukalapak's app serves people in the lower rungs of the income ladder, Widodo's core support base. (Photo by Ken Kobayashi)

Bukalapak dealt with the challenge by employing what Zaky calls a "cockroach" mentality: Instead of taking the competition head on, it looked for ways to survive even on a small budget.

That led to some outside-the-box ideas. After discovering a strong following among collectors of bicycles and cameras, the company expanded the number of offerings in those hobby-related categories as well as its geographical footprint, working with third party distributors to deliver goods to remote areas like the easternmost province of Papua. It also monetized male shoppers by recommending clothing items for their wives. Zaky's wife is Diajeng Lestari, CEO of Muslim fashion site Hijup.

The push into offline retail represents the company's latest tactic to differentiate itself from competitors.

Indonesia boasts the world's fourth largest population, at 260 million, with a rising middle class and tech-savvy millennials. Google and Temasek Holdings, the Singapore state investment fund, estimate that Indonesia will account for about half of Southeast Asia's $88 billion e-commerce market by 2025. In the conventional online shopping business, Bukalapak jostles for market share with Lazada, JD.com, Tokopedia -- another homegrown unicorn backed by Alibaba -- and scores of players backed by local conglomerates.

Growth is strained, however, by the fact that large numbers of online shoppers are still limited to big cities. Various obstacles still prevent consumers in remote regions from shopping online: There is a chronic shortage of physical and digital infrastructure, and many people do not have the bank accounts necessary to pay for items.

While half of Indonesians are now connected to the Internet, according to London-based marketing company We Are Social, Zaky says only one in 10 actually shop online.

Analysts see the so-called online-to-offline business, or O2O, as a new frontier. "The perception that the warung will be replaced by modern convenience stores is wrong," said Elisa Suteja, a Jakarta-based analyst at venture capital company East Ventures. "Indonesians are very social and build personal connections with warung owners. That is why some companies are putting technology in more traditional markets, instead of trying to move transactions online," she said.

Zaky said Bukalapak is the first major player to create a network of kiosks. He also has greater ambitions: By amassing data on the transactions of small business owners, Bukalapak aims to create a scoring system and give them small loans.

Bukalapak itself does not have a banking license. After its electronic payment service BukaDompet was suspended in October 2017 pending review by the central bank, it has integrated Dana, which was developed by Ant Financial and Emtek, as a payment channel since August.

Zaky said he is considering expanding its financial-services business further by acquiring such companies that already operate under a license. "Payment and finance is a very interesting space."

But questions linger over whether Bukalapak can maintain its edge in an environment where growth is prioritized over profitability. Bukalapak's rivals are similarly looking for new areas to expand into because "e-commerce is one of the more mature industries," Suteja said. Kiosk businesses, which are run under partnerships with third-party logistic providers, are vulnerable to copycats.

Suteja adds that investors are closely watching a new generation of "vertical" startups that run leaner, niche e-commerce businesses like coffee or cosmetics. These may eventually take a bite out of "horizontal" marketplaces like Bukalapak, which offer a wide range of goods and services.

But Zaky is used to the pressure. "It's a matter of how strong you are," he said. "Only time will tell."