Tokopedia founder and CEO William Tanuwijaya, who grew up in a rural community, wants to bring e-commerce to Indonesia's far-flung corners. (Photo by Kosaku Mimura)
Startups in Asia

JAKARTA -- Love, they say, conquers all. At least, it gave William Tanuwijaya a second chance to conquer Indonesian e-commerce.

The startup he co-founded, online mall Tokopedia, was starved for capital in 2014 when he was invited to an urgent meeting in Tokyo with SoftBank Group CEO Masayoshi Son. Normally, it would have taken too long to obtain a Japanese visa. But since Tanuwijaya had been planning a surprise marriage proposal to his girlfriend, who was vacationing in Japan, he already had one.

"I really believe in the word 'serendipity,'" said Tanuwijaya, 37. "Sometimes, you need luck."

Soon after the meeting, a SoftBank-led $100 million financing round pulled Tokopedia back from the brink of bankruptcy. Yet, it will take more than love and luck to overcome the next challenge, which is the daunting geography of Indonesia itself. This, Tanuwijaya believes, will require warehouses.

A lot of warehouses.

Tokopedia, which lets individuals and small businesses set up online storefronts, is already Indonesia's biggest internet marketplace and one of the country's four unicorns -- private startups valued at $1 billion or more. The SoftBank Vision Fund and China's Alibaba Group Holding came in for another $1.1 billion funding round in December 2018, pushing Tokopedia's valuation to an estimated $7 billion. Now, Tanuwijaya wants to diversify and create what he calls an "infrastructure as a service" company. The idea, put simply, is to ensure products are in the right place at the right time, even if that place is a far-flung community. In practice, there's nothing simple about it.

Indonesia is a logistical nightmare, with its chain of 17,000 islands spanning 5,000 km from east to west. Estimates vary but around 6,000 of the islands are said to be inhabited, and many lack the modern infrastructure e-commerce companies depend on. So sorting, storing and moving goods around is expensive: Logistics costs amount to as much as 25% of the country's gross domestic product, the highest ratio in Southeast Asia as of 2016, according to an Asian Development Bank report.

Tokopedia, armed with transaction data accumulated since its founding in 2009, has noticed that some merchants are missing out on potential demand due to those costs.

"There is this lady that sells banana chips in Aceh. When we look at her sales data ... people from Jakarta sometimes don't want to buy," Tanuwijaya said, noting that high shipping costs put customers off even highly rated products.

One customer, 30-something Jakarta resident Alpha Parahita, was shocked to find that ordering fish cakes from Palembang -- a one-hour flight away -- would set her back 200,000 rupiah ($14.10), a quarter of which was the shipping fee. "Paying such a high fee just to get fish cakes delivered made me think twice," she said.

Tanuwijaya is convinced he and his staff of 3,200 can change this.

"We started thinking, what if we can have every business that joins us somehow have a warehouse everywhere in Indonesia," the founder said. Not only would this bring down shipping costs, but "every product they buy on Tokopedia [could] be delivered on the same day."

This may sound ambitious for a company that, Tanuwijaya admitted, is still in the red. But he plans to forge more partnerships with local logistics companies -- so far it has tie-ups with 13 -- as well as warehouse operators nationwide. Tokopedia will combine this network with artificial intelligence, feeding the system its decade worth of data in order to predict demand.

The predictions, in Tanuwijaya's vision, will help merchants strategically place inventory in warehouses close to their prospective customers. This will mean cheaper shipping and more same-day deliveries.

Tokopedia is developing AI on its own, while also keeping an eye out for opportunities to acquire AI companies. Tokopedia has 5 million registered merchants, 70% of whom are first-time entrepreneurs. (Photo by Kosaku Mimura)

Tanuwijaya said the predictions will be provided for free. Even now, in most cases, the company does not charge its 5 million registered merchants for listing on the site, and nor does it take commissions on their sales. Tokopedia keeps its earnings under wraps but makes the bulk of its revenue from advertising, including fees merchants pay to have their shops placed higher in search results.

When it comes to the infrastructure strategy, Tokopedia will be looking to charge clients for other related services. If the banana chip seller in Aceh decides, based on the demand predictions, that she should have inventory stored near Jakarta, Tokopedia will charge a fee for securing the space.

The company has no plans to start building warehouses on its own.

"Different types of services will have different types of pricing," Tanuwijaya said. "We will bring the efficiency. We will make sure that the product will not sit idly in the warehouse. If your business is growing bigger, you will only pay as you need. This is how we will monetize."

Ali Fancy, principal at Singapore-based Cento Ventures and former CEO of fashion e-commerce site Zalora Thailand, said a pay-as-you-go system "will result in significantly reduced supply chain costs and increased efficiency, as the bulk of the operations cost and responsibility for correct stocking are pushed down to the individual merchant level."

However, Fancy said such a strategy required "extensive and regular merchant training, to ensure the demand prediction tools are used correctly to avoid excess or shortages of items."

"With the capability of merchants varying widely, Tokopedia's merchandising team will need to constantly monitor and advise merchants on correct stock levels," he stressed.

Tokopedia is not just looking at physical logistics but also infrastructure of the financial kind. For e-payments, it has tied up with Ovo, a major platform backed by the Indonesian conglomerate Lippo Group. And it plans to use AI for customer care services and to run credit checks on merchants seeking loans to expand their businesses.

As more and more startups look to be all things for all people -- "super apps," some call themselves -- Tokopedia already offers other conveniences, like allowing users to pay their utility and phone bills through its website.

Branching out with new services and expanding geographically are the best bets for fending off competitors, industry watchers say.

The Indonesian e-commerce market is estimated to be worth $53 billion in 2025, according to a recent report by Google and Temasek, making it the largest in Southeast Asia by some distance. But that big number has attracted numerous rivals. While Tokopedia leads the way with 153 million monthly visits, according to iPrice Group, fellow Indonesian unicorn Bukalapak logs 95 million.

Shopee, the e-commerce arm of Singapore's Sea Group, draws 38 million. Lazada, another Singaporean company backed by Alibaba, is close behind at 36 million.

Tanuwijaya is looking for new ways to separate his company from the rest of the pack. 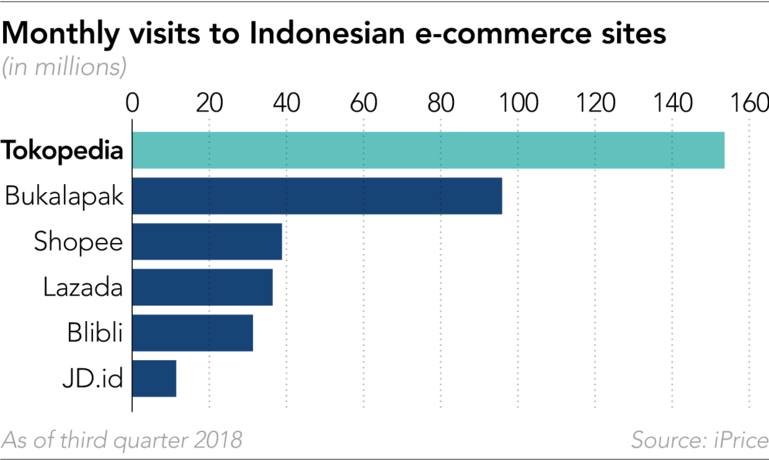 "If you just stay in B2C or C2C, the margins are very thin," said Patrick Yip, founding partner at Intudo Ventures, a venture capital firm focused on Indonesian startups. "Diversifying is to survive too. If you don't diversify ... I think it will be very difficult to last."

Tokopedia is also diversifying by increasing its connections with offline mom-and-pop stores. Tanuwijaya sees mutual benefits in helping them to survive in the shadow of large retailers and online stores.

"I started to realize [that local retailers] have something unique, which is trust from their neighbors, the neighborhood community they serve," Tanuwijaya said. This trust, he said, is "strong" and should be "empowered using technology."

The idea of working with small local shops is not unique to Tokopedia. Bukalapak is doing it, too, as are startups in other countries with vast informal economies, like India. But Tokopedia aims to gain an edge by using its AI and the envisioned logistics network to help shopkeepers restock based on demand or offer certain products without actually keeping inventories of them.

Thanks to his own humble upbringing, Tanuwijaya seems well-positioned to understand the needs of Indonesians in the country's remote corners. He was born in a rural community in northern Sumatra, and only realized what his hometown was missing after he moved to Jakarta to attend Bina Nusantara University.

"In my hometown [at the time], there was no Gramedia," he recalled, referring to an Indonesian bookstore chain. If he wanted to buy books, he had to visit bigger cities three hours away by car. But once in Jakarta, "I was very happy...[because] every week I could go to Gramedia."

It dawned on him that rural consumers faced "inequality of opportunity." Tokopedia, he suggested, was born out of the desire he and his co-founder, Leontinus Alpha Edison, had to level the playing field for consumers, local shopkeepers and anyone aspiring to set up a business. Of the company's registered merchants, 70% are first-time entrepreneurs. 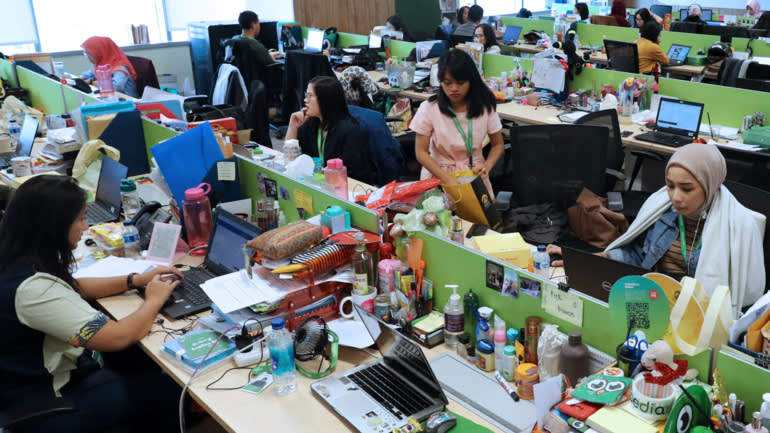 Tokopedia, which operates out of this headquarters in Jakarta, is looking to increase its connections with offline mom-and-pop stores. (Photo by Kosaku Mimura)

Still, while Tokopedia may be a labor of love, all companies need to turn a profit sooner or later. Tanuwijaya insisted the business would be profitable "if we stop evolving." He's just not willing to do that.

"We always invest our profit back into growth," he said.

Tanuwijaya is motivated not by his current competitors but by threats he cannot foresee. "If you see all the big tech companies ... usually what kills them is the unknown. It does not come from their big rival ... it comes from a new era of technology or a new way of serving a customer."

This danger, he said, is the reason Tokopedia keeps an "underdog mentality" despite its market lead and strives to "continuously evolve."

While Tanuwijaya expressed interest in an initial public offering, he said there is no hurry, since the company has enough funding to pursue its goals. For the time being, he is focused on ensuring the business is built for the long haul.

Few executives think as far ahead as the one who once saved Tokopedia, Masayoshi Son. The SoftBank chief, after all, has famously spoken of his 300-year plan. Tanuwijaya has similar ambitions: "I really want to build a company that long outlasts me."