Diajeng Lestari, center, in white, with employees of her startup Hijup at its headquarters in Jakarta. The CEO says her company is now aiming to be more than just an e-commerce operator. (Photo by Akiyoshi Inoue)
Startups in Asia

JAKARTA -- It was during her time as an executive at a marketing research company that Diajeng Lestari encountered a very Islamic, and a very feminine, problem.

"There was no hijab for working women," Lestari recalled. "There was less option for hijab fashion or Muslim fashion, and it was very hard to find fashion for active working women."

Her difficulty in finding fashionable, work-suitable hijabs and other items -- modest clothing worn by Muslim women covering most parts of their bodies except the face and hands -- eventually led her to starting Hijup, an operator of an Islamic fashion e-commerce site with the same name. Jakarta-based Hijup offers modest yet fashionable items, including headscarves, blouses, dresses, accessories and more for Muslim women, by both established and up-and-coming designers. Lestari claims that the company was the first of its kind when it was founded in 2011.

Seven years later, the company is now aiming to be more than just an e-commerce operator. "We want to influence [women] to express their real identity -- Muslim identity -- but still fit the society," said Lestari, the company's CEO.

As a company operating in the world's largest Muslim-majority country, with more than 80% of the country's 260 million citizens following the religion, such a mission statement may seem unusual. But donning the head scarf is a relatively new trend in Indonesia, one that Lestari said only recently caught on. Hijup CEO Diajeng Lestari says entering the European market is an opportunity for her company to bring “positive things of Muslim value” to Western countries through Muslim fashion. (Photo by Akiyoshi Inoue)

For the majority of the 31-year rule of President Suharto, which ended in 1998, ethnicity and religiosity were suppressed in favor of promoting a single secular "Indonesian" identity for the sake of social stability. Only Muslim women in limited communities, such as students and teachers at Islamic boarding schools, wore hijabs then as they were banned in public places like schools and offices. It was only around the time of Suharto's fall, which led to the democratization of the country, that devout Muslim women were able to express themselves more freely by donning hijabs.

Twenty years later, the situation in the archipelago nation is much changed. Indonesia now has the fifth-largest modest Muslim clothing market, estimated to be worth $13.5 billion, just behind Saudi Arabia, according to a report by Thomson Reuters. Turkey is the top market, valued at $27.4 billion, followed by the United Arab Emirates and Nigeria. Hijabs and other forms of covering, which in some Western countries are seen as a symbol of oppression, have come to fulfill a dual function as a sign of connection to Islam as well as a fashion item, with the emphasis in recent years on the latter.

Hijup is part of the driving force in the rising popularity of hijabs as fashion attire, especially in large cities, through its promotion of Islamic fashion on Instagram and YouTube. Its YouTube channel has more than 275,000 subscribers, while its Instagram account has about 790,000 followers. Hijup has had 1.6 million unique visitors to its website since 2011, and it ships products by prominent Muslim designers to more than 50 countries and handles 200 brands.

The company ranked 20th in the number of visitors to e-commerce websites in Indonesia for the second quarter of this year, with a monthly average of 930,000 visits, with such popular items as tunics, dresses and headscarves by prominent Indonesian Muslim fashion designers, including Dian Pelangi and Ria Miranda.

For contemporary Indonesian Muslim women, wearing a hijab used to mean abandoning being fashionable because there were not many options for modest outfits in the early years of the growing popularity of hijabs.

Previously, the only options were items such as oversized shirts and skirts, or loose over-garments called abaya, combined with plain headscarves. But Hijup broke away from that tradition, offering a wider range of items that are fancier and more elegant in design. Working Muslim women now have an option to appear both fashionable and professional, while at the same time not deviating from the Islamic teaching of being modest. After opening 21 brick-and-mortar stores in Indonesia -- Lestari said that despite the rapid growth of e-commerce, Indonesians still favor the face-to-face shopping experience -- Hijup is aiming to stretch its goal by offering modern designs to Muslim women in international markets.

The company already has a store in Kuala Lumpur and it will open a shop in London later this year. "The population growth of Muslims in the U.K. is quite rapid compared to the availability of fashion needs for Muslim women there," Lestari said.

A Pew Research Center report last year said that under a "medium migration scenario," Muslim residents in the U.K. could rise to 13 million in 2050 from 4.1 million in 2016.

The company's expansion means that Lestari is busier than ever, especially with two small children to look after, the youngest of whom she gave birth to last year. She lives near her office in south Jakarta in order to make it easier to balance the demands of her work with motherhood. Her husband Achmad Zaky's company Bukalapak -- one of four Indonesian startup unicorns, with a valuation of more than $1 billion -- is located near their home, too.

Balancing parenthood and life as a CEO "is challenging," Lestari admitted. "Our strategy as a parent is to choose the school that is close to the home and choose the home that is close to the office, so we can manage our time to family and work life," she said. "For us, fathering is as important as mothering. So, as a father, Zaky should have enough 'budget' for quality time to bonding with the girls, too."

The Bukalapak founder was also instrumental in Lestari's decision to start her own company, helping her realize that being a mere employee at a company limits her ability to create an impact on society.

But even with Lestari's determination, the European market will be difficult to crack. She said that European society imposes the same barriers to wearing hijabs as she felt herself when working at the research company. "Maybe in Paris, young Muslim women are afraid of wearing hijab because there is a potential to be harassed by someone on the street because of Islamophobia," she said.

There have been numerous reports in recent years of Muslim women -- by wearing headscarves and other clothing that suggest their religion -- facing abuse in public, and some European countries have introduced bans on headscarves.

In France, headscarves are banned in state schools, while in Germany, half of the country's 16 states impose a headscarf ban on teachers. Austria and Belgium have banned niqab, or burqa, the face-covering veils.

But Lestari remains unfazed. She sees this as an opportunity to bring "positive things of Muslim value" to those countries through Muslim fashion. "Fashion [can become] a way to represent a good image of Islam." 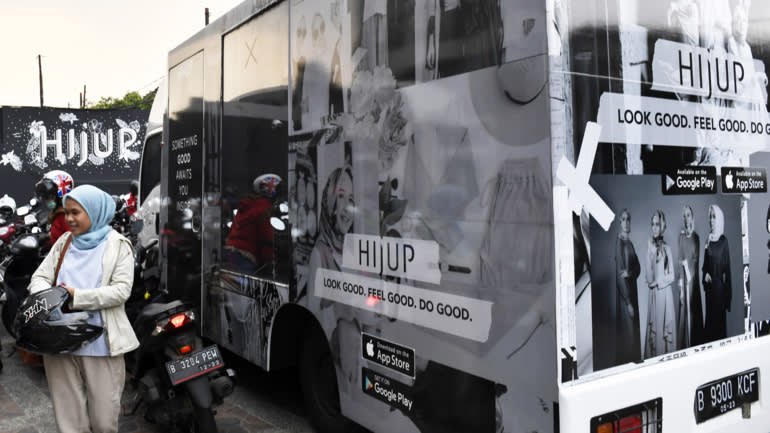 A Hijup truck in Jakarta. After opening 21 brick-and-mortar stores in Indonesia, the company is aiming to stretch its goal of allowing Muslim women to express themselves to international markets. (Photo by Akiyoshi Inoue)

One U.S.-based investor in the company agreed, saying that people in some countries sometimes have a negative impression of Muslims. "But by being fashionable ... they look modern and they are more likable -- more acceptable in society -- and at the same time they are still following their religious rules and regulations."

As a company that tries to shine a positive light on Islam, Hijup is keen to ingrain Islamic values in its day to day operations. Its core philosophy is "Lillah, Billah, Fillah," which translates as "to Allah, with Allah, in Allah," and is considered the path to perfect faith.

"For example, in monthly employers' meetings, we share about what are the Islamic values that relate to the work ethic," Lestari said. "The values internalized by the employees [are] also in line with Islamic values ... being interested, empowering people, helping people, being lean, being open, being result oriented."

Such adherence to Islamic values also led Lestari to seek out funding that was Sharia-compliant. That is, the funding must not bear any interest, which is prohibited in Islam; that the investment has no ethical concerns; and that the contract is transparent.

The company has so far received two rounds of undisclosed funding from California-based 500 Startups, Skystar Capital of Indonesia, as well as from Elang Mahkota Teknologi, a Jakarta-based media conglomerate. The company was also chosen as one of the startups to participate in Google's Launchpad Accelerator Program, a three-month program to help promising startups.

Lestari said that her company is "very selective" on funding. "We reviewed the agreement, whether it is Sharia-compliant or not," she said, adding that when comparing potential venture capital funding and bank loans, venture capital firms were more compliant with Islamic teachings. "If we get some risk, the investor also gets some risk. But in a bank loan, if we got some risk and we don't succeed, then the bank does not want to know."

While there are no Islamic regulations on whether venture capital is Sharia-compliant, equity-based financing generally is considered compliant.

The company does not disclose information on its ownership structure.

With the company planning expansion both within and outside Indonesia, being selective about the source of funding could cost it valuable time, not least when it is starting to face competition from companies with similar business.

Hijabenka, another Indonesia-based e-commerce website for Muslim fashion -- but with more affordable offerings and a mass-market focus compared with Hijup -- is seen as the closest competitor in the country. Muslimarket, another competitor, last year raised funding from 500 Startups and some individual investors.

Hijup is also facing intense competition from larger e-commerce sites, like Lazada and Tokopedia, which sell a broad range of general items but have their own Muslim fashion sections. Also, there are numerous small online shops marketing their products through Instagram or Facebook. 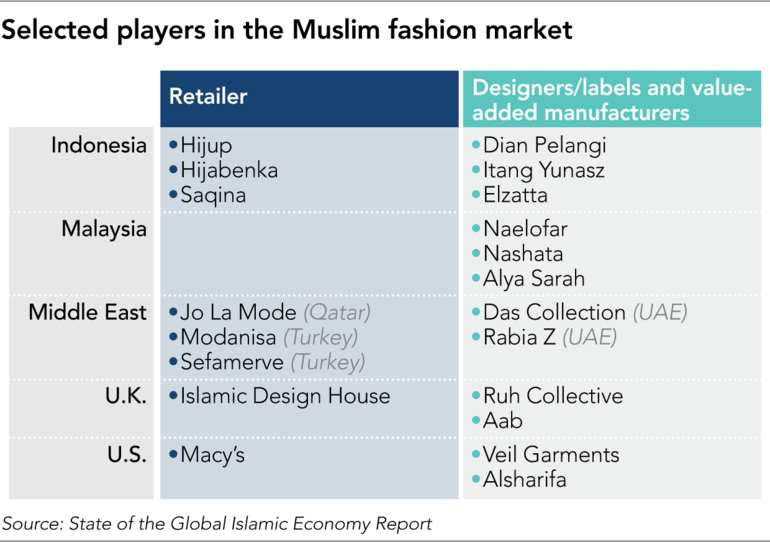 But Hijup takes pride in being a pioneer. Other online retailers and brick-and-mortar stores in Indonesia often follow new Muslim fashion trends that appear on Hijup and introduce their own less-expensive versions.

"Hijup is the pioneer, we select the designers, and it is exclusive for Hijup, and selection is more up to date and we emphasize on the newest of the fashion, but in Hijabenka they are more price sensitive," Lestari said of the competition.