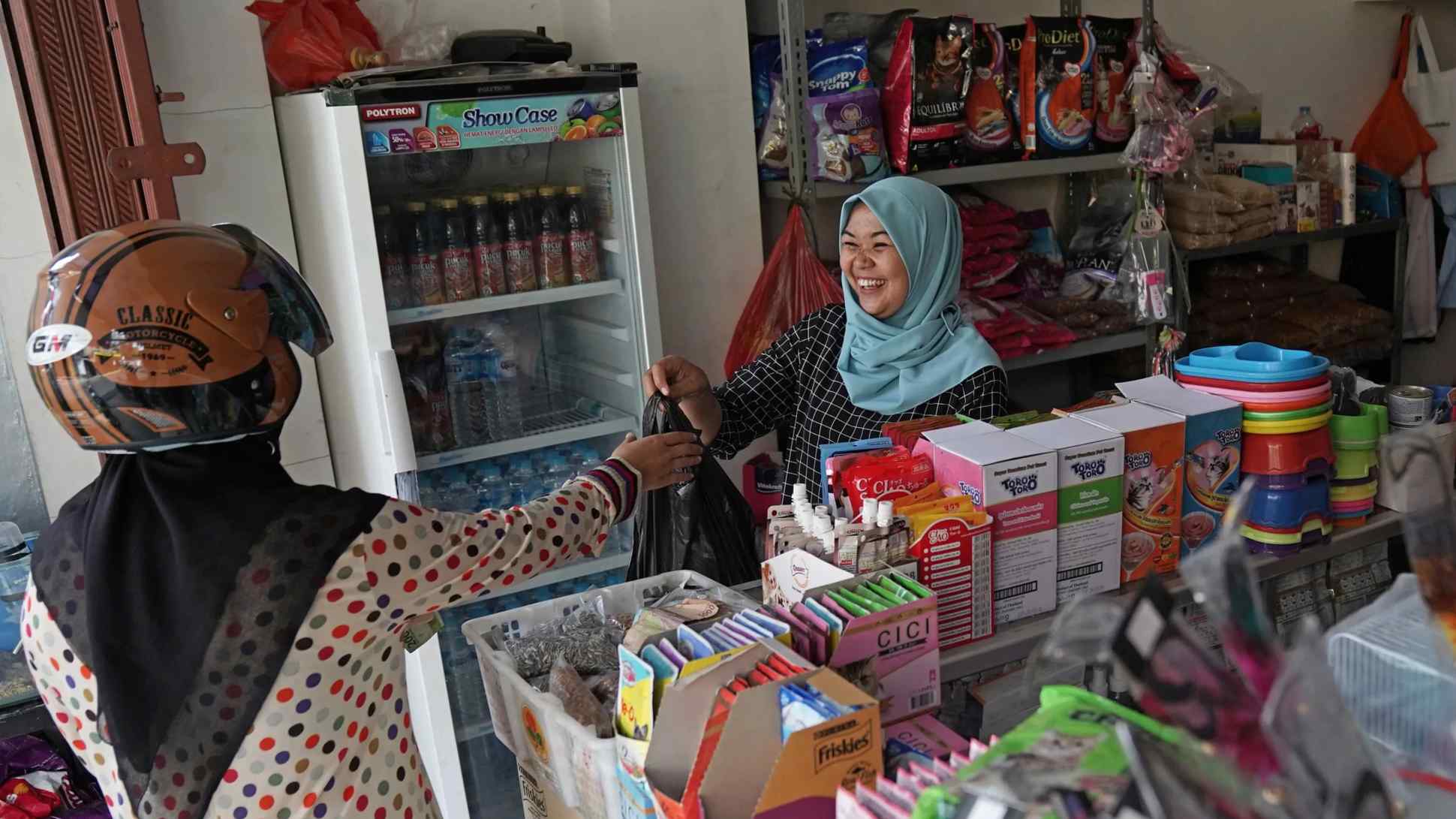 Modalku focuses on financing for smaller businesses, like Sri Cahyaningsih's pet food shop in Jakarta. She had struggled to secure loans until she found the startup online. (Photo by Dimas Ardian)
Startups in Asia

Modalku and regulators learn from China as loans swell past $3bn

JAKARTA -- Harvard Business School students Reynold Wijaya and Kelvin Teo knew they wanted to start a company, they just did not know what kind. Five years later, they find themselves at the forefront of a Southeast Asian peer-to-peer lending market that has been something of a Wild West, but that looks to be entering a promising new phase.

"Kelvin and I ... were looking for ideas of businesses that had the potential to become very big and impactful enterprises," Wijaya told the Nikkei Asian Review recently, sitting cross-legged in a cozy lounge at the West Jakarta office of the company the duo founded, Modalku. "We saw the answer in fintech. Which segment of fintech though? We felt that lending is an interesting market."

P2P lending connects individual or institutional investors with people or small businesses that need money. Although interest rates are higher than those charged by banks, they are typically lower than what loan sharks demand. And the market is exploding: In Indonesia alone, cumulative loans hit 44.8 trillion rupiah ($3.1 billion) in June, versus 284 billion rupiah in 2016, according to the country's Financial Services Authority, known as the OJK. The number of borrower accounts totaled 9.7 million, up from less than 40,000.

Wijaya and Teo established a lending platform called Funding Societies in Singapore in 2015, in the middle of their two-year program at Harvard. In January 2016, a few months before graduation, they entered Indonesia under the Modalku name, which means "My Capital" in the local language. Since then, the group has dashed to the front of a crowded field, capitalizing on the huge financing needs of micro, small and midsize enterprises (MSMEs) in Southeast Asia's largest economy, which remain underserved by traditional banks.

The group's cumulative loans reached 8.06 trillion rupiah as of Friday morning, up 35-fold from the end of 2016, while borrower accounts swelled to 884,000 from under 300. Each number is equivalent to roughly one-tenth of the overall market in Indonesia, which has powered the bulk of the startup's growth and is now home to more than half its 400-plus group employees. Wijaya -- whose parents run a variety of midsize businesses, from milk candy production to construction -- and the Malaysian-born Teo had pitched their idea at a Tech in Asia competition in Tokyo in 2015. This brought 1.7 million Singapore dollars ($1.2 million) in seed funding from Indonesian venture capital firm Alpha JWC Ventures and Singapore Press Holdings, publisher of the Straits Times newspaper.

Sequoia India and other investors pumped SG$10 million into the group in a Series A round in mid-2016, and SoftBank Ventures Asia led a $25 million Series B round less than two years later. Together, Modalku and Funding Societies have raised $42.5 million to date, according to startup database Crunchbase.

The investors saw the same thing Wijaya and Teo did: an Indonesian market with 63 million MSMEs, only 26% of which have access to financing, according to government data. A study by the OJK in 2016 estimated that those businesses' annual unmet financing needs totaled 988 trillion rupiah. Similarly, only 29% of Indonesia's 186 million lower- to middle-income working-age individuals have access to credit.

This gap has attracted a horde of P2P players, legitimate and unscrupulous alike. As of June, 113 lending platforms were registered with the OJK, while the number of illegal operations is estimated at over 1,000. The authorities say many hail from China, where a crackdown on delinquent P2P platforms that began in 2017 sent some searching for opportunities elsewhere. The OJK said it has shut down 900 P2P lending websites and smartphone applications, but it is playing whack-a-mole. "We shut them down in the afternoon, they will open again the next morning" using different websites or apps, OJK Chairman Wimboh Santoso said in July.

Wijaya, who is 30, sounded confident Modalku can fend off rivals and steer clear of controversies.

He said the company works closely with the OJK to ensure compliance and insists on "responsible lending," carefully screening borrowers' applications and limiting risk by targeting only MSMEs, not consumer loans. Its nonperforming loans stood at 1.23% as of Tuesday. The co-founder said he fully supports the OJK's efforts to root out illegal players but welcomes competition.

"The market is huge, so it can support many players," Wijaya said. "Competition will make us grow better."

Modalku works a lot like other platforms. Its credit scoring system assesses borrowers' creditworthiness, determining whether the risk warrants a higher or lower interest rate and helping lenders make decisions. Artificial intelligence, Wijaya added, is used to handle the growing number of loan requests -- applications from people like Sri Cahyaningsih, who owns a small pet food shop in South Jakarta.

Cahyaningsih said she discovered Modalku after struggling to secure loans and searching for options online. "I clicked, and there was a form asking how much I wanted to borrow," she said. She filled in 5 million rupiah and "it was approved."

"There is a chance for P2P lenders to become unicorns"

On the other side are Modalku's lenders, who number more than 100,000. Most are individual millennials investing for the first time. This demographic is driving the overall industry's growth: 70% of the nearly 500,000 lenders registered with Indonesia's P2P platforms are aged 19-34, according to the OJK.

"We have to maximize the funds that we have," said Karen Christianti, a 26-year-old co-founder of a wellness startup in Jakarta and a Modalku lender. Christianti decided to invest "despite the risks, as long as the return is interesting." Interest rates on Modalku run between 12% and 20% per annum. It charges a 3% commission on each loan.

Despite the swarm of platforms, one of Modalku's original backers is convinced the venture has what it takes.

"Being one of the first movers, Modalku has the advantage of time" to tailor its services to the market, including "loan types and credit scoring," said Chandra Tjan, a managing partner at Alpha JWC. "The financial inclusion cake is big enough for many players, and Modalku is on track to keep being the industry leader in the foreseeable future."

Wijaya wants to expand Modalku's MSME clientele, reaching more online merchants through partnerships with some of the region's biggest e-commerce sites -- including Tokopedia, Bukalapak, Lazada and Shopee. The sites' databases of merchant transactions allow Modalku to see which ones have healthy cash flow. The e-tailers get a cut of the commissions.

"Most of the merchants in the partners are actually unbankable," with many lacking a legal entity and collateral, Wijaya said. "At the same time, we all know that they're going quite well. So, by leveraging the data ... we can be more certain that they have good prospects." 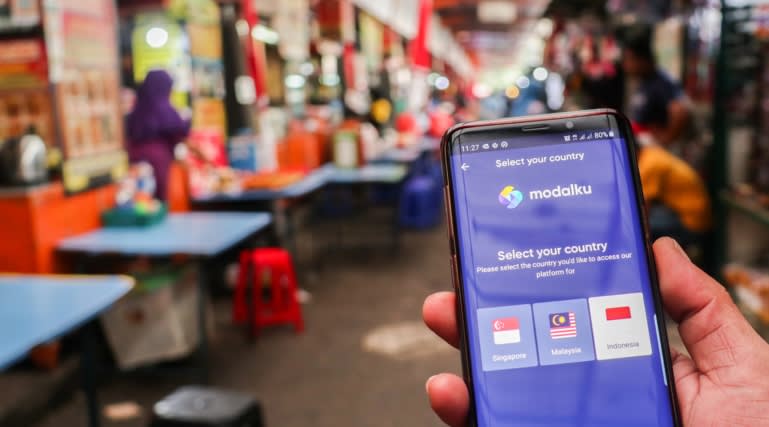 The Modalku app: The startup is keen to partner with banks, many of which used to see P2P lenders as a threat.

Many compare Indonesia's P2P boom to the one in China several years ago, but in a June report, PwC suggested Indonesia is likely to avoid the turmoil that rocked the Chinese industry.

What was once a thriving market in China took a dark turn last year, when the story of a 31-year-old investor who hanged herself after losing nearly $40,000 on the platform PPMiao went viral on social media. The number of platforms dropped 52% in 2018, to slightly over 1,000, and is predicted to dwindle to just a few hundred this year.

Whereas most Chinese players focused on consumer loans, Indonesian platforms seek at least a "balanced mix" of individual borrowers and MSMEs. "Indonesia has benefited from analyzing China's initial mistakes, which has shaped the government to take a more supportive regulatory approach," PwC said, stating that the Indonesian sector is entering a "third wave."

The first wave lasted from 2014 to 2016, when new platforms were testing business models in an unregulated field. The second began when the OJK stepped in to provide customer safeguards.

In the third -- which started with the creation of the Indonesia Fintech Lending Association last October -- the players have a clearer code of conduct and big investors have more confidence to fund or acquire fintech lenders. "Seeing the positive growth of the P2P lending industry, there is a chance for P2P lenders to become unicorns," said Subianto, a partner at PwC Indonesia, referring to startups valued at $1 billion or more. "The chance of the industry consolidating is also very big, given continuing acquisitions of P2P lending [platforms] by other tech players or by the banking industry."

Banks, which once saw P2P lenders as a threat, are starting to see them as potential partners.

"In the past, we had tried to enter the [MSME] segment, but we ... left because we couldn't handle them well," said Parwati Surjaudaja, president of OCBC NISP, the Indonesian unit of Singapore's Oversea Chinese Banking Corp. "The segment requires specialization. Now as a bank, we can provide funds to the P2P lenders. We can offer expertise in risk management."

Funding Societies has a partnership with DBS Bank in Singapore, while Modalku has teamed up with Bank Sinarmas, run by Indonesian conglomerate Sinarmas Group. Wijaya said he would welcome further partnerships with banks and thinks "it's a bit misleading to see us P2P lenders as a threat, because what we're really doing is catering to the unbanked."

"There's no way we can compete in terms of cost of funds to the banks," he said.

As for Modalku's P2P rivals, Wijaya had a simple message for them: "May the best platform win."