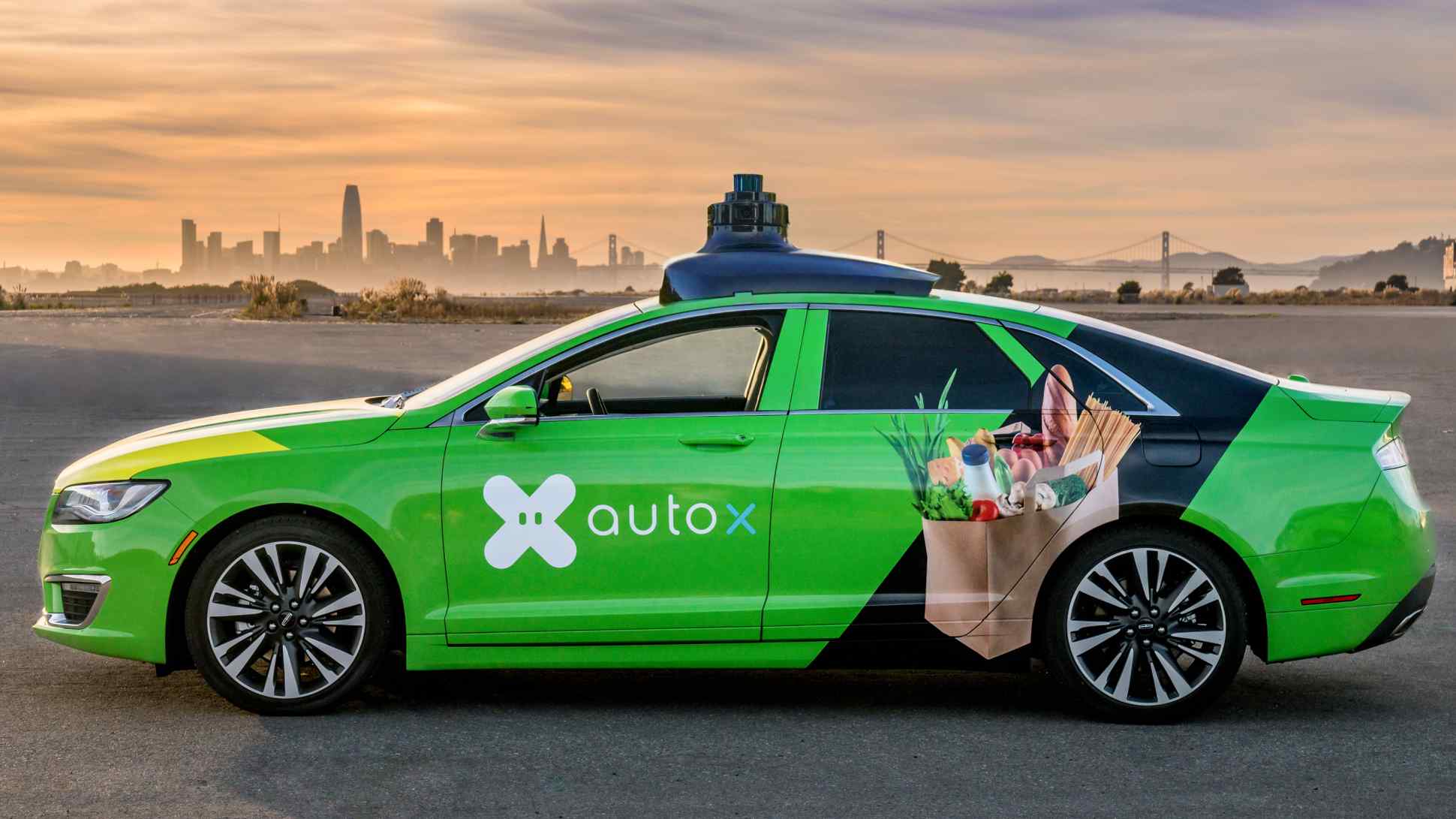 Chinese startup AutoX is one of only four companies to receive a robotaxi license from California. (Photo Courtesy of AutoX)
Startups in Asia

SAN JOSE, U.S. -- Xiao Jianxiong never visited a beach until he was 18, despite the fact his childhood home was only 20 miles from the sea.

His hometown of Chaoshan, in China's Guangdong Province, was a poor fishing village until recently. Growing up without much money, Xiao's family couldn't afford a car trip to the beach.

Today Xiao is hopeful that his company -- AutoX -- will give kids the opportunities he didn't have by making it easier and cheaper for them to get around by car, even if their parents are not able to drive them.

"Autonomous driving should not be a luxury," Xiao said in a 2017 speech when he was named one of the "35 Under 35" by the MIT Technology Review.

Then 33, Xiao was one year into his journey of founding his self-driving car company with the goal of democratizing the autonomous driving industry.

Before becoming an entrepreneur, Xiao was an assistant professor at Princeton University, where he served as the founding director of the Princeton Computer Vision and Robotics Labs from 2013 to 2016. It was around this time he picked up the nickname "Professor X," as many of his associates found it difficult to pronounce his Chinese name.

Having made a name for himself in academia, Xiao received an offer from Ford to lead its autonomous driving research unit. He turned down the U.S. auto giant and in the spring of 2016 flew to California, where he set up an office in a small single family home in San Jose. The living/dining room served as the office, and a bedroom was converted into a conference room.

"I was a one-person army back then," Xiao said.

That one-person army soon grew. As a pioneer in autonomous driving research, Xiao quickly gathered a group of Chinese scientists from institutions and companies at the forefront of artificial intelligence research, including MIT, IBM and Facebook. Three years later, Auto X has grown into a global team with 130 employees. Many China-born, U.S.-educated entrepreneurs choose to start their ventures in China, a market they are more familiar with and whose costs are lower. Xiao, however, started in Silicon Valley, and AutoX's main research center is still at its San Jose office -- which now occupies an entire building.

"All the best talents in the industry are here. China is catching up, but still has a few years to go. Right now, you have to be in the valley to scoop up the best people," Xiao said.

In June, AutoX became one of only four companies to receive a robotaxi license from California. Although more than 60 companies have a permit to test their autonomous cars in the state, the license allowing companies to transport people in self-driving cars is much harder to obtain.

One measure of safety is how frequently a self-driving system must disengage and a human driver take over to avoid a collision. According to California Department of Motor Vehicle data, AutoX is in the top 10 among more than 60 companies for average miles driven between disengagements. AutoX also has no reported collisions, according to the DMV's website.

But despite receiving a license, Xiao said his company does not have any immediate plans to launch commercial robotaxi services in California, though it does offer grocery delivery services in a limited area in San Jose in partnership with local restaurants and grocery services.

"We applied for the robotaxi license just to prove that we can do it and add credibility to our technology," Xiao said.

Sitting in one of AutoX's robotaxis during a test ride in San Jose, Xiao told the Nikkei Asian Review that he does not see much point doing road tests in California.

"It's too easy," he said, pointing to the empty road.

Traffic conditions in California and many other states in the U.S. are not overly complicated. Drivers and pedestrians generally obey traffic rules, and the population in most areas is spread out, which means less traffic congestion. While this is good news for human drivers, it is less helpful for developing autonomous cars, which need to learn and adapt by collecting data from different situations.

Indeed, in the 20-minute test drive, AutoX's robotaxi only had to hit the brakes hard once, when another car suddenly backed out from a parking spot. The rest of the ride was smooth, averaging 65 miles per hour with several stops at traffic lights and few if any other cars on the road. AutoX relies more heavily on cameras than on other types of more expensive sensors. (Photo Courtesy of AutoX)

China is a different story.

In a video shown to Nikkei, AutoX was testing its car in the central business district of Shenzhen, where Chinese tech giants such as Tencent and Baidu have their offices. There were cars making sudden stops, pedestrians jaywalking in areas with no traffic lights, and small scooters running red lights. AutoX's test car successfully navigated through all the traffic conditions, with no human driver interference.

AutoX says it is the only company in China that has tested self-driving vehicles in a busy metropolitan areas, something it attributes to its strong technology and a good relationship with the government.

"Authorities in China have taken a more conservative approach to public-road testing of autonomous vehicles -- probably a good thing, as traffic conditions in China are more chaotic, making the likelihood of serious accidents at this early stage much greater," said Mark Natkin, founder of research consultancy Marbridge Consulting in Beijing.

"It will take driverless vehicle firms in China longer to refine their respective technologies to the point that they can safely navigate all the different scenarios here, but in the process, they will end up with a stronger product that could be deployed almost anywhere in the world," he added.

In addition to the trial-by-fire nature of road testing in China, Xiao says Chinese self-driving companies have another advantage: a government that shields them from foreign competitors.

"Maybe not many people think this way, but the autonomous car is a national security issue," said Xiao.

With all the cameras and sensors embedded in self-driving cars, foreign companies would be able to easily map out a city in China, something Beijing would be less than happy about. Xiao also gave a more extreme hypothetical scenario, in which a self-driving vehicle could be remotely controlled to create a roadblock, or even hit certain targets or carry bombs.

"For this [national security] reason alone, China and the U.S. should and probably will have totally separate autonomous car industries," he said.

Despite the alarming concerns he raised, Xiao said AutoX has not encountered any difficulties operating in the U.S. But while Silicon Valley will remain an important R&D center for the company, AutoX "is expanding everywhere but the U.S.," he added.

"The competition in the U.S. is too intense, and Waymo is way ahead of everyone else," Xiao said, referring to the company owned by Google parent Alphabet that has become a leader in autonomous driving. "We want to first conquer everywhere else and save the U.S. market for the last."

Unlike other ambitious startups, which usually position themselves as challengers to the big names in the auto industry, AutoX has chosen a strategy of avoiding direct competition and focusing on less costly battlegrounds.

"Not many can afford to burn through all that cash and build an entire self-driving fleet like Waymo, which is backed by Google," Xiao said. While AutoX is loss-making, it says it is losing money much less rapidly than its competitors.

And limiting costs is important if AutoX is to realize its goal of "democratizing" self-driving cars.

That is why, the company says, its proprietary technology relies more on cameras rather than more expensive types of sensors, such as lidar, to detect surrounding objects and navigate roads.

Another thing that sets the company apart from most other self-driving startups -- including Chinese peer Pony.ai, which reached unicorn status last year -- is its business model. While others aim to build their own fleet and eventually provide robotaxi or autonomous delivery services to customers, AutoX has no intention of building its own cars. Instead, it focuses on business-to-business solutions, meaning its target customers are companies that will buy its technology for their own use.

To bring down costs further and attract enterprise customers, AutoX partners with established automakers to integrate its technologies into their cars. This approach obviates the need to spend large amounts of money purchasing vehicles to build a test fleet. It also helped bring in strategic backers. The company announced in April that it closed a round of fundraising that brought in over $10 million dollars, led by one of China's biggest automakers, Dongfeng Motor. SAIC Motor, another state-owned carmaker, has also injected capital in the company. Other backers include venture capital firm Capital Today and semiconductor giant MediaTek of Taiwan. Xiao said the company is close to announcing another round of funding that will be as high as $100 million.

The company declined to disclose its valuation. A public listing, Xiao said, is at least three or four years away.

Now headquartered in Hong Kong, the three-year-old startup is aiming for something bigger outside China. In July, AutoX announced a partnership with NEVS, a Swedish electric vehicle manufacturer, and is planning to deploy a pilot robotaxi service in Europe by the end of 2020.

"Europe is a very fragmented market, and it's not very efficient to take one country after another. We'll go wherever our partners go," Xiao said.

In Asia, the company said the next market it is eyeing is Japan, though it has no immediate plans to open an office in the country until they find the right local automaker to partner with.

"Japan's auto industry has always been advanced, but self-driving there still has a huge space left to fill," Xiao said.