India is dotted with around 6 million neighborhood stores, known as "kirana." StoreKing is turning them into e-commerce hubs.   © Reuters
Startups in Asia

StoreKing lures Amazon by connecting the dots of rural India

MUMBAI -- They call it the "red bike village." In Sridhar Gundaiah's hometown in the south of India, all 150 households own a red Hero Splendor motorbike.

This is not just a matter of keeping up with the neighbors.

For Gundaiah, the red bikes hold deeper lessons that he took to heart in 2012 when he set up StoreKing, an e-commerce platform aimed squarely at India's 800 million rural residents. Unlike typical online retailers that deal directly with consumers, StoreKing sells through a vast network of local mom-and-pop shops -- a business model that has attracted the likes of Amazon.com to forge tie-ups.

The Splendors helped Gundaiah recognize the power of villagers to influence one another. The residents of Hanchipura are "not buying to challenge others," he said. The mindset is simply, "One has a bike, I will also buy another bike like you."

More importantly, perhaps, he noticed how much local retailers guide residents' purchasing decisions. Customers rely on local store owners' opinions on everything from motorbikes to skin care products. "We know [the merchants] by name, we know what they've been doing," Gundaiah said. "It became very clear that an end customer will piggyback on what the retailer is saying."

So when Gundaiah established StoreKing in Bangalore, he decided to make rural shops the core of his business. This could prove prescient as Prime Minister Narendra Modi's government tightens rules on major e-commerce players to protect smaller retailers, with new regulations to take effect on Feb. 1.

"We started out saying, 'Can we give retailers enough power to start educating customers about accessing technology, digitalization, bank transfers?'" Gundaiah recalled. "So we became a distribution channel for companies, but largely driven by assistance" from local merchants.

This way, StoreKing is able to connect more Indians with the sea of e-commerce shopping options.

The shopkeepers are provided tablets with a catalog of mostly discounted products. Customers come into a shop, choose from the catalog and pay the merchant.

The merchant then places the order through StoreKing's app. A few days later, the products are delivered to the shop, ready for pickup. The retailer receives a commission for facilitating the purchase. 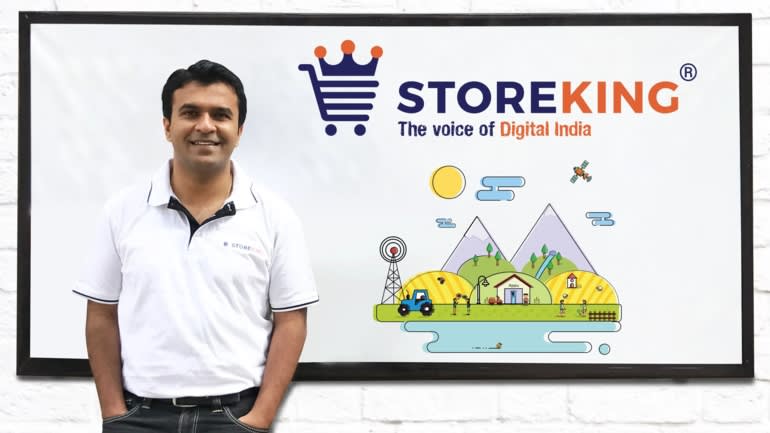 StoreKing founder and CEO Sridhar Gundaiah noticed how much rural residents depend on local shopkeepers' advice -- and built his business model on this realization. (Courtesy of StoreKing)

Many consumers may not even know StoreKing has changed their lives.

Renuka, a 36-year-old woman in a village 110 km southwest of Bangalore, had seen StoreKing billboards but was unaware she was using it. What she did know was that shopping and other tasks had become less of a chore.

"Recharging mobile phone talk time and transferring money has become a lot easier," she said, explaining that she used to have to go to the town of Mandya, 20 km away. "I can also get stationery items like Camlin sketch pens for my children at the village store and the Lakme foundation I saw on TV."

Before StoreKing came along, her village store sold only basic shampoos and soaps. Shopping online herself was not an option, since her feature phone allows her limited access and e-commerce companies have yet to deliver directly to her area.

Renuka lives in one of the roughly 650,000 villages that dot the Indian countryside. These villages account for around 70% of the country's population. Startups like StoreKing and global giants like Amazon and the Walmart-backed Flipkart could be looking at a $10 billion to $12 billion rural market over the next four years, according to E&Y India. The obstacles are just as big. Logistics challenges, language barriers, insufficient infrastructure, limited access to smartphones and high delivery costs are all factors that make it difficult to cover the "last mile" to doorsteps.

StoreKing, though, seems capable of sidestepping many of these issues. Language is one.

"We have pushed tech to another level because the app that we have given to the end retailers is available in vernacular languages -- Tamil, Telegu, Kannada and Hindi -- to ensure retailers can understand."

The company says it does business in 10 states and has 40,000 retailers on board, already putting 215 million consumers within reach. It hopes to go nationwide in the next couple of years, building ties with more of the estimated 6 million neighborhood kirana stores found across rural India. Nevertheless, Gundaiah, who holds a master's degree in internet technologies and e-commerce from Greenwich University, found it difficult to persuade Indian investors to put up money for his company. They were not convinced that a newcomer like StoreKing could add value to an e-commerce market where Amazon and Flipkart had already staked claims.

In the beginning he relied on seed money from Luxembourg-based Mangrove Capital Partners. Malaysia's Axiata Group invested $16 million in the venture in 2016, and the two backers now own a combined 57% to 58% of StoreKing.

Is it only a matter of time before bigger investors come knocking? Forrester Research analyst Satish Meena thinks so.

Meena reckons the company's inroads into rural India could make it a target for the e-commerce giants. He sees Amazon's tie-up with the company, under which the pair run small co-branded stores where customers can shop online, as a trial for the American company to gauge StoreKing's strength before making a buyout offer.

StoreKing already has "big enough scale that e-commerce companies are looking for," Meena said. "The co-branding is one of the initiatives that they have taken to test the waters. They want to go beyond co-branding."

A stake in StoreKing could help Amazon grow in India despite the government's February clampdown, which will ban e-commerce companies from selling products through companies in which they hold an interest. StoreKing would present a loophole because its model is technically business to business, a segment not impacted by the new rules.

Meena said Amazon might take time to assess the impact of the regulations before moving forward with any kind of investment, and that for now it might depend on its existing partnership with StoreKing.

"The new e-commerce regulations have put companies such as Amazon in a bind," Meena said. "So, even though it might have acquisitions of companies such as StoreKing in mind, it will want to make sure it doesn't get into any kind of regulatory trouble."

The partnership with Amazon includes 350 to 400 stores, which are little more than shops with desktop computers and fitting rooms. Customers use the PCs to choose products online. The orders are shipped to the shops, where they can be tried on and returned if the customer is not satisfied. 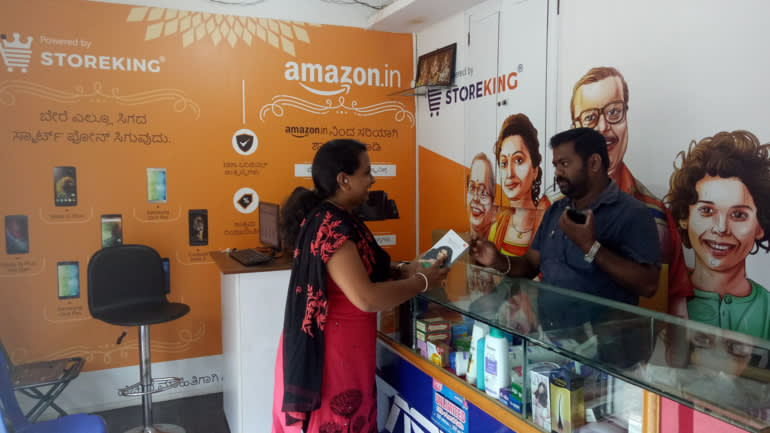 StoreKing and Amazon are running hundreds of stores like this one near Bangalore, where customers can place orders online, try on clothes and return items. (Photo by Rosemary Marandi)

Even in this arrangement, the parcels do not go directly to the end customer, allowing Amazon and StoreKing to avoid expensive deliveries. Amazon pays StoreKing a commission for the leads it generates, and StoreKing gives the store operators a cut of the fee. Gundaiah said the joint stores make 30,000 to 35,000 rupees ($425 to $496) a month, respectable sums for rural India.

Gundaiah recalled meeting with an Amazon team in 2014 and receiving a positive reaction. "They visited our stores the very next week with their senior management and we had a fruitful discussion," he said. "We launched a pilot with Amazon in 2015 and exclusive stores in 2016." Also in 2016, StoreKing made a deal with digital payments startup Paytm.

"Since many customers don't have active bank accounts, they cannot load money into Paytm wallets," Gundaiah explained. "StoreKing retail store owners transfer money from their accounts to the wallets of the customers and take cash in return." The funds can be used anywhere Paytm is accepted -- not just the store where they are loaded.

A similar arrangement with India's largest bank, State Bank of India, has created a cash-dispensing network -- again with shopkeepers in the middle. A customer can walk into a StoreKing-linked outlet, swipe an SBI debit card on a device, and the retailer will hand over the requested amount of cash.

To further expand its footprint, StoreKing helps rural retailers secure working capital from microlenders such as Capital Float and Cash Suvidha. It aims to help around 75,000 merchants obtain 10 billion rupees worth of funding by the year ending this March.

Manoj Kumar, for instance, plans to invest 100,000 rupees to open an appliance store in his native village of Kodiyala in Karnataka. Essentially a farmer, the 28-year-old sells mobile phones out of a small shop in association with StoreKing. He sells around 30 feature phones a month, priced at 1,500 to 3,000 rupees.

Asked about StoreKing's earning potential, Gundaiah said he hopes to turn a profit by 2020. He said the company had a positive cash flow and a top line of 12 billion rupees at the end of March 2018. A strict insistence on upfront payments rather than cash on delivery -- for retailers and end customers alike -- has helped StoreKing maintain a healthy flow of working capital.

The founder does not see many direct threats from competitors. Only a handful of e-commerce companies are focused on the rural market, including IPay India. 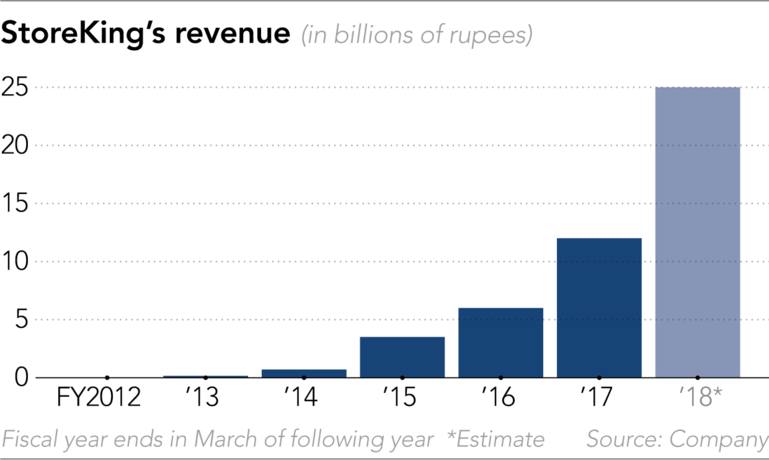 IPay, like StoreKing, is an assisted e-commerce platform, though it delivers to both stores and customers' homes. Data insights company Owler says IPay India is one of StoreKing's primary rivals but generates $34.6 million less revenue.

And Gundaiah is not worried about the big fish taking over India's huge pond anytime soon. He sees a flaw in Amazon's approach of bypassing physical retailers. The model is "only built with end customers [in mind]," he said. "Unfortunately, they have not been able to capture the rural market."

In Gundaiah's view, the only real challenge may be taking his concept nationwide due to the nature of India itself. "With India being a diversified country, it requires time and understanding of the diversified geography to launch StoreKing," he said.

He still sounds confident his philosophy will carry StoreKing where he wants to go. "Logic will get you from A to B," he said. "Imagination will take you everywhere." 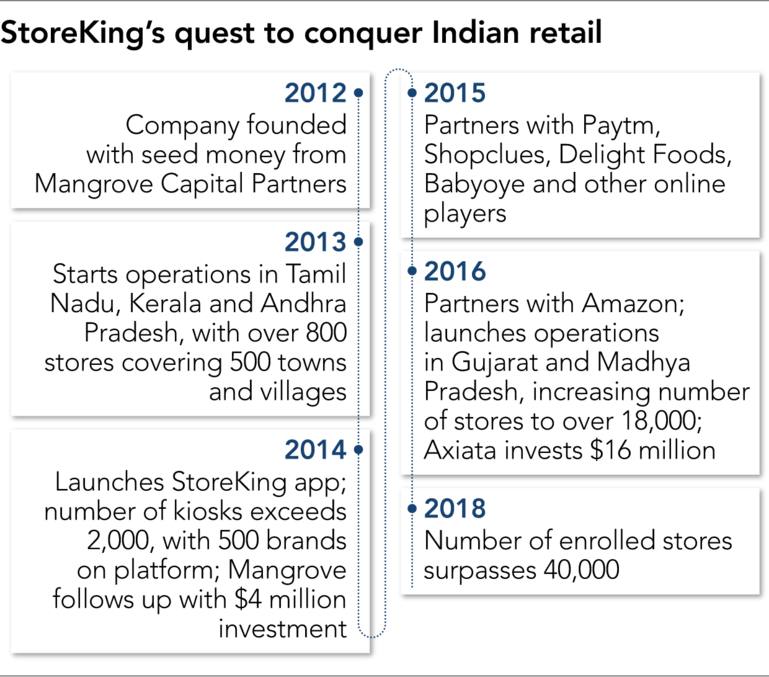