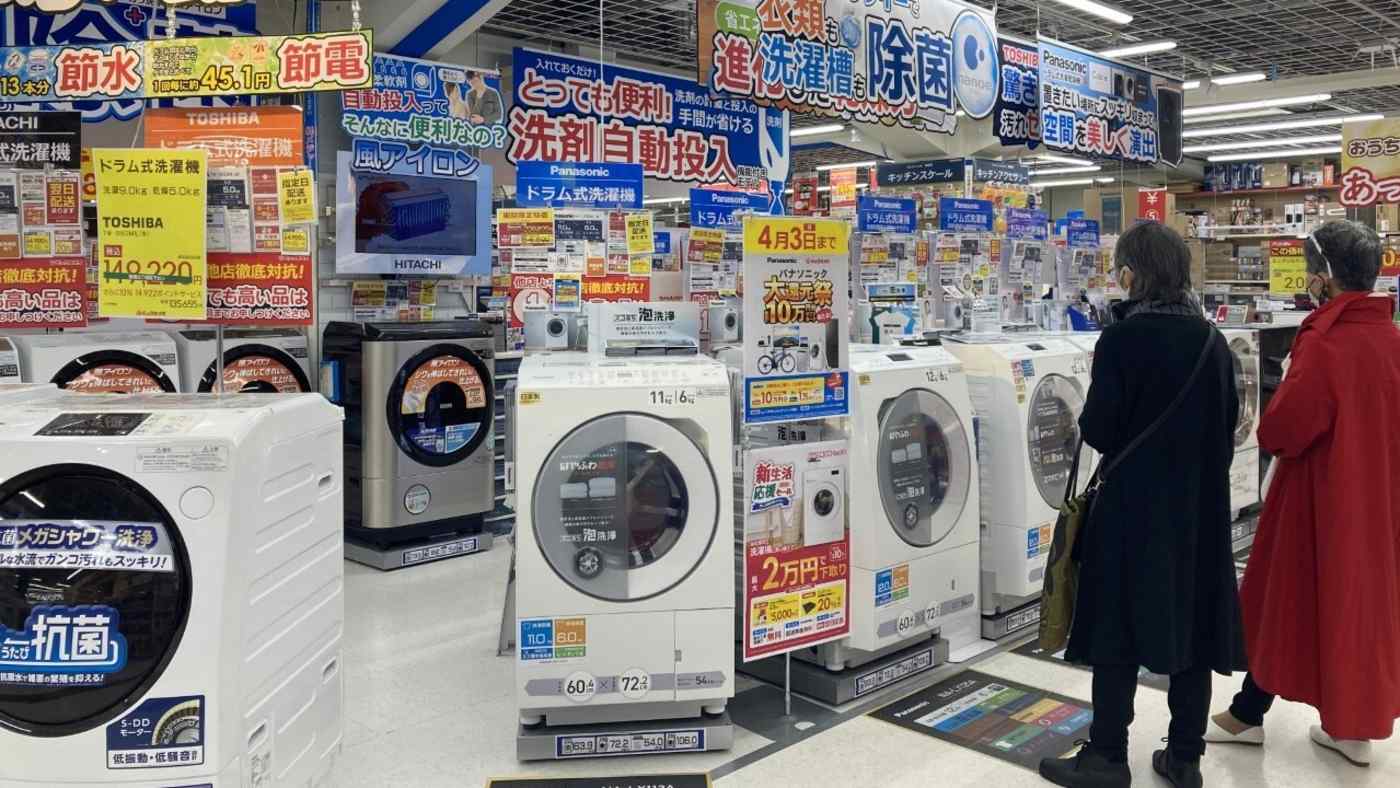 TOKYO -- Home appliances remain in short supply across Japan due to the global semiconductor crunch and supply chain disruptions tied to Beijing's zero-COVID policy, as companies that have resumed production at factories in China say it will take time to reach normal operations.

"Delivery delays began to emerge in May, and we have been telling customers that they will have to wait one to two months for delivery," said a sales staffer at an electronics retail shop in Tokyo.

Microwaves and rice cookers on store shelves carry signs saying that new orders are suspended due to a halt in shipments. Some appliances already owned may be difficult to repair because parts no longer are readily obtained.

Washing machines are particularly mired in short supply. One retailer website shows that 70% of the 40 drum-type machines listed are out of stock, with tags saying "items will be shipped as soon as they arrive." Some machines, including those from Hitachi and Sharp, are scheduled to ship in August or later.

About 30% of refrigerator models also are cold out of stock.

Air conditioners are feeling the heat as well. Supply was already unstable due to the chip shortage, but the approaching summer season has made the problem clear.

"It's a cause for considerable concern that this uncertain situation will continue at such an important time of the year when demand is expected to increase," said an official at one retailer.

On shopping websites, shipments of some models are scheduled for early September, meaning these manufacturers will miss the entire summer.

Home electronics retailer Joshin Denki, whose stores serve the Osaka region, continues to face a shortage of items such as microwaves. The company is increasing its lineup of products from manufacturers capable of delivering them.

"The impact of the lockdown in Shanghai has been significant, and the supply network still seems to be in disarray," the retailer said.

Hitachi has suspended sales of some washing machine models since the end of April. Delays in parts deliveries from China hamper production at Japanese plants, the company said.

Mitsubishi Electric postponed the May 21 launch of its new rice cooker model.

"Delivery of parts from suppliers in Shanghai has been delayed, and we are unable to produce a sufficient quantity of products," said the company, which expects to debut the model in a month or two.

Panasonic has suspended production of some washing machines at its plant in eastern Japan's Shizuoka Prefecture since mid-April due to the shutdown of a client factory in China that makes parts. The company's Shanghai plant also has been shut down, causing delays in the delivery of some microwave models to electronics retailers. The impact has spread to a wide range of products, including rice cookers and massage chairs, for which new orders on some models have been halted.

Shanghai said Monday its lockdown would be lifted beginning Wednesday. But with China sticking to its zero-COVID policy, supply disruptions are likely to continue. In a survey by research firm Teikoku Databank, 48% of Japanese firms said the Chinese lockdown would have a "negative impact."

"As long as the Chinese government continues its zero-corona policy, there are no prospects of a normalization of the supply chain," said Yuji Miura, a senior research fellow at the Japan Research Institute who is familiar with China's manufacturing industry

"Companies need to identify risks in China, including those at the end of the supply chain, and secure alternative sources of procurement and production in case of an emergency," he said, noting that sporadic disruptions in various cities remain possible.