Taiwan's UMC hunts for acquisitions as China closes in

Bullish chipmaker focuses on 5G and its fastest-growing markets, South Korea and Taiwan HSINCHU -- Taiwan's United Microelectronics Corp., the world's fourth biggest contract chipmaker that supplies Qualcomm and Sony, said it is open to more acquisitions amid a wave of consolidation in the sector.

UMC President S.C. Chien told the Nikkei Asian Review that while rising competition from Chinese manufacturers was a concern, he remained bullish about 2020, with rising revenue expected to return the company to growth as it focuses on key markets in South Korea, Taiwan and the U.S.

"For expansion, if there are any chip plants that are for sale, we will definitely evaluate them," Chien said in an interview. "Currently, buying is much more effective and efficient than building a new plant and that fits our growth strategy to build cost-effective production capacity to be more competitive."

UMC's upbeat outlook came as the U.S. and China prepare to ink the first-phase of an agreement on January 15 to defuse a damaging 19-month trade war, and as Washington considers further measures to prevent sensitive electronic technology from falling into the hands of rival powers such as China, and top Chinese companies such as Huawei.

Based in the Taiwanese city of Hsinchu, UMC is facing mounting competition from smaller Beijing-backed rivals such as Semiconductor Manufacturing International Co. and Hua Hong Semiconductor, which have been tasked with helping China cut its dependence on foreign chip suppliers amid its battle with the U.S. for global tech supremacy.

"Demand will pick up especially in the second half of 2020," said Chien. "The growth driver will come from several fronts including radio frequency chips for 5G smartphones as well as driver integrated circuits for advanced OLED displays, a type of popular panel for high-end phones."

Seen as a major casualty of the U.S. -- China trade war, Chien said UMC now hopes to focus on expanding its markets in South Korea and Taiwan, the world's two largest economies by chip revenue after the U.S.

"Looking forward, we will stay more focused in markets that we are good at rather than risk huge investment on something that's uncertain," Chien said, adding that the company's capital spending this year would use on last year's $700 million budget as a reference base, but which could be adjusted "according to market demand." 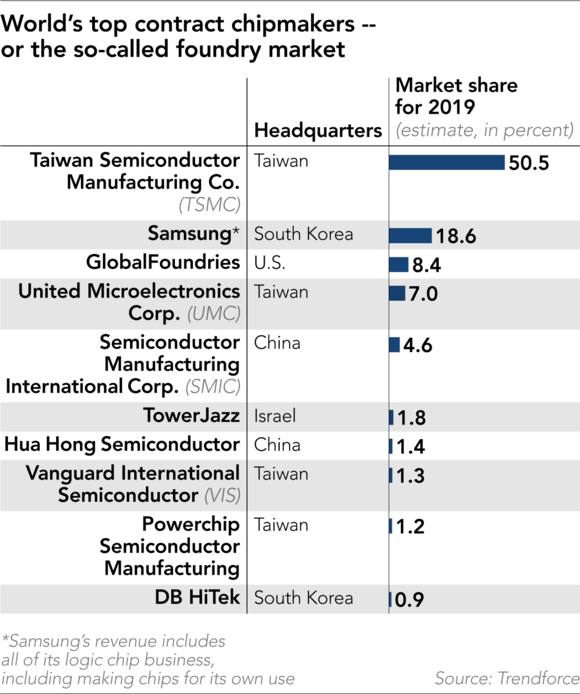 Chien said the 10% rise in production capacity that will come with the completion of its $500 million acquisition of an advanced chip facility from Japan's Fujitsu Semiconductor, as well higher demand for chips used in advanced displays, 5G applications and other devices such as wireless earbuds, would also help to boost sales this year.

"However, there are still a lot of geopolitical uncertainties so we still need to be cautious," added Chien. "And that's the most concerning issue for 2020."

UMC's market share will also face further challenge from Taiwan Semiconductor Manufacturing Co., the world's biggest contract chipmaker with more than 50% of market share, as well as deep-pocketed memory chip giant Samsung Electronics, which aims to expand its presence in the so-called foundry market, where manufacturers supply chips on contract to other companies.

The U.S. market still accounts for around 33% of UMC's total revenue, while the Asian market -- including Taiwan and South Korea but excluding Japan -- contributed around 60%.

"Currently, we found that our most-rapid growing market is orders from South Korean and Taiwanese chip design companies," said Chien. "We do find the numbers of Chinese customers increased a lot but most of them are still relatively small. Our revenue from China is roughly 10%."

Many of UMC's smaller industry peers have also invested in expansion to stave off competition.

Arisa Liu, a veteran semiconductor analyst at the Taiwan Institute of Economic Research, told Nikkei that because the tech battle with Washington was making it difficult for Chinese companies to take over international chipmakers, now was a good time for companies such as UMC to consider more acquisitions.

"It's a good opportunity and good timing for other chipmakers including Taiwanese players to look for good deals out there to grow its own competitiveness," said Liu.

In the long run though, Liu said UMC could still face fierce price competition from China.

"Its government-backed rivals have advantages to secure orders from the massive domestic market as most Chinese companies now hope to aggressively cut reliance of foreign suppliers and use local suppliers."