Thai Airways is among the Asian airlines worst-hit by rising oil prices. (Photo by Kosaku Mimura)
The Big Story

HONG KONG -- While the tech sector is facing turbulence, Asian bank earnings are on an upswing. The standouts are Singaporean lenders -- DBS Group Holdings, United Overseas Bank (UOB) and Oversea-Chinese Banking Corp. (OCBC) -- all of which have recently recorded double-digit growth in net profits.

On top of the rising interest rates that have improved profits for many of their peers in the region, Singaporean banks enjoyed a special boost from the stronger oil market. Oil and gas drilling industries are a key sector for the city-state's economy, so local lenders' fortunes are closely tied to fluctuations in the market. During the oil slump that began in 2014, the banks faced substantial pressure on their loan books.

But the rise in Brent crude oil to over $80 per barrel last October -- it had fallen below $30 in early 2016 -- has helped the oil and gas-related industries. For DBS, the largest lender by assets in the Association of Southeast Asian Nations, return on equity reached 12.1%, a level rarely seen since 2007, a year prior to the global financial crisis. CEO Piyush Gupta said his bank is "in good stead to navigate the challenges of the coming year."

David Lum, analyst at Daiwa Capital Markets, believes that "during this period of economic-growth uncertainty, we see banks as a good 'store of value.'" The flip side of higher oil prices

The surging oil price may have helped Singapore's banks, but it is hurting big fuel-consuming companies -- especially airlines.

Last year should have been good for Thai Airways International. Bangkok reigned as the world's top travel destination for the second year in a row, with over 20 million overnight guests visiting the Thai capital -- more than London, Paris and New York, according to a Mastercard survey of some 160 major global cities. Rushing to cope with expanding travel demands, Thai Airways expanded its fleet and passenger capacity. But instead of rising, its passenger count fell by 1%. Compounded by higher oil prices and other expenses, the company's losses ran to 11.62 billion baht ($365 million) last year.

Thai Airways' more efficient competitors were not spared, either.

Korean Air Lines saw its revenue rise, thanks to higher passenger and cargo businesses, but it still lost 80.3 billion won ($70 million) as fuel expenses swelled by 26%. A weaker won aggravated the situation. Two of the big three mainland Chinese carriers -- China Eastern Airlines and China Southern Airlines -- issued warnings that net profit for 2018 would be slashed in half from a year ago, blaming expensive oil and the cheaper yuan.

Even the leaner low-cost carriers were not exempt. AirAsia posted a strong 22% gain in net profit, but its pretax profit excluding benefits dipped 35% as fuel expenses surged by 39%. But the Malaysian airline was quick to tackle the issue, pledging to cut headcount by 10% and close call centers by June. Deputy Group CEO Bo Lingam said they "will be replaced by our automated chatbot."

One rare exception was Cathay Pacific Airways, which on March 13 announced a net profit of 2.34 billion Hong Kong dollars, reversing two straight years of losses -- the result of a bad call on future oil price movements a few years ago. 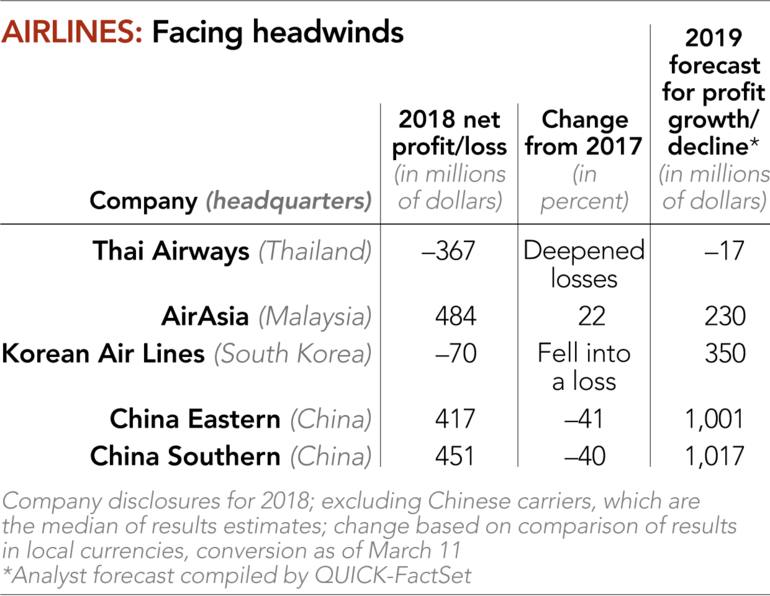 Asia's shipping industry is another sector being hit by rising oil prices. Evergreen Marine's net losses mounted to 398.7 million New Taiwan dollars ($12.9 million), despite revenue increasing by 6% to NT$120 billion for the first three quarters last year. Its Chinese peer Cosco Shipping Holdings is expecting net profit to decrease by 55% to 1.46 billion yuan ($217 million), which it blamed mainly on rising fuel charges, according to a company profit warning issued at end-January.

Of course, the clearest winners from the recent spike in oil prices have been the oil companies themselves. PTT, Thailand's state-owned oil company, enjoyed a 17% increase in revenue to 2.3 trillion baht. Despite being stung by a 90% increase in income tax that dragged down net profit by 11%, earnings before interest and tax were up by 2%.

China Petroleum & Chemical (Sinopec) said its net profit has increased by 22% to 62.3 billion yuan ($9.3 billion) in 2018, in a positive alert to investors. The two remaining state-owned Chinese oil conglomerates, PetroChina and CNOOC, are set to improve their aggregate net profit by a staggering $9.4 billion, according to analyst consensus compiled by QUICK-FactSet.