HONG KONG/TAIPEI/SEOUL -- Apple shocked global stock markets with its Jan. 2 warning that a steep drop in iPhone sales in China would force it to miss quarterly sales targets for the first time in over 15 years. Investors were stunned by the ferocity of the New Year selloff that followed.

But for the Asian technology companies that supply components to Apple and other smartphone makers, it had been apparent for months that something was wrong. From chip manufacturers to panel makers, the final quarter of 2018 was marked by a sudden, swift drop in demand -- particularly in China.

Chipmakers, whose strong performance led to record profitability in 2017, were alarmed by the swift shift at the end of the year, and many are warning that it could linger.

Among them was Nanya Technology, a global DRAM chip provider that competes with Samsung Electronics, SK Hynix and Micron. "We saw a sudden freeze from the demand side since the third quarter of last year and we continue to face price correction in the current quarter," said Nanya Tech President Lee Pei-Ing. "Smartphone sales are not as expected, the server market is digesting inventories, and consumer electronics devices demand is falling too." With the outlook uncertain, Nanya is tightening its belt. The company slashed this year's capital expenditure by half to $10 billion New Taiwan dollars ($323 million) due to slowing demand and trade tension between Washington and Beijing.

According to IDC, global shipments of smartphones in 2018 were 1.44 billion units, down 4.1% from the previous year, marking a second straight year of decline. What hurt the most was a decline of over 10% in China, the world's largest smartphone market.

Last year around this time, analysts were predicting that tech would power Asia300 corporates toward another strong year in 2018. The aggregate net profit of Asia300 companies --- a gauge of leading 330 non-Japan Asian corporations selected by Nikkei -- was expected to increase by 14.9%, following a robust 21.0% growth in 2017.

Now, however, analysts estimate that total net profit growth for 2019 will be 4.4%, according to the latest consensus data compiled by QUICK-FactSet. This reflects a sharp loss in growth momentum, especially during the final quarter of last year. 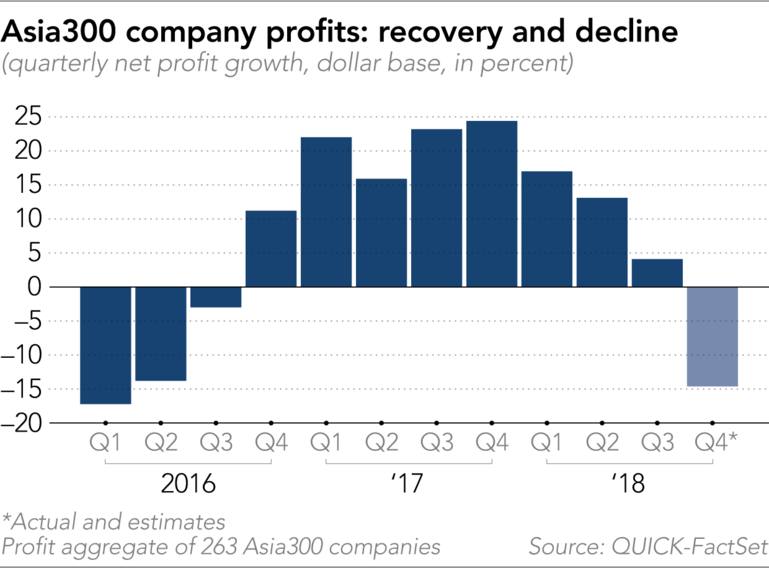 Of the 128 companies that have announced earnings by March 7, net profit growth was down to 5.3%. When analyst forecasts for the remaining companies -- a total of 289 with comparable data going back ten years -- are blended in, the figure comes down to 5.1%.

Even though corporate Asia's bottom line is still growing, much of this is due to strong performance in the first half of last year. After recording 17.0% and 13.1% growth in the first two quarters, it dropped to 4.1% in the third quarter and fell off a cliff to negative 14.6% for the last quarter.

That decline was acute for tech suppliers. The falloff in Chinese smartphone demand was so great that profits at the top three display panel companies -- LG Display, Innolux, and AU Optronics -- saw their net profits fall by a total of $3.7 billion last year.

In the fourth quarter, AUO plunged into net loss of NT$426 million dollars. Its Taiwanese peer Innolux -- the display panel arm of Foxconn Technology Group, formally trading as Hon Hai Precision Industry -- swallowed a net loss of NT$697 million due to a slide in selling prices.

Weakened demand induced price-cutting pressure, which was exacerbated by rising production from Chinese component makers in the second half of last year, according to AUO Chairman Paul Peng. 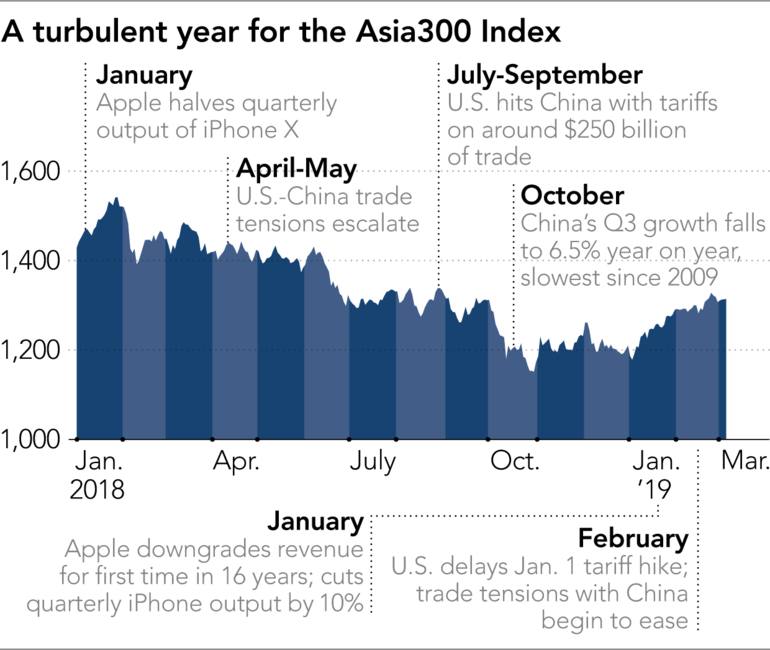 "I foresee oversupply to be the new norm for the panel industry in the next couple of years," Peng told investors in January. "The [business] environment is severely challenging for panel makers, especially when you take the U.S.-China trade frictions into account."

LG Display, which recorded a net loss of 179 billion won ($158 million) for the full year, is cutting its workforce. About 2,000 employees applied for an early retirement program, accounting for 6% of its total workforce so far. To better compete with the new Chinese players, LG is seeking to transform its main panel production from labor-intensive liquid crystal display (LCD) to more automated organic light-emitting diode (OLED). This, the company hopes, will differentiate it from its Chinese rivals, which produce LCDs at a cheaper price.

Japan Display President Yoshiyuki Tsukizaki declared on Feb. 14 that the company would be unable to meet its commitment to complete a turnaround in the fiscal year ending in March. The company is seeking fresh capital injections from potential Chinese and Taiwanese sponsors, and he hinted that there would be personnel cuts.

The semiconductor sector extended its strong run into 2018, with Samsung Electronics, SK Hynix and Taiwan Semiconductor Manufacturing Co. increasing their combined net profits by $8.4 billion in 2018. But the chipmakers may not be immune from the tech and China downturn this year. According to World Semiconductor Trade Statistics, global chip sales in 2019 will be down 3% to $454.5 billion, after rising nearly 14% to reach an all-time high in 2018.

"It seems clear the global market is experiencing a period of slower sales," said John Neuffer, president and CEO of Semiconductor Industry Association in the U.S.

Even though he is hopeful for a recovery by year-end, the downward trend "will continue in the first quarter, as key customers keep adjusting their orders."

SK Hynix Vice President Cha Jin-seok sounded slightly more optimistic than his hometown archrival. But customers for the company's chips used in computer servers have "changed their strategy to maximize efficiency by optimizing their current data centers" after being aggressive investors over the last few years.

TSMC, the world's biggest contract chipmaker, has told investors its revenue could be flat or grow only slightly this year, meaning it will likely miss its target to grow 5% to 10% annually over the five years to 2021.

"Given the macroeconomic outlook in 2019, we are tightening this year's capital spending by several hundred million dollars to a level between $10 billion to $11 billion," said Lora Ho, chief financial officer. TSMC's CEO C.C. Wei said the company is cautious about demand for high-end smartphones -- a comment widely seen as an indicator of lackluster iPhone core processor orders. He also turned very bearish on the outlook for chips used in the power-intensive cryptocurrency mining process -- a big driver of chip sales during the bitcoin boom from late 2017 through early 2018. As the sole supplier to iPhone's core processor chips, the Taiwanese company is particularly exposed to lower demand for the iconic smartphone, the biggest growth engine over the last decade.

"The biggest question that remains unanswered is what will bring the smartphone industry back to growth," said Ryan Reith, program vice president with IDC's worldwide mobile device trackers. "There is no question industry growth has been down for reasons that have already been identified -- longer replacement cycles, a challenged China market, and geopolitical headwinds."

IDC predicts another 0.8% fall in worldwide smartphone sales this year.

The industry leaders are now pinning their hopes on new technology, namely foldable phones -- from Samsung Electronics, Huawei Technologies and Shenzhen-based startup Royole -- and the rollout of fifth generation, or 5G, mobile. 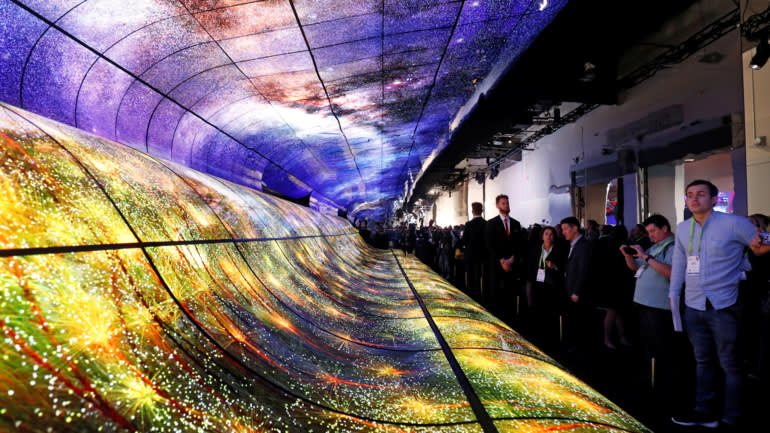 LG is seeking to switch production from labor-intensive LCD to more automated OLED, exhibited here at the Consumer Electronics Show in Las Vegas in January.   © Reuters

The flexible screens took center stage at this year's Mobile World Congress in Barcelona and some Asian carriers are set to roll out 5G services this year. As promising as foldables may seem to be, they have "yet to have a reality check from users," said Sangeetika Srivastava, IDC's senior research analyst.

WitsView, a division of Taipei-based tech consultancy TrendForce, holds that foldables are "still in the stages of market-response observation and product-design adjustment." They are unlikely to be a shot in the arm for the industry, as the consultancy predicts foldables' penetration in the smartphone market to be 0.1% this year and about 1% by 2021. This could potentially be higher if "more panel providers join the game and panel costs see significant improvements."

Smartphone makers and app developers are keen to capitalize on 5G technology. For many of the telecom operators that provide the backbone for the next-generation mobile technology, 5G requires considerable investment -- but the payoff is less clear. Even though both SK Telecom and KT increased their net profit in 2018 by 17.9% and 27.3% respectively, their earnings before interest, tax, depreciation and amortization, or EBITDA, decreased by 6% and 5%. The average revenue per user, or ARPU, slid by 10.2% and 7.2%, outpacing subscriber growth which only gained by 0.8% and 5.5%, respectively. For SK Telecom, chip making unit SK Hynix provided most of the net profit of 3.1 trillion won.

"We expect [SK Telecom]'s profitability to remain subdued over the next one to two years mainly due to intense competition with planned 5G rollouts, wireless tariff discounts, and continued losses from the company's e-commerce business," said Park Junhong, credit analyst at S&P Global Ratings, in a March 6 note downgrading the company's ratings outlook to negative. That means the telecom carrier is now in the brink of losing its 'A-' ratings.

He expects the 5G launch to push up SK Telecom's capital expenditure to as high as 4.3 trillion won for this year and the next, from 3.3 trillion won in 2018.

This is not only about the Korean telecom groups. Janice Chong, director of Asia-Pacific corporate ratings at Fitch Ratings, said the whole sector is "running to stay still." Stiff competition is driving down prices for data, eroding their ability to fully capitalize on the rapid growth of mobile broadband consumption, while continuous capital investment is weakening their free cash flow positions.

Their attempts to become content providers themselves have "so far experienced limited success in generating sufficient return," Chong said. SK Telecom's near-term business is expected to be "subdued," according to one analyst.   © Reuters

Such pressures have already pushed Malaysia's biggest wireless carrier, Axiata Group to downsize its pan-regional ambitions. On Feb. 15, it announced it would sell its 28.7% stake in Singaporean telecom operator M1 to local conglomerate Keppel Corp. and Singapore Press Holdings for 1.65 billion ringgit ($403 million).

This follows its exit from its money-losing joint venture Idea Cellular, now renamed Vodafone Idea, in India, after the Aditya Birla Group-backed company merged its operations with Vodafone India amid cut-rate competition initiated by Jio, an extremely low-priced service provided by Reliance Industries' telecom subsidiary. Axiata in 2018 recorded a net loss of over 5 billion ringgit, as it wrote off legacy technology worth 1.82 billion ringgit, primarily in its Indonesian unit XL Axiata and Malaysian arm Celcom.

"Only a handful of 5G trials are taking place within the [Asia-Pacific] region. 5G investments are likely to be selective," said Chong of Fitch. Despite the hype, she believes that "this underscores the lack of a solid business case for 5G, limited device availability and the need for telcos to maintain balance-sheet strength."