TOKYO/HONG KONG -- For many single men in China, buying an apartment is a prerequisite for marriage. Yan Zhong, a 34-year-old resident of the northern city of Jinan, has hopes to do both. But lately, he has started to have second thoughts -- at least about buying the apartment.

"I'm considering holding back on my house purchasing plans for a while," he said.

Yan still intends to marry someday, but he is growing concerned about China's housing market. Even in a so-called second-tier city like Jinan, a 100-sq.-meter apartment would cost him about 2 million yuan ($297,000). Yan, who makes roughly 6,000 yuan a month working for a local environmental nonprofit organization, is only able to afford half of that, despite years of saving and generous support from his parents.

"Much of my salary will have to be spent on the mortgage, forcing me to lower my quality of life," he said. "If I find a girlfriend who does not mind renting, I would not be interested in buying a flat at all."

China's once-sizzling property market is showing signs of a slump, adding to a growing list of warning signs about the Chinese economy. Measures of consumer spending and confidence are sagging as businesses continue to absorb the impact of the U.S. trade war. Adding to the downbeat mood, China's economic growth in 2018 was the slowest since 1990.

A massive building boom across China, including in tier-two cities like Jinan, has left as many as 65 million empty apartments across the country, according to estimates by Gan Li, a professor at Southwestern University of Finance and Economics in Chengdu.

Sales volumes in 24 cities tracked by China Real Estate Index System fell by 44% in the first week of 2019 compared with a year earlier, though the four largest cities -- Shanghai, Shenzhen, Guangzhou and Beijing -- still saw a 12% increase.

"We do see some challenges ahead" for the property sector, Kaven Tsang, senior credit officer at Moody's in Hong Kong, told the Nikkei Asian Review. While foreseeing overall selling prices to be "relatively stable," he predicts nationwide contract-based sales in 2019 to fall by 5% compared to levels last year. The slowing real estate sector is a potential problem for China's policymakers. For years, real estate has played a pivotal role in creating jobs, boosting investment and generating cash for local governments. Roughly 25% of China's gross domestic product has been created from property-related industries, according to CLSA. And housing is a crucial means of asset formation in China, where ordinary citizens face restrictions to overseas investment and have few domestic options besides local stock markets, which lost 25% of their value last year.

The property slump has also triggered several episodes of social unrest, which Beijing seeks to avoid at all costs. In October, Shanghai homebuyers came out in droves to protest a developer's decision to cut prices in an apartment complex. The angry residents screamed slogans denouncing the developer and carried placards saying: "Give us our hard-earned blood-and-sweat money back!"

Chinese authorities know from experience that civil disputes such as this could fuel wider-scale protests against the country's authoritarian rule. This may be of particular concern this year as the country marks the 70th anniversary of the People's Republic -- viewed as the founding of modern China -- and the 30th anniversary of the Tiananmen Square crackdown in 1989. 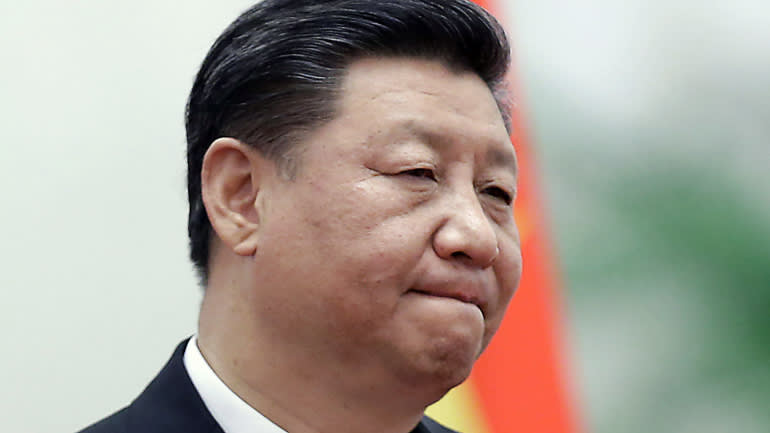 President Xi Jinping's administration has not yet directly addressed signs of trouble in the property market.   © Reuters

Even while the Chinese government has stopped short of officially speaking out on the risks facing the property industry, a top economist from a state-controlled university recently sounded the alarm. Xiang Songzuo, a professor at the prestigious Renmin University in Beijing, warned in a speech in Shanghai on Jan. 20 that real estate is one of a few serious "gray rhinos" -- a potential risk that is obvious, but ignored -- facing the economy this year.

According to his estimates, about 80% of Chinese people's wealth is in the form of real estate, totaling over $65 trillion in value -- almost twice the size of all G-7 economies combined. A significant slowdown could, therefore, have a substantial impact on citizens' financial health.

To him, Chinese people have "played around with leverage, debts, and finance, and eventually created a mirage in a desert that will soon entirely collapse." 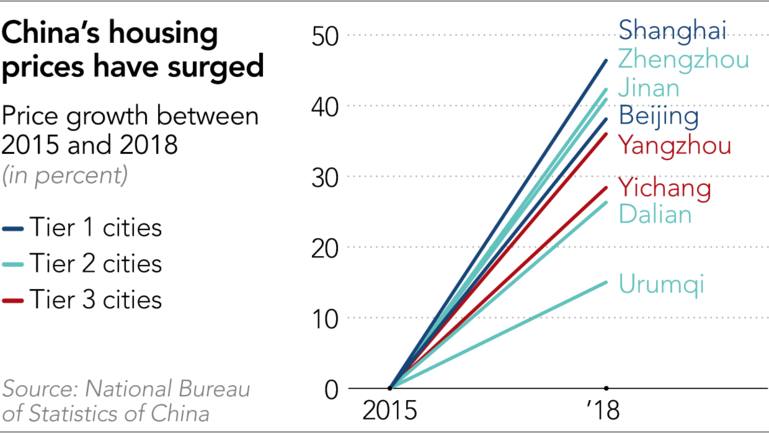 In December, Xiang challenged the government's official economic growth estimate of 6.6%, saying it was actually just 1.67% -- or possibly even negative -- in 2018. He then went on to warn of a potential crash in the property market.

"This collapse will be a perfect Minsky moment," he added, using the term for a sudden collapse in asset prices after a long period of growth, named for American economist Hyman Minsky. 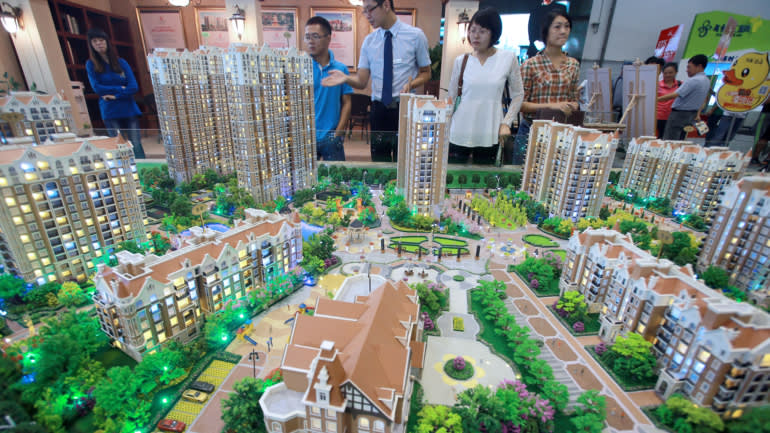 Xiang was following up on comments from a former central bank chief, Zhou Xiaochuan, who publicly warned of an asset collapse on the sidelines of the Communist Party Congress in October 2017, a major gathering held once every five years.

Funding problems for some developers

Investors are also growing jittery about the property sector. While the outlook for top developers like Country Garden and China Vanke remains stable, the bond market is flashing warning signs about debt held by many smaller Chinese property groups.

Four of them now carry a "CCC" rating from S&P Global Ratings -- deep into junk territory. Such ratings signal that companies are "vulnerable" and may not survive a slide in business conditions. The credit agency only rates 13 companies in the Asia-Pacific region this low out of the roughly 1,120 companies that it evaluates.

Hong Kong-headquartered Guorui Properties is one of them. The company was downgraded two notches to "CCC" by S&P on Feb. 4, a move reflecting "uncertainty over the company's refinancing plan for its imminent debt maturities" -- a warning that the midsized developer could default on its debts. Another developer, Yida China Holdings, was downgraded at the end of January to "CCC+," with analysts raising concerns that the company's "capital structure, with limited cash balance and weak liquidity, is unsustainable in the longer run and is vulnerable to adverse market conditions." The Shanghai-based business park operator has not paid the annual dividends it declared last March. Similarly, Moody's on Jan. 23 took action on Jiayuan International Group, dragging its rating down two notches to "Caa1" with a negative outlook. The ratings agency is concerned that a recent sharp fall in share price coupled with an unstable ownership structure could "undermine investor confidence [and] increase refinancing risks."

Tsang of Moody's told Nikkei that China's crackdown on its "shadow banking" system has made it harder for these companies to finance themselves.

Shadow banks "used to be one of the major funding sources for developers," he said, but China's recent efforts to reduce risky debt "have weakened the liquidity for small and medium-sized developers who relied on this type of funding."

While developers struggle to refinance their piles of debt, Chinese cities are facing a glut of unoccupied flats.

Prof. Gan's striking estimate that 65 million urban residences -- or 21.4% of housing -- stand unoccupied was published in a report in December. The proportion is up from 18.4% in 2011, driven by a rise of vacancies in second- and third-tier cities, where demand is relatively weaker and speculative activities are more prevalent than in Shanghai, Shenzhen, Guangzhou and Beijing.

Prof. Gan warns of potential financial risk from the rising number of vacant houses. Of the 22.9 trillion yuan ($3.4 trillion) of outstanding mortgage debt held by Chinese people as of the end of 2017, 47.1% of that is tied up in residences that now stand empty. In other words, almost half the bank loans are tied to housing assets that are neither being lived in nor churning out rental income. According to the stress test conducted by the professor, a 5% fall in housing prices would take away 7.8% of the actual asset value of occupied houses, but 12.2% for unoccupied houses. "If housing prices keep on falling, the damage to unoccupied residences accelerates even more than the occupied [ones]," Prof. Gan said in the report.

In response to the property slowdown, some local governments have been quietly removing some restrictions on home purchases, including by scrapping price caps for new units and relaxing the requirements for non-local buyers. In early January, China's central bank also moved to lower the amount of cash that banks must hold as reserves by 100 basis points, freeing up a net of 800 billion yuan, or $117 billion, for new lending.

But economists and analysts are skeptical about the effect of these easing measures. "The broad attempt to reduce risks in the financial sector has been the main reason for the slowdown," said Shaun Roache, Asia-Pacific chief economist at S&P Global Ratings. "Deleveraging is considered to be the critical battle ... policymakers are easing, but only carefully," he said in an interview.

Alan Jin, head of non-Japan Asia property research at Mizuho Securities, said the easing measures are "fairly trivial" and not likely to stimulate much new homebuying.

"The most draconian period on the [debt] policy front may be over, but this by no means indicates that developers can look forward to rosy days ahead in 2019," he said in a Jan. 10 research note. China's slowdown is not tied only to the property sector. The ongoing trade war and escalating pressure from the U.S. on wider structural issues are biting into confidence, crimping both consumer spending patterns and the willingness of manufacturers to invest. This downturn in China, S&P's Roache says, may be "different" than ones in the past.

Those who think China could experience a more difficult downward cycle point to a number of factors, including an aging population and unfavorable global environment, but high debt levels are a chief concern. It now stands around 270% to GDP, of which the corporate sector -- especially in real estate -- represents over 160%.

"The biggest dilemma to address the debt problem comes from the trade-off between debt sustainability, growth and monetary policy," said Haibin Zhu, chief China economist and head of China equity strategy at J.P. Morgan in a Feb. 4 report. At this debt level, about 70% of the new financing will be used to repay interest, meaning only 30% could be used to support new economic activities. Zhu believes this is a "key reason why credit policy transmission has been weakened in recent years."

The pause in the upward property cycle, according to Jin of Mizuho, has "dashed" the hopes of making quick profits in the housing market. As a result, "homebuyers' sentiment can only get cooler."

Zhang Zhaohui, a 30-year-old public relations specialist in Beijing, is among those whose appetite for buying a home has cooled. She had been planning to buy her first apartment sometime in the next year, but the recent downward moves in the property market have spooked her.

"It was quite scary to see that real estate prices in some cities had gone down as much as 20% last year, making me wonder if China's property market is about to collapse," she said.

Luckily, she can afford to take a "wait and see" approach. "I'm not in a rush anyway," she says.