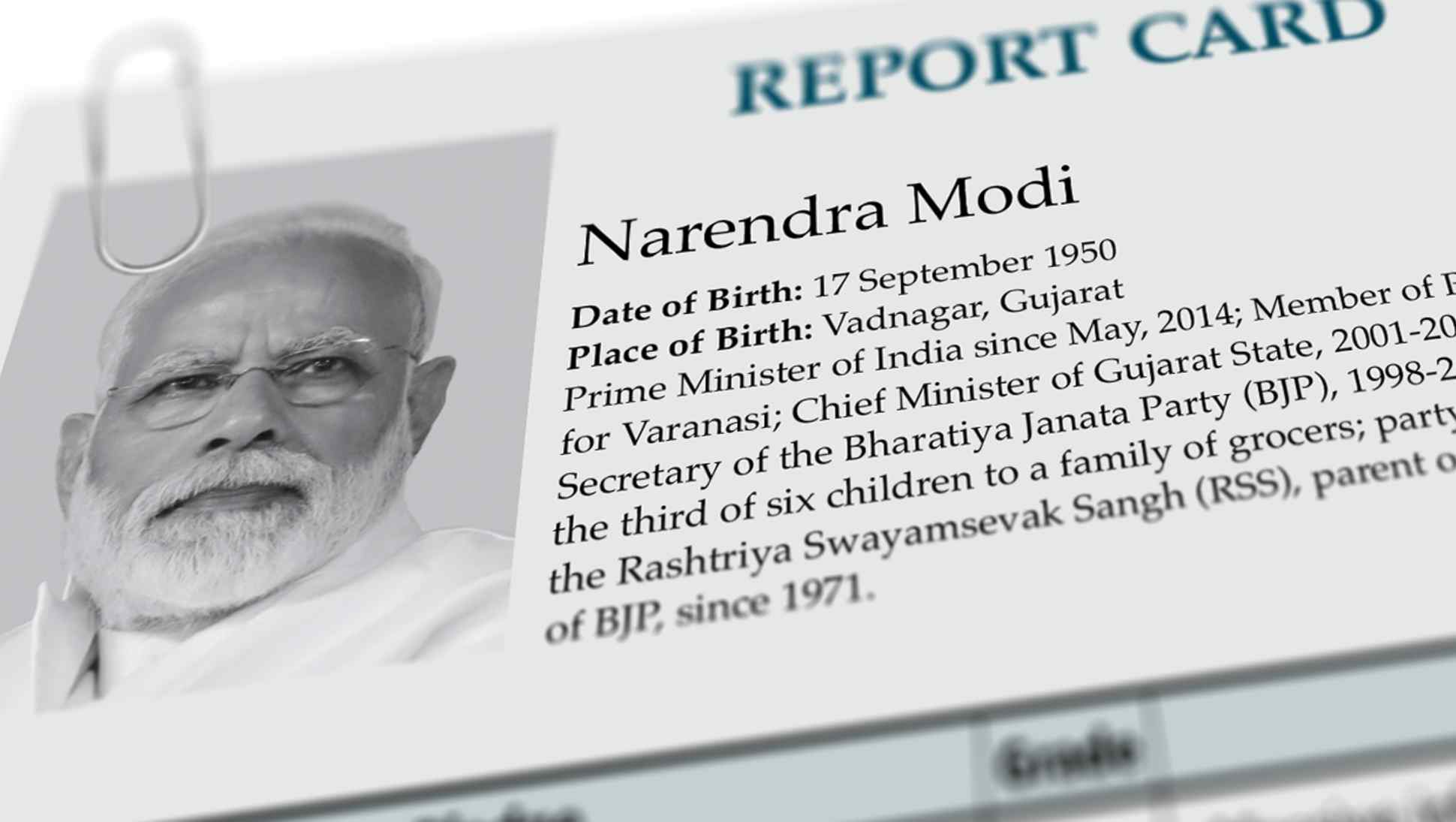 MUMBAI -- Narendra Modi's Bharatiya Janata Party made more than 100 policy pledges during the 2014 elections and in the early days after assuming power. They ranged in target from specific infrastructure plans to anti-terrorism measures, and in scale from tax reforms to a vow to "provide electrified and toilet-equipped housing for every family" -- in a country of 1.3 billion.

Here, we assess how far Modi's government has come over five years in tackling -- or failing to fulfill -- its key pledges, especially those that promised to reform longtime barriers to economic activity.

Moving up the ranks

Defying the skeptics, India has leapt 53 places over 2017 and '18 in the World Bank's annual "Doing Business" rankings, thanks in large part to improved access to electricity and credit. The jump, however, still misses Modi's ambitious target of a top 50 placement by fall 2017.

India's growth has recovered to around 7% per year, following a three-year slump. But while debt levels have improved, the country missed its fiscal deficit-to-GDP goal of 3%, extending the target year from FY2017 to FY21.

Demonetization -- Modi's decision to remove high-value bills from circulation -- failed to achieve its goal of clamping down on the shadow economy, with the central bank revealing last year that 99.3% of the banned currency is back in the banking system.

Business has responded well to the Modi government's work to simplify the business tax regime, partly through the introduction of a goods and services tax. Other big changes include wider powers for business visas, easier SWIFT banking transfers and new customs centers at ports of entry. Foreign investment is seeing uneven progress, though: FDI limitations have been loosened in some sectors, while remaining in place in some industries like retail.

One tax for all

State taxes have been absorbed into a national Goods and Services Tax. GST-registered businesses totaled roughly 12 million at the end of 2018, double the number before the tax went into effect. It was marred by a difficult rollout.

Introducing the National Company Law Tribunal in 2016 along with the Insolvency and Bankruptcy Code, the government has successfully set up a fast-track "commercial courts" system to usher through business-related disputes, including increasingly important intellectual property rights cases.

Retrospective taxation -- a problem hit by Vodafone over a 2007 deal, when a legal amendment suddenly made the company liable for 110 billion rupees in capital gains tax -- has not been corrected with new legislation under the Modi government as promised, but it has stopped being enforced in practice.

Modi's government introduced subsidies and flexible labor laws to boost garment-related businesses. A burgeoning startup scene has been encouraged by state-backed accelerator programs. But the economy needs to be more open to foreign capital and goods to develop manufacturing and other sectors.

India's complex system of landowning rights -- a high barrier to international companies acquiring property and setting up shop in India -- has seen little resolution. An effort to exempt land for public projects from approval by residents was rejected by India's parliament in 2015. Nationwide digitization of land records, intended to better facilitate ownership changes and reduce court disputes, is far from complete as it undergoes a slow state-by-state rollout.

Modi vowed to trim India's famously bulky bureaucracy. But only 3 of 52 ministries have been merged, and his cabinet still counts more than 60 ministers. An ambitious project to digitize government records and applications is only partially complete.

Fixed-term employment contracts were widely permitted by law for the first time in March 2018, allowing more flexibility for India's manufacturers. But scores more changes are still in the pipeline, including changes to one law that requires government permission for any manufacturer with over 100 staff to fire an employee. India has 38 national-level employment laws.

Modi promised to double the number of local courts and judges to deal with a backlog of 30 million cases clogging India's legal system, but he has far to go. Judges at the lower court level increased by 15% to 17,509 over the five years to Dec. 2018, with high court judges increasing from 640 to 695.

Vows to make secondary schooling universal have been hampered by low teacher numbers, which are increasing at only 2.6% annually. Enrollment in senior grades is as low as 52% in some areas. Behind that lies a lagging rate of public spending on education, which failed to hit a targeted 6% of GDP, reaching as high as 4.4% in FY2017.

The government has backtracked on promised price controls for farming produce, but has successfully begun centralizing the agriculture market. But India's socialist market past will have to be left further behind in order to properly kick-start productivity.

In 2015, the Reserve Bank of India enacted a "nonperforming asset recognition" provision that enabled banks to accelerate write-offs of bad loans. Credit generation across the banking sector is set to improve. But excessive state ownership in the banking sector remains unreformed.

Although Modi's government planned to introduce better accountability and governance into India's banking system, including state-owned banks, there has been no sign of a policy plan.

Modi has not managed to deliver his promise to build 30 km worth of highways per day -- but his team has overtaken the building rate of the previous government, hitting a pace of 25 km per day in the fiscal year ending March 2019. The previous Singh government built 16 km of highway daily.

Modi's transport officials envision a $14-billion high-speed rail network, the "Diamond Quadrilateral," connecting Delhi, Mumbai, Kolkata and Chennai by 2023. Construction was scheduled to begin in 2017, but has already hit issues acquiring land on its initial section between Ahmedabad and Mumbai.

Modi announced his government would build 100 "smart cities" with a budget of $29 billion. The locations have been identified and around a quarter of the budget has been spent, but no project has been completed yet.