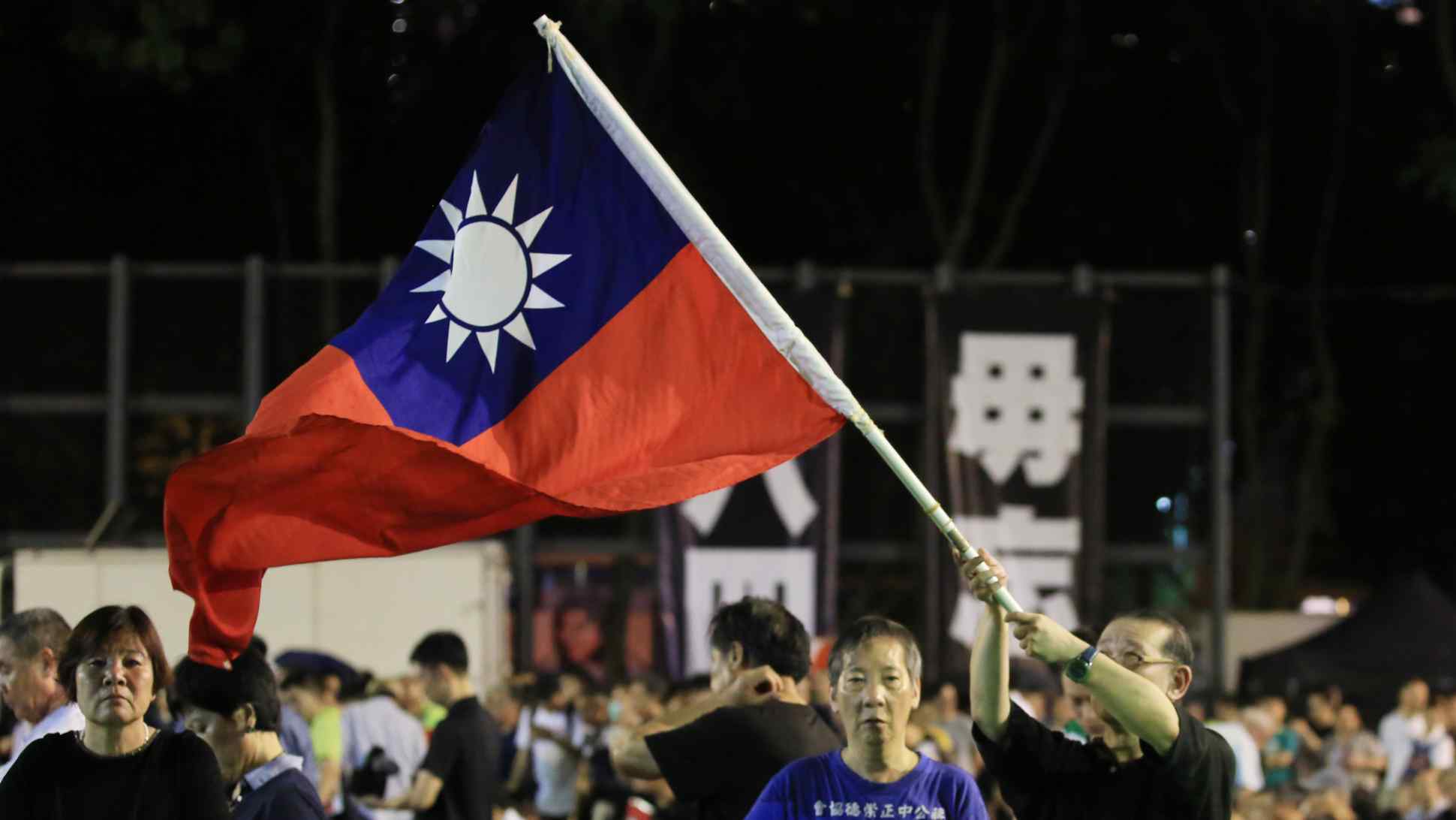 Hong Kong protesters wave the Taiwanese flag at a protest on July 4. (Photo by Kosaku Mimura)
The Big Story

TAIPEI -- The Hong Kong government's attempt to push an amendment to its extradition law through the legislature has further alienated its people from China and moved them closer to Taiwan.

It has also boosted Taiwan's China-skeptic president and her Democratic Progressive Party in the run-up to a general election in January.

A march in Hong Kong on June 16, which organizers claim drew more than 2 million, was not the only demonstration that day: A much smaller protest in Taipei, which the coordinators say attracted 10,000, was the largest-ever public display of support for Hong Kong in Taiwan, which has emerged as the territory's biggest champion.

The growing solidarity between Hong Kong and Taiwan is likely to be disconcerting for President Xi Jinping, China's strongest leader since Mao Zedong. Taiwanese President Tsai Ing-wen and other officials have voiced their backing for Hong Kong on social media, with messages of sympathy and solidarity.

The recent solidarity between Taiwan and Hong Kong took root five years ago, when Taiwan's Sunflower Movement -- which derailed a trade agreement with China -- in part inspired Hong Kong's Umbrella Movement, which failed in its goal of making the territory more democratic.

"Ever since the Umbrella and Sunflower movements of 2014, Beijing has been alert to the potential for cooperation between pro-independence forces in Hong Kong and Taiwan," said Bonnie Glaser, director of the China Power Project at the Center for Strategic and International Studies, a Washington-based think tank. "China is likely alarmed by recent developments and parallels that are being drawn between them."

Taiwan and Hong Kong's relationship has been generally economic, with the two separated by geography and history. But that has changed as a result of heavy-handed tactics by China's Communist government, which has sovereignty over Hong Kong but has promised it a high degree of autonomy, and which claims Taiwan as part of its own territory.

When Hong Kong democracy activist Joshua Wong Chi-fung spoke to reporters on June 17 after his release from prison for an Umbrella-era infraction, he thanked the Taiwanese people for their support, and warned of Beijing's threat to their free society. "Today Hong Kong, tomorrow Taiwan," Wong said, repeating a phrase that has become increasingly common in Taiwan. "Thank you, Taiwan," he said. "We will fight together."

That same day, Taiwan's Legislative Yuan passed a resolution in support of Hong Kong's demonstrators, condemning the use of force at a protest on June 12 and urging Taipei to help politically persecuted Hong Kong people.

Meanwhile, Hong Kong people have a clear message for Taiwan: Don't trust Beijing. At one march some protesters carried signs warning Taiwanese not to vote the China-friendly Kuomintang into power in January, claiming it would spell the end of Taiwan's sovereignty. Until two weeks ago, there was a good chance the Kuomintang could retake the presidency and control of the legislature, but Hong Kong's troubles have changed the political conversation in favor of Tsai and the DPP, who say that Taiwan is a separate country from China. Focus has switched from the economy to maintaining sovereignty.

As a result, candidates to become the Kuomintang presidential nominee have scrambled to denounce the "one country, two systems" framework that China uses to rule Hong Kong and that Xi has also proposed for Taiwan. Tech billionaire Terry Gou called the arrangement "a failure," while the mayor of Kaohsiung, Han Kuo-yu, said that if he were elected, Taiwan would be subjected to it "over my dead body."

How close Taiwan's ties to China should be is the subject of heated debate among Taiwanese, but for the vast majority, talk of unification is a non-starter. Wang Ting-yu, chairman of the Legislative Yuan's foreign affairs and national defense committee, said that what's happening in Hong Kong has unified political discussion while silencing pro-China sentiment.

"We don't want to be part of China," Wang said. "Only two countries can have two systems."