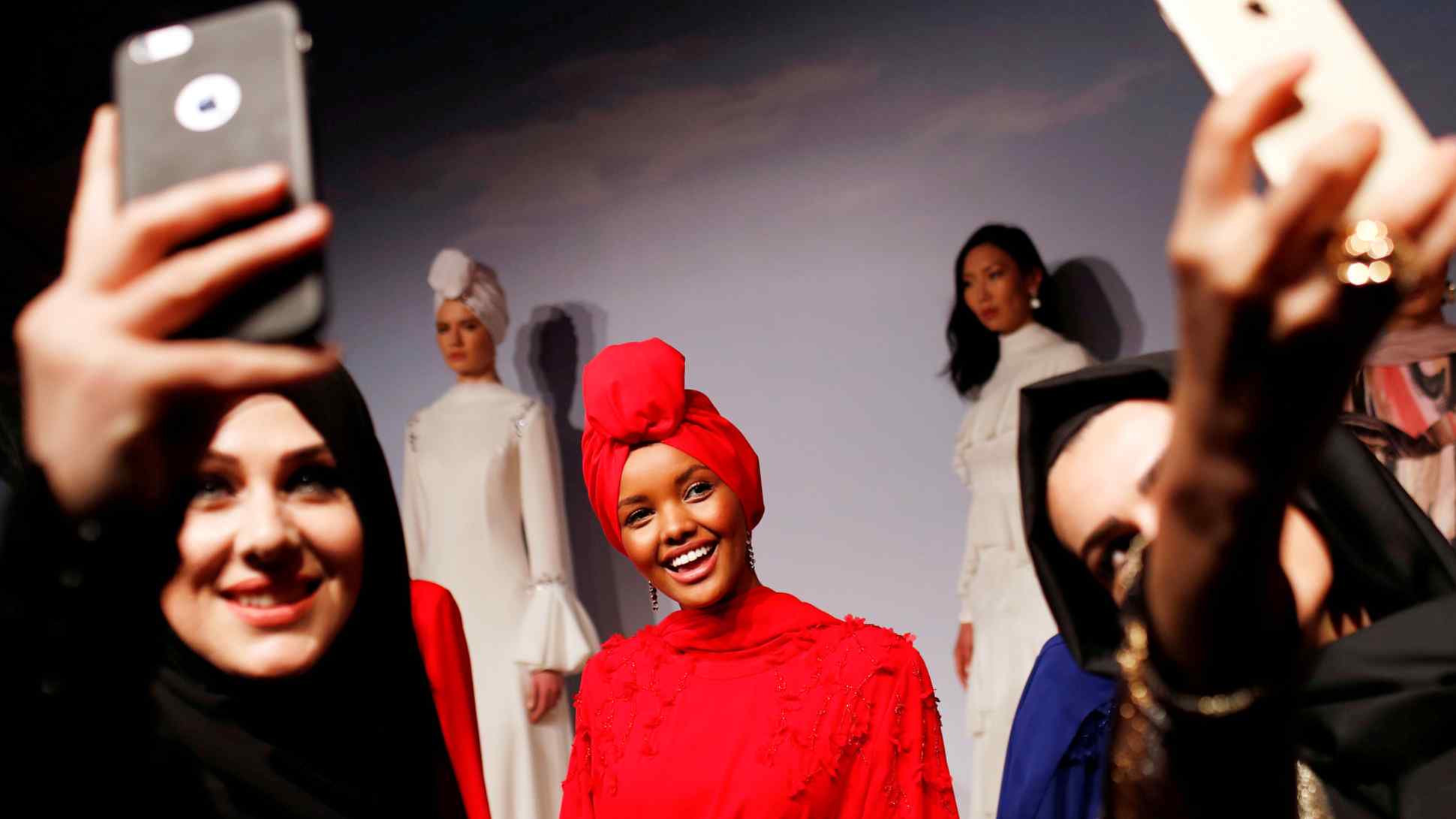 Fans crowd Halima Aden, who posed in a high-coverage "burkini" swimsuit for magazine Sports Illustrated in May.   © Reuters
The Big Story

JAKARTA/PALO ALTO, U.S. -- Fashela Jailanee clearly recalls how the hijab in 1990s Singapore was inextricably linked to the color black, the absence of makeup, and fashion deprivation. Fast forward 20 years and nothing could be further from the truth.

Today, many young Muslim women who wear the veil are stylish and glamorous, often twisting the headscarf into a turban style instead of pinning it under the chin in order to show off their dangling earrings, and adding high heels, jeans and luxury designer bags. Bold makeup is also part of the trend, including fake eyelashes and bright red lipstick.

"When I was growing up, the hijab was supposed to be 'non-fashion.' Now it's completely different," says Jailanee, 45, a researcher at Singapore's Nanyang Technological University and co-author of a paper on so-called hijabistas, a word combining hijab and fashionista to describe hip young Muslim women who wear Islamic dress but in a stylish way.

Jailanee attributes this change to social media, which she says is playing a key role in the growing demand for modest fashion, turning Muslim wear, seen by many as mandatory for Muslim women who have reached puberty, into covetable goods.

Muslims today are exposed to "social media, the internet, access to a whole world of commercialization," says Jailanee.

Indonesian designer Dian Pelangi is one such influencer. With nearly five million Instagram followers, she has been credited with popularizing so-called Muslim streetwear in Indonesia, helping young Indonesian Muslims to remain stylish while covering up.

The London-based fashion news website Business of Fashion named her among the 500 most influential figures in the industry in 2015-16, calling her a "tour de force in the global Muslim fashion scene and beyond."

Jailanee also sees the emergence of the hijabista as a response to Islamophobia in the West, especially in the wake of the Sept. 11, 2001, attacks on the World Trade Center in New York by Islamic militant group al-Qaida.

"Because of the backlash from 9/11, this group of Muslim men and women decided to completely turn the stereotype around."

This untraditional approach to modest dress is especially evident in Southeast Asian nations such as Indonesia, Malaysia and Singapore, whose Muslim communities are more moderate and more open to a freer interpretation of Islam than their deeply conservative Middle Eastern counterparts.

Seek Refuge, a California-based modest-streetwear e-tailer that targets young Muslim women in the U.S., is one clothing line taking a more liberal approach. Its founder, 26-year-old Shazia Ijaz, says "modest" doesn't have to mean the hijab. Few of the models on her website, which features loose jackets, sweaters and jeans, wear the headscarf, and part of her stated mission is to empower Muslim women.

"I really wasn't seeing anything in the modest-fashion industry that spoke to younger Muslim women," Ijaz told the Nikkei Asian Review. "So I started Seek Refuge as a brand that would allow Muslim women to practice all levels of modesty in a cool and a fashion-forward way."

The modest-fashion industry is not without controversy, drawing a mixed response from Muslim communities. Somali-American model Halima Aden won praise from some in May as the first woman in a hijab to appear on the cover of Sports Illustrated magazine, wearing a "burkini," or head-to-toe swimwear. But she was denounced by others, saying she should not have appeared in a magazine known for objectifying women. Conservatives took issue with her pose and the burkini itself, saying neither were appropriate for a Muslim woman.

Franka Soeria, a modest-fashion consultant, is worried that the glam factor is getting out of hand, and wants to return the industry to Muslim values, which include modesty and helping others. She has started by encouraging designers to employ refugees and people with disabilities in the production of modest wear in Indonesia and elsewhere.

"Modest fashion has to have something to give back," she says. "It should not be an ugly competition to become the most glamorous. It has to be a competition to do good things."