ASEAN adjusting to a less-participatory US

TOKYO -- The 23rd International Conference on the Future of Asia, organized by Nikkei Inc., held here earlier this week, focused on Asia's new landscape, one in which the U.S.'s presence is weakening.

An unusually strong sense of tension prevailed among Asia's political and economic leaders and other participants during the two-day conference. Their statements and attitudes at the first Future of Asia since U.S. President Donald Trump took office revealed their struggles to adapt now that the U.S.'s generous involvement is fading away. As for the Trans-Pacific Partnership trade agreement, Kalla, said during an interview with The Nikkei that "without the U.S., we feel the benefits on the trade front for Indonesia aren't that big, and we have lost interest."

When President Joko Widodo of Indonesia, whose population of 200 million is the largest among countries in Southeast Asia's regional trade bloc, visited the U.S. in October 2015, he told then U.S. President Barack Obama that Jakarta would participate in the TPP. But, Kalla told The Nikkei, "the allure of the TPP for Indonesia was the fact that the U.S. was part of the deal." 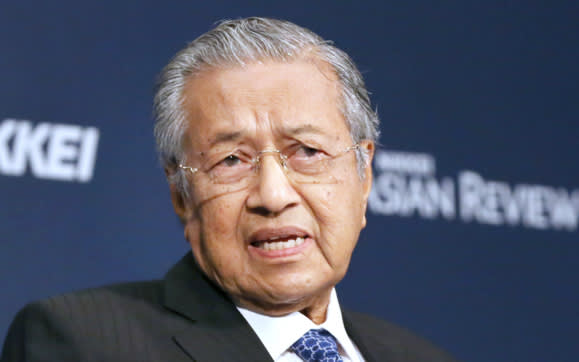 Former Malaysian Prime Minister Mahathir Mohamad, who has maintained a critical stance on the U.S., said in a colder tone at the podium, "Most free trade organizations in which America takes part, the tendency is for America to dictate and force its own views on the group. Now of course, America will not be able to do [this] because [it] may be excluded from trade agreements."

Mahathir even appeared to have welcomed the weakened influence of the U.S. on Asia. "Without America," he said, smiling, "countries can think of new ways to cooperate with each other in a more equitable way."

The Association of Southeast Asian Nations, is facing its biggest test since it came together as a political bloc 50 years ago. ASEAN cleared a major milestone in its regional economic integration agenda by establishing the ASEAN Economic Community, or AEC, at the end of 2015. The 10 member countries have a total of 620 million inhabitants, a larger population than the European Union. Their combined gross domestic product is $2.5 trillion.

But the 10 have failed to band together in dealing with maritime security as China's military advances in the South China Sea. As far as the TPP goes, only four were involved in the TPP.

A pro forma agreement of the proposed Regional Comprehensive Economic Partnership deal -- which ASEAN Secretary-General Le Luong Minh says has ASEAN "sitting at the driver's seat" -- is expected at a summit in November to celebrate the 50th anniversary. But the expected accord would only ensure a limited degree of freedom.

ASEAN members are also vague on the so-called TPP 11, which Japan has been pushing since the U.S. dumped the original TPP in January.

The relationship between ASEAN and the U.S. may be like that between the moon and sun -- ASEAN really shines when it reflects the light of the U.S. ASEAN, established half a century ago as a wall against communism, has grown to face off against big nations in negotiations. Undeniably, however, the grouping has lost its original unifying mandate.

Vietnam had been counting on U.S. participation to make joining the TPP worthwhile. Then Trump took office and officially withdrew the U.S. from the agreement. Even then, however, Vietnamese Prime Minister Nguyen Xuan Phuc welcomed the TPP 11 initiative, saying that the TPP is important to the economic integration of the Asia-Pacific region.

During an interview with the Nikkei Asian Review on the sidelines of the conference, however, Phuc appeared to backpedal a bit. He said his trade minister will "discuss with his TPP peers the best options for mutual benefit."

Phuc went on to say that the minister will then report back to him, suggesting the talks will influence Vietnam's decision on whether to push for renegotiation. China's "belt and road" initiative replaced the U.S. and the TPP as the conference's big buzzwords. Almost all of the conference's speakers referred to the massive Chinese infrastructure plan with forward-looking words. Deputy Prime Minister Somkid Jatusripitak of Thailand referred to it as something "that will eventually become a new platform supporting global free trade."

The view expressed by the Thai military government, which is narrowing its political distance with China, is not wrong. If China promotes the development of ports, roads, railways and electric power plants between itself and Europe, it will reap huge trade surpluses and ample foreign exchange reserves. ASEAN, too, will benefit as goods and services travel through it in both directions.

The initiative will also be a boon to a China that is grappling with excess industrial capacity. Made-in-China steel, cement and other materials as well as electrical equipment, machines and still more products will be able to meet more of the world's demand.

Another benefit: The initiative will contribute to the internationalization of the yuan, making it more of a settlements currency.

There's more: If materials and people are transferred in connection with construction work under the initiative, China will be able to take the lead in setting rules for smooth trade and investment, such as the standardization of tariffs, customs clearance procedures, technological standards and legal systems.

As Somkid said, "No one can deny that this is a grand and innovative concept that encourages countries to collaborate."

Think of it: The prime candidate to replace the U.S. in harmonizing trade and other international conventions is a country that does not necessarily respect freedom or democracy. The two-day conference served as an opportunity for Japan to recognize a cold reality. At a banquet on Monday, Japanese Prime Minister Shinzo Abe did an about-face regarding the belt and road undertaking. He even paid it a huge compliment: "The 'One Belt, One Road' initiative," he said, "holds the potential to connect East and West as well as the diverse regions found in between."

Tokyo then announced that it is negotiating with Beijing for reciprocal visits by the two countries' leaders.

Meanwhile, calls are increasing in Japan for the country to participate in the Asian Infrastructure Investment Bank, established by China.

Future historians will look at this year's Future of Asia conference as a historic milestone in relations between Japan and China. Goh Chok Tong -- the second prime minister of Singapore, long a champion of free trade along with Japan and the U.S. -- compared Trump's America to China and prodded slow-moving ASEAN leaders to get behind China. "Is the belt and road another hub-and-spokes strategy?" he asked. "Chinese leaders have made it clear that is not their intention."

Goh quoted Chinese President Xi Jinping in answering his own question and refrained from making his own stance clear. Goh's approach suggests that he has placed expectations on China but still harbors concerns that the nation may rein over Asia.

National leaders who participated in the conference must have come to understand that ASEAN can play a role and prove its raison d'etre if it skillfully deals with China -- winning economic cooperation from China but warning it off of its aggressive moves in the South China Sea.

Japan also has some China diplomacy ahead of it. Instead of confronting China and dreaming of winning a competition with it, Japan must ensure that China goes about developing Asia in a fair manner.