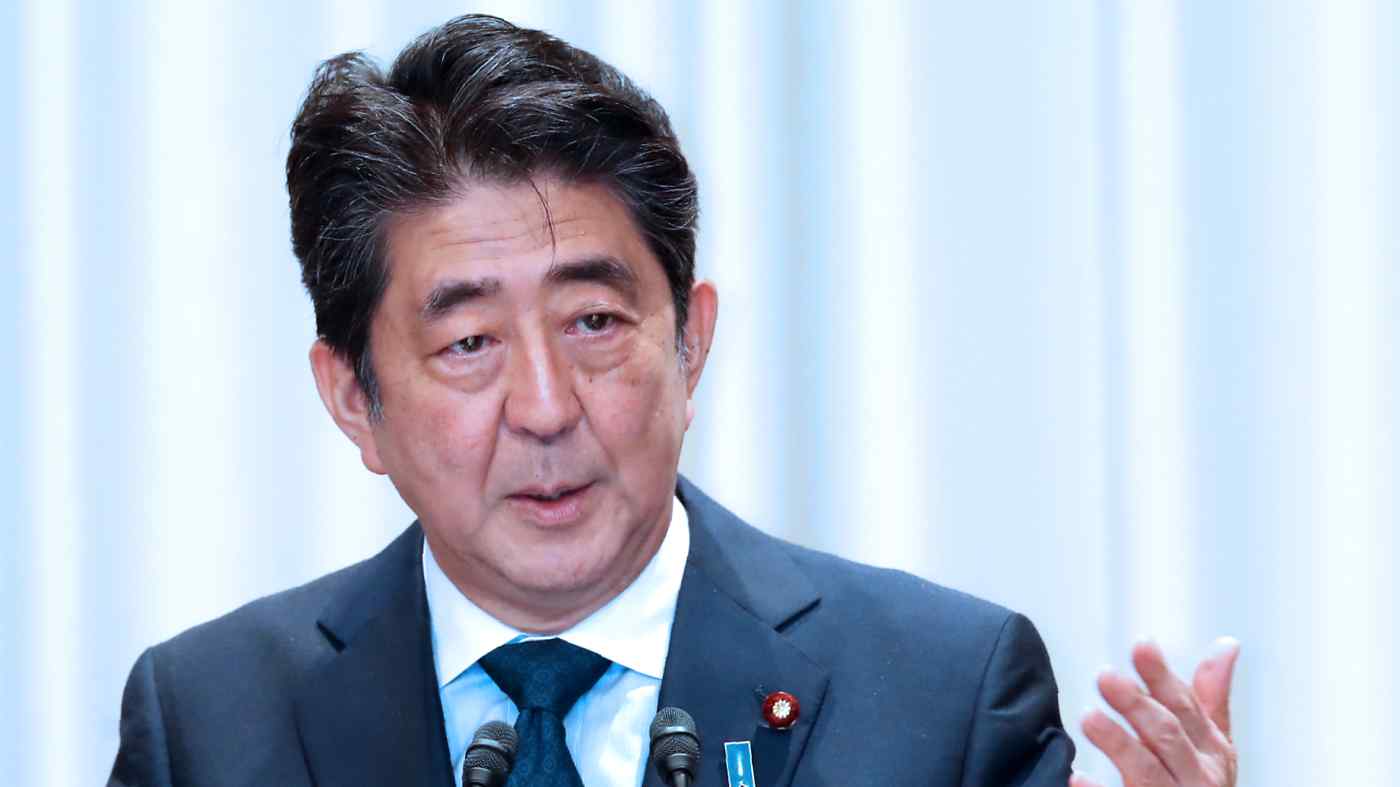 Japanese Prime Minister Shinzo Abe speaks at a dinner for the Future of Asia conference in Tokyo on Monday. He emphasized the need for a denuclearized Korean Peninsula. (Photo by Maho Obata)
MASAYUKI YUDA, Nikkei staff writerJune 11, 2018 21:07 JST | Japan
CopyCopied

Speaking at a dinner at the 24th International Conference on the Future of Asia, which is hosted by Nikkei, Abe said the funds will be available over the next three years. It is part of his strategy to strengthen cooperation in the Indo-Pacific region.

In his speech, Abe also said Japan would be ready to extend economic assistance to North Korea, but insisted that Pyongyang must comprehensively solve the issues of denuclearization, missiles and abductions of Japanese citizens for that to happen.

Abe said he had received a telephone call from Donald Trump in Singapore ahead of the U.S. president's meeting on Tuesday with Kim Jong Un. "I received a detailed explanation from President Trump about what is going to take place," Abe said. "I once again requested the point of abduction be raised to the leader of North Korea."

"By taking steps down the path that fosters peace, the rule of law and freedom, it becomes possible for North Korea to make a deeply meaningful contribution, specifically of bringing about substantial peace dividends for East Asia," he said.

"It is my heartfelt wish that through tomorrow's historic summit meeting, North Korea will fully recognize the expectations of the international community and take a major step towards the correct path, heading towards the future," Abe said.

The prime minister added that, with or without North Korea, Japan is committed to making investments for the future of the region. "With a view to the long term, investing in the future is a matter of making investments in three key areas: first, education; second, knowledge exchanges; and third, improvements to connectivity and infrastructure," Abe said.

The dinner was also attended by the new Malaysian Prime Minister Mahathir Mohamad. Abe addressed Mahathir at the beginning of his speech, saying: "I express my heartfelt respect for your determination to lead your country once again." 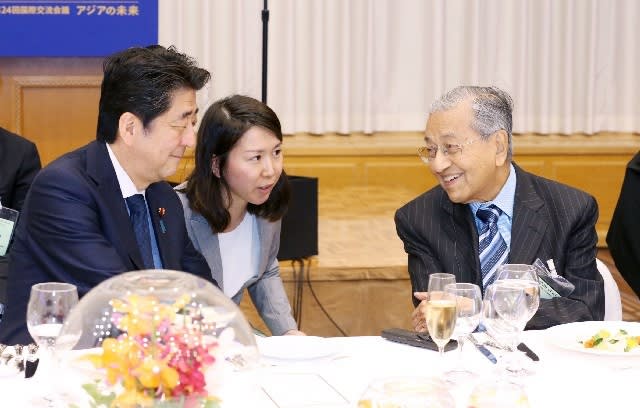 In response to infrastructure needs extending over the Indian and Pacific oceans, Abe announced the launch of a new financial agenda within the government-owned Japan Bank for International Cooperation.

"This is a framework that will make it possible to provide funds of approximately $50 billion in total from Japan's public and private sectors over the next three years," he said. "We hope this will serve to assist in the building of high-quality infrastructure in the Indo-Pacific region."

Abe defined "high-quality infrastructure" as investments that increase employment, expand educational opportunities for workers and attract even more foreign domestic investment -- and as a result make Japan's loans easy to pay back. His characterization of the infrastructure probably came in order to refrain from discouraging borrowers in using the program.

He also addressed Japan's efforts to give aid for education and for knowledge exchanges.

"The Japan International Cooperation Agency and various universities around Japan will join hands to launch a new program," Abe said. "Beginning this year, young people with the desire and ability to shoulder the future of their nations there in their home countries will be selected and invited to Japan."

"About five years from now, we aim to have at any given time approximately 2,000 young people who will shoulder the futures of developing countries studying in Japan," he added.

The scholars will come from around Asia, Africa, Oceania, Latin America and the Caribbean and the Middle East, Abe said.