Thailand welcomes Chinese investment but is cautious on financing

Industry minister warns of falling into a debt trap 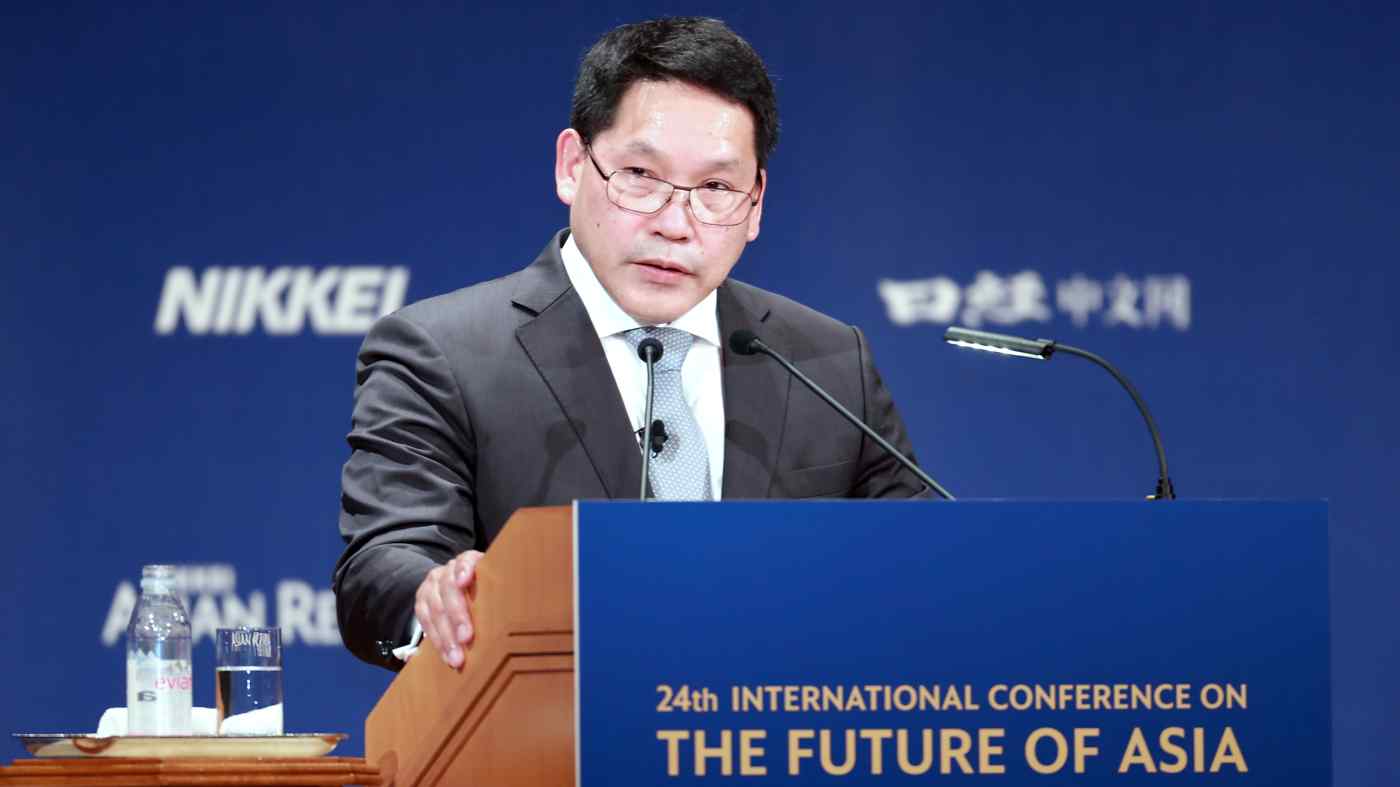 TOKYO -- Thailand is open to Chinese private investment in its much-touted special economic zone, but it will be cautious on receiving funds from Beijing for large infrastructure projects, Thailand's industry minister said on Tuesday.

"We are open to discuss about Chinese private investment ... in various sectors," Uttama Savanayana told the Nikkei Asian Review in an interview following his speech at the 24th International Conference on the Future of Asia in Tokyo, which was organized by Nikkei.

"China, like Japan, is known for leading technologies ... there is a lot we can learn," he said, touching on the possibility of involvement by Chinese companies in building "smart cities" in the Eastern Economic Corridor, a special economic zone that spans more than 13,000 square-kilometers along the coast of the Gulf of Thailand.

The EEC is aimed at developing high-tech industries such as biochemicals, petrochemicals, robotics, aviation and electric vehicles. It will connect Thailand's major airports and seaports with high-speed trains that will eventually link it to southern China and to the so-called CLMV region, which comprises Cambodia, Laos, Myanmar and Vietnam.

But Thailand will be cautious when it comes to financing, so as not to fall into a debt trap like Pakistan. "We are very careful not only in the respect to China but for any kind of major investment that would take place in Thailand that will involve huge financing," Uttama said.

In 2016, Thailand decided to scrap loan arrangements from China on a planned railway project that will eventually connect China and Thailand via Laos, deciding to finance it on its own. The railway project in the EEC will adopt a public-private partnership scheme so that the government will not "create national burdens."

Japan has been by far the largest foreign investor in Thailand over the decades, developing the country into a major automotive and electronics manufacturing hub in Southeast Asia. But in line with China's massive Belt and Road Initiative, investment from the country is increasingly growing in Thailand.

Uttama also said that the EEC could be a "starting point" for planned business cooperation between Japan and China in third countries, following a bilateral agreement between Tokyo and Beijing. In late May, representatives of the three countries came together for a joint business conference, and talks have already started between public and private sectors on possible collaboration.

"I will look to further facilitate those dialogues so that the third-country cooperation can materialize with EEC becoming a good example of other initiatives to follow," he said. A planned 225 billion baht ($7 billion) high-speed railway from Bangkok to the EEC, for which bidding will open soon, has "opportunities" for collaboration, he added, as both Chinese and Japanese investors have shown interest.

Speaking earlier on Tuesday at the Future of Asia forum, Uttama emphasized that the EEC project would thrive following next year's election, noting that the EEC legislation, which was passed earlier this year and implemented in May, would be a key factor to ensure the project's continuity.

Thailand has been ruled by a military junta since a coup in 2014, and the country is due to hold a general election early next year. That has raised concerns over whether its policy on the EEC will continue after a new civilian government comes to power.

"People have known about the election, but the amount of investment application in monetary terms has actually gone up and that is a reflection of continued investment in the EEC," Uttama said. Thailand received applications for investment valued at 600 billion baht last year, while applications in the first quarter of 2018 reached 300 billion baht, of which 80% was related to the EEC, he said.

The EEC is crucial to Thailand's effort of connecting it to Asia and serving as a bridge to the rest of the world.

"The EEC strives to promote connectivity between different regions of Thailand and also connectivity among countries of the regions, the CLMV, ASEAN countries, Asia, and ultimately to other regions of the world," Uttama said in his speech.

Other Asian countries have also developed national policies that recognize the importance of heightened intra- and inter-connectivity across the region and beyond, he said. Those strategies include China's Belt and Road Initiative, Japan's Free and Open Indo-Pacific Strategy, and South Korea's 9-Bridge Strategy.

Uttama said Asia should play a key role in creating a comprehensive collaboration between industry and the education sector in order to create a skilled workforce that matches demand, which is concentrated in high-tech industries.

"We should begin upstream, by aiming to become the world's education leader," he said in his speech. "We should encourage regional cooperation on education and research. Universities should focus more on cooperating instead of competing, both domestically and internationally."

"Asia's education system should be able to compete with the rest of the world," Uttama said. "In the future, Asian students will not need to further their studies in America or Europe. Instead, [the] young generation in Europe or America will want to study in Asia."