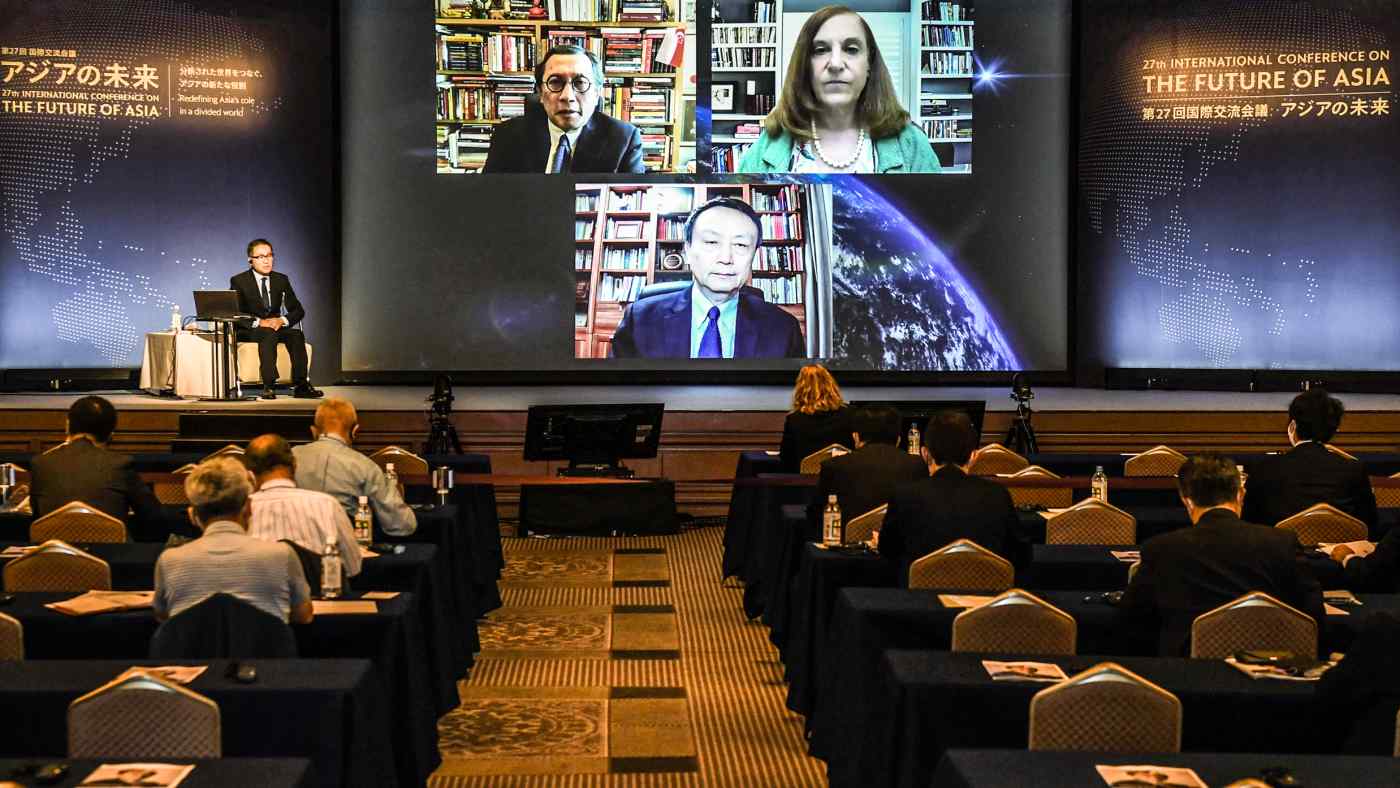 TOKYO -- The Russia-Ukraine war has exposed the ideological divisions between the U.S. and China, experts said on Friday, highlighting the difficulty of bringing the conflict to an end as well as the risks of a military confrontation over Taiwan.

Three experts on international relations debated these issues on the second day of Nikkei's annual Future of Asia conference in Tokyo on Friday.

Jia Qingguo, professor at the Peking University School of International Studies, framed the difference by arguing that the U.S. is seeking an "ideological order," while China is aiming for a "secular international order" based on national sovereignty and territorial integrity. In his view, the American model would have "no room for compromise."

"Countries should respect each other," Jia said, and "at least reach for an interest-based international order" if a values-based one is difficult to achieve.

In a rebuttal, Bonnie Glaser, director of the Asia program at the German Marshall Fund of the United States, questioned the meaning of "respect" as China understands it. "When countries have put their own interests ahead of Chinese interests, that has been interpreted by Beijing as disrespect," she said.

Bilahari Kausikan, former permanent secretary of Singapore's Ministry of Foreign Affairs, agreed that there was "a valid point" in Jia's explanation of the respective hopes of the U.S. and China. He said the U.S. and Europe would "not be well-served to define these shifts in an overly ideological way ... as a conflict between authoritarianism and democracy."

The U.S. was making that distinction even before Russia invaded Ukraine, hosting a democracy summit late last year. Since the war broke out, Washington has led the way in imposing stiff sanctions on Moscow, whereas China has refused to condemn Russia while urging a peaceful resolution.

But from the perspective of the Association of Southeast Asian Nations, Kausikan said geopolitics are "moving in the direction of the West, and China cannot be very happy about it." He based this argument on Biden's recent trip to South Korea and Japan, and the launch of the Indo-Pacific Economic Framework, which symbolized renewed U.S. interest in the region.

At the same time, Kausikan was pessimistic that there will be any resolution to U.S.-China tensions. And he expressed particular concern about the fragility of the world economy, shaken by the pandemic and war, which have resulted in supply disruptions and inflation that directly affect people's lives.

"Everybody's life is going to get much more complicated for the foreseeable future," he said.

The discussion inevitably turned to Taiwan. During his visit to Japan, Biden answered "yes" when asked if the U.S. would intervene militarily should China attack Taiwan. That raised speculation over whether Washington was changing its decades-old policy of "strategic ambiguity."

"This is a position that should be taken seriously," Glaser said. "President Biden can respond militarily if China attacks Taiwan. Even though the White House is saying that U.S. policy toward Taiwan has not changed, I think President Biden feels deeply that this is a message that is necessary in order to strengthen deterrence and to prevent war."

Jia said China does not believe people should compare Ukraine with Taiwan, since "Ukraine is a sovereign state [and] Taiwan is a province of China."

Beijing, of course, regards the self-ruled democratic island as a breakaway province.

But Jia added that people are drawing lessons from the Russia-Ukraine conflict. "Some people have learned that China should stand firm against the U.S. efforts to contain China and should take firmer positions facing provocations, such as forging military alliances against China in this part of the world," he argued. "Other Chinese have learned technical lessons: If China must fight to defend this national territorial integrity, how can China avoid the mistakes the Russians made?"

The growing divide between the U.S. and China poses a challenge for the rest of Asia, where many countries are not completely aligned with either side, Kausikan said.

"There are many different types of democracies and authoritarianism. In Asia, there is a certain ambivalence," he noted. "Countries in Asia do understand what is at stake in Ukraine, and that's why you have seen most countries give what support they can to the West. But I think in some countries, this is pretty shallow. If you insist on defining this conflict as one between authoritarianism and democracy, you are likely to make that support even more shaky and shallow."