India's IT companies face heaviest blow from US visa overhaul

PALO ALTO, U.S. -- Changing a popular American visa program to favor the most skilled or highest-paid applicants could cut off a key source of cheaper labor for Indian technology services providers in the U.S. and the businesses that rely on them.

President Donald Trump has ordered a review of the H-1B visa program, calling for tougher screening of applicants and for giving priority to higher-skilled or better-paid workers. The program is intended for foreign nationals in fields requiring specialized education. But in practice, most of the 85,000 visas issued each year go to workers in the tech sector, where labor demand dwarfs the supply of adequately trained Americans. Citizens of India fill around 70% of the slots. 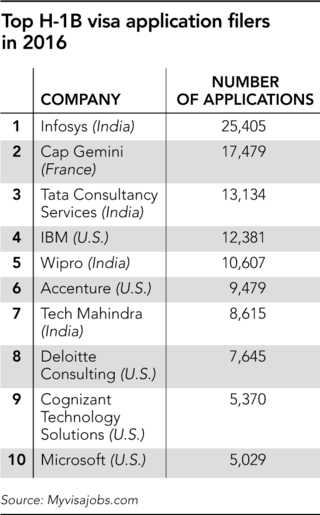 Visas on offer in the year ended September 2016 were oversubscribed by a factor of nearly eight, with employers sponsoring around 650,000 applications, according to MyVisaJobs.com. Indian technology services and staffing companies Infosys, Tata Consultancy Services and Wipro were among the top five sponsors. The top 10 included European and American consultancies Capgemini, Accenture and Deloitte Consulting, with major American tech companies IBM, Microsoft, Google and Amazon.com in the top 20.

The labor-strapped American tech sector outsources much of its information technology work to these Indian concerns, which use the H-1B program to cycle Indian engineers through posts in the U.S. Many of these visa holders are paid less than their counterparts at other companies and are not necessarily as skilled. The average annual wage for visa applicants sponsored by U.S. technology companies often tops $120,000, while the figure for Indian businesses is in the $70,000 range.

To some extent, this practice results in fewer Americans doing such work. Making screening more rigorous aims to boost American employment in the tech sector. Raising wage requirements could amount to a targeted attack on Indian companies, which would need to pay workers more to keep securing visas.

Indian companies are preparing in part by doing what Washington wants: hiring more American college graduates, who can be employed for relatively little. Dedicated training facilities in such places as India bring these workers up to speed, providing a horde of newly minted engineers to keep in-house or dispatch elsewhere, no visa required.