The impact of natural disasters, increasing economic reliance on China and the rising consumer clout of Generation Z are all backed up by data. (Source photos by Reuters)
KAZUHIRO KIDA, Nikkei staff writerDecember 16, 2020 02:02 JST | Japan
CopyCopied

TOKYO -- We are now in an age when the world's balance of power is undergoing dramatic change. An examination of data covering five themes that symbolize recent years reveals such developments as the rise of China as a superpower and the limits of democracy. As the international community faces challenges, a new generation is gaining influence. Their ability to resolve such issues as global warming through decisive action will be tested.

The global economy has become more dependent on China over the past 20 years. Ever since China joined the World Trade Organization in 2001, China replaced the U.S. as the main trading partner of many countries. Of 206 nations and regions, 152 imported more goods from China than the U.S. as of 2019. China has strengthened its clout, especially in Asia and Africa, through its Belt and Road infrastructure-building initiative.

China's growth strategy was seen as a national security threat and led to friction with the U.S. The Trump administration increased tariffs on Chinese goods and moved to shut out Chinese companies in the telecommunications and technology fields, forcing countries around the world to rebuild their supply chains. Global trade is reaching a turning point as trade volume hits a ceiling after consistent growth. Generation Z, born between 1997 and 2012, is gaining clout. There were roughly 2 billion Gen Zers around the world in 2019, making this group the largest, surpassing the digital-savvy millennials born between 1981 and 1996. Some Gen Zers have become adults and are starting new trends in consumption and culture in emerging nations in Asia and elsewhere. Gen Zers skillfully use smartphones and are comfortable expressing themselves on social media. They place importance on environmental issues and diversity, and they are starting to change society significantly. 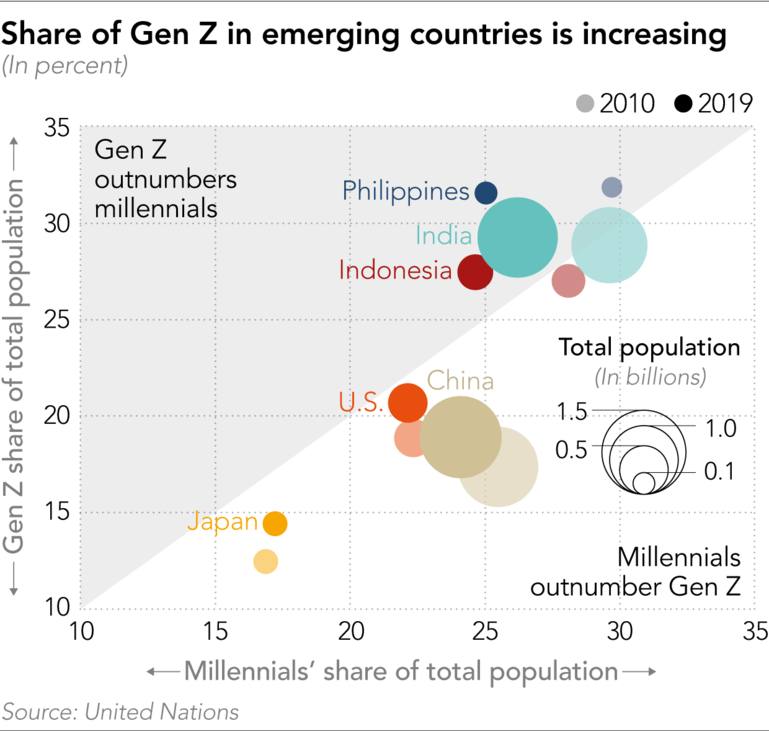 Natural disasters are occurring more frequently in line with global warming, and this is becoming a threat to humanity. Major disasters, including the flooding of rivers, have increased sixfold in the past 40 years. Abnormal weather is causing damage around the world as typhoons and hurricanes become more powerful and wildfires occur more frequently. Damage from natural disasters since 1980 has exceeded $5.2 trillion. There is a need to step up measures to deal with disasters and decarbonization. Dissatisfaction with democracy is growing in key nations. In the U.S., society's divisions have deepened under the Trump administration, leading to demonstrations by opposing forces. In Europe, Britain left the European Union and populism spread. In Japan, public distrust in politics grew under the government of Prime Minister Shinzo Abe, who became the longest continuous-serving Japanese prime minister. The exception is emerging nations in Asia, where public satisfaction increased thanks in part to political leadership. Brexit and its benefit to non-EU nations

The departure of the U.K. from the EU means that the British people, who had benefited from a single market, will pay a large price through a decline in income. Meanwhile, Brexit is seen having an unexpected impact outside the EU. Japan newly entered an economic partnership agreement with the U.K., strengthening economic ties, and there are hopes that Japan's exports will rise. Should Britain join the Trans-Pacific Partnership trade pact, more nations will likely benefit.