Survey: Asians and the young have high hopes for tech innovation

Nikkei, the FT and Nikkei Asia ask 5,000 global readers to peer into the future TOKYO -- Nikkei, the Financial Times and Nikkei Asia conducted a survey of about 5,000 readers around the world. Many Asian and younger readers said they have high hopes for technical innovation in the environmental and financial sectors, and many voiced concern over the divided international community.

The three media asked their readers 15 questions in common, such as "What will the world become in five years' time?" Readers were asked to respond on a five-point scale from "strongly agree" to "strongly disagree." The three conducted the survey on their websites in November and received more than 5,000 responses in total.

Readers in Asia and younger readers had more positive outlooks on questions regarding the environment and technology. Many readers in Japan and elsewhere in Asia agreed that some countries will become completely cashless. Of Japanese readers in their 20s, 70% shared that opinion. Younger generations were relatively optimistic that the goal of reducing greenhouse gases will be achieved.

Readers of Nikkei and the FT were slightly negative about the question "Over half of global new car sales are electric in five years' time?" A private research company also expects that will not happen until the late 2030s.

But emerging Asian countries, where cars are still not widely available, expect an early spread of electric vehicles. Readers in Asia seem to have high hopes for technical innovation for future economic growth. 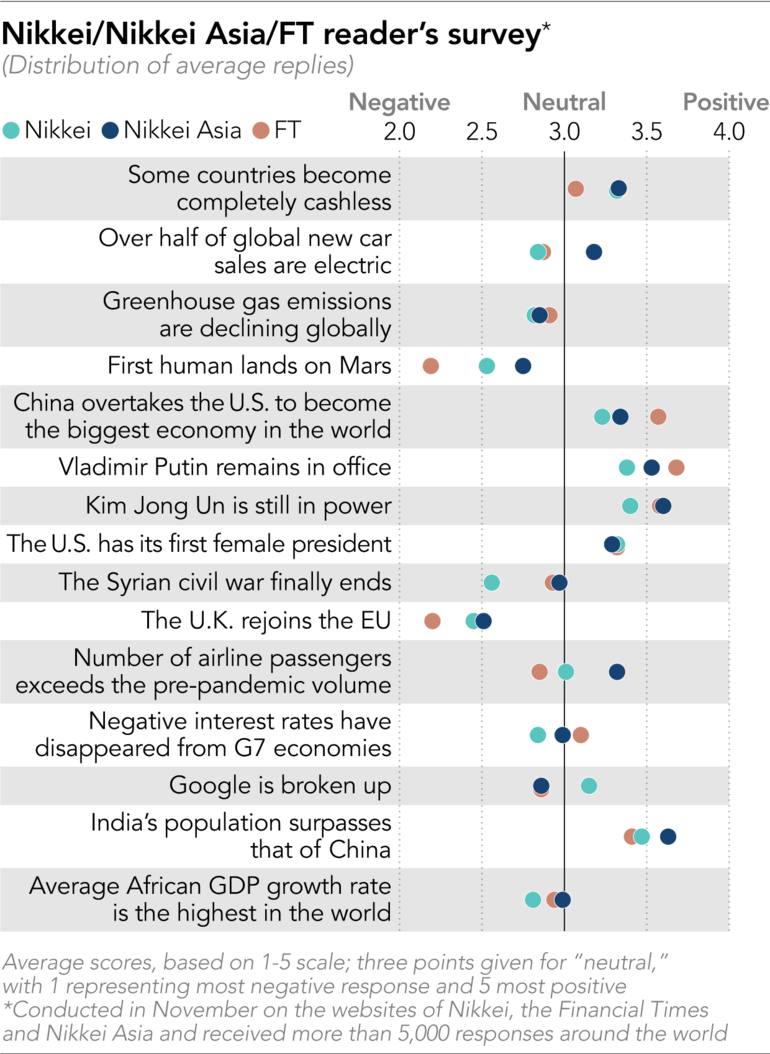 Decline of the U.S.-led international order; preparing for an unstable world

The survey results showed readers' pessimism that democracy will be powerful enough to overthrow authoritarian regimes. Readers of all three media expected that Russian President Vladimir Putin and North Korean leader Kim Jong Un will still be in power five years from now. Many expected that the Syrian civil war will continue.

Lying behind this is the decline of the U.S.-led international order. The International Monetary Fund estimates that China will overtake the U.S. as the world's largest economy within a few years after 2025, but readers expect China will do so earlier. As political turmoil grows in Europe and the U.S. and their economies are hit by the spread of COVID-19, it will not be easy for democracy to return to the center of the global order.

After COVID-19: anxiety and optimism

Readers of the three media were largely divided over the effects of COVID-19 in five years' time. Asked if the number of airline passengers will exceed the pre-pandemic level, nearly half of Nikkei readers responded that they expect so. Readers in Asia, where the spread of COVID-19 has been relatively mild, also expected so.

Meanwhile, readers of the FT, many of whom live in Europe and the U.S., which have been hit hard by resurgences of COVID-19 cases, were skeptical about the recovery of airline passenger numbers.

Many Nikkei readers expect that central banks in leading countries will continue their negative interest-rate policies. Readers in the Asian region are split, while FT readers expect negative interest-rate policies to end. While readers in Asia are optimistic that their economies will return to a growth path in the post-COVID era, readers in developed countries remain skeptical.

The United Nations estimates that India's population will overtake that of China in 2027 and that China's population will start declining in 2032 due to the effect of its one-child policy. Most readers of all three media expect that India will become the world's most populous nation in five years' time.

China has continued to increase its influence on the world. Population size is a major factor in determining a country's power and is an important parameter for future trends. Readers in Asia expect an increase in India's population more than those in other regions.

As to the question "Average African GDP growth rate is the highest in the world," readers of Nikkei and the FT were skeptical it will happen, but less so in Asia than in Japan and Europe. In Asia, which has led the world in population and economic growth, many readers seemed confident that their economies will continue to grow.