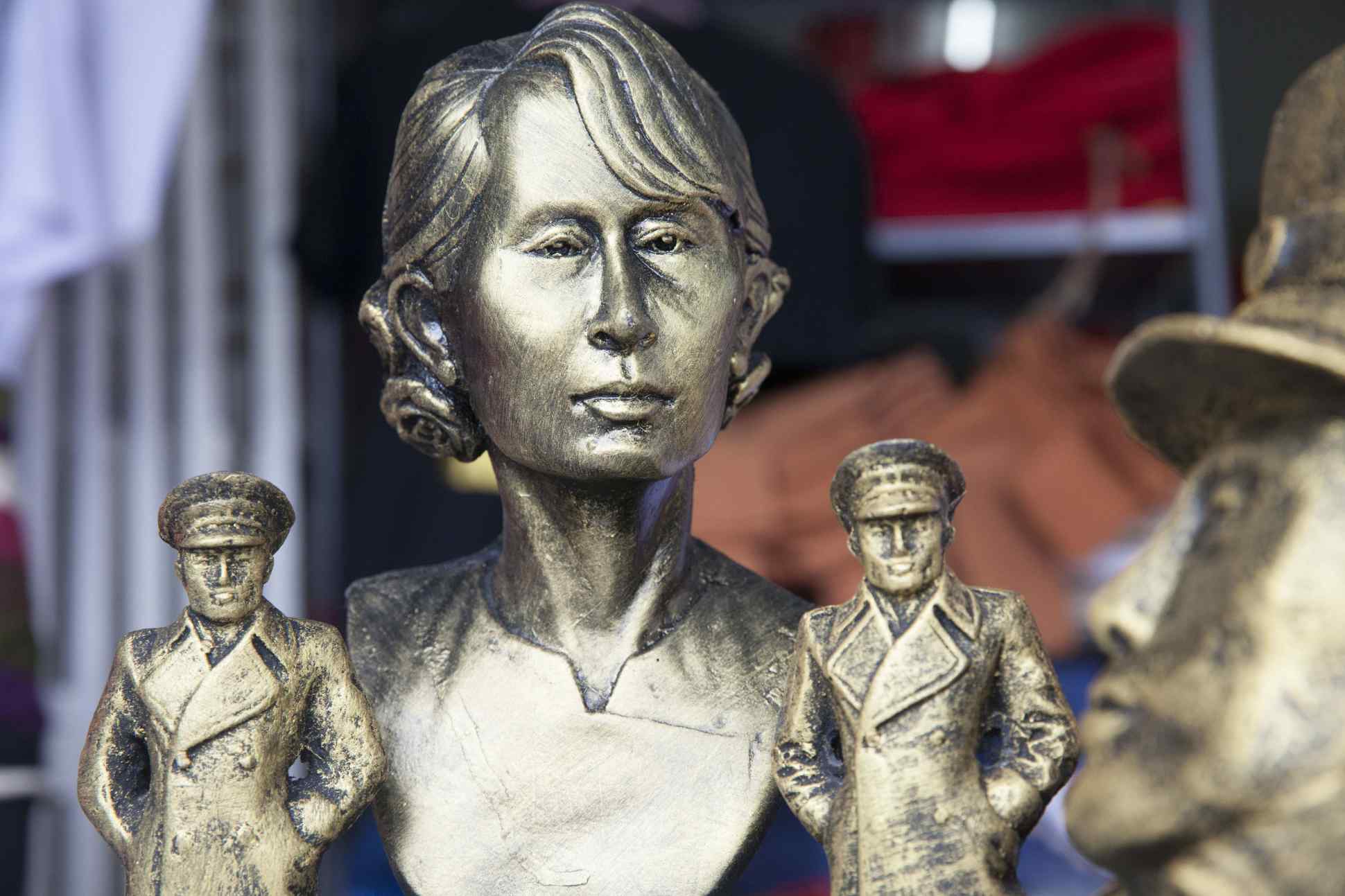 YANGON -- Aung San Suu Kyi's first anniversary as Myanmar's de facto leader should have been the celebration of a glorious beginning. The year started with the handover of power on March 30, 2016, by the military-backed government of President Thein Sein to her National League for Democracy. Months earlier, the NLD had swept national elections, winning nearly 80% of contested parliamentary seats.

Her stance reflected the extraordinary divide in the country today, which has seen widespread public euphoria surrounding the NLD's rise shift into a more tentative mood. While activists and media have complained bitterly about backsliding on issues such as freedom of speech, the business community and other elites have slammed bureaucratic holdups and ministerial incompetence as well as delays in key legislation.

Ethnic groups have accused the new government of mishandling the peace process and have launched fresh offensives against military forces. Former NLD supporters have expressed anger about their lack of input and what many see as over-centralized decision-making. And diplomats have cited concerns about the government's human rights record, not just in terms of sectarian issues but also the military's counterinsurgency campaign and an overall erosion of freedoms -- as well as the government's proposed new "law concerning foreigners," which contains onerous reporting and visa provisions for expatriates.

Still, as anyone traveling in the country can discern, support levels for the state counselor remain high among the vast rural population in areas dominated by Myanmar's Burman, mainly Buddhist, majority. "She is our mother," said San Than, a noodle vendor on the outskirts of Yangon, in early March. "Any problems Mother Suu is having, that is because of the old government, old ways -- she must fight it."

The remark sums up the enduring popular sentiment. In by-elections on April 1, the NLD government won only nine of the 18 seats it contested. But the losses were confined mainly to ethnic minority areas, which account for half of Myanmar's 14 states and regions.

One senior Western envoy in Yangon spoke of a "multidimensional disconnect" -- between urban and rural; minority ethnic and Burman; elites and the lower rungs of society; and more broadly, between international and domestic responses.

Reinforcing such divisions, Suu Kyi's anniversary as state counselor, similar to a prime minister in a semi-presidential democratic system, was marked by a series of setbacks. 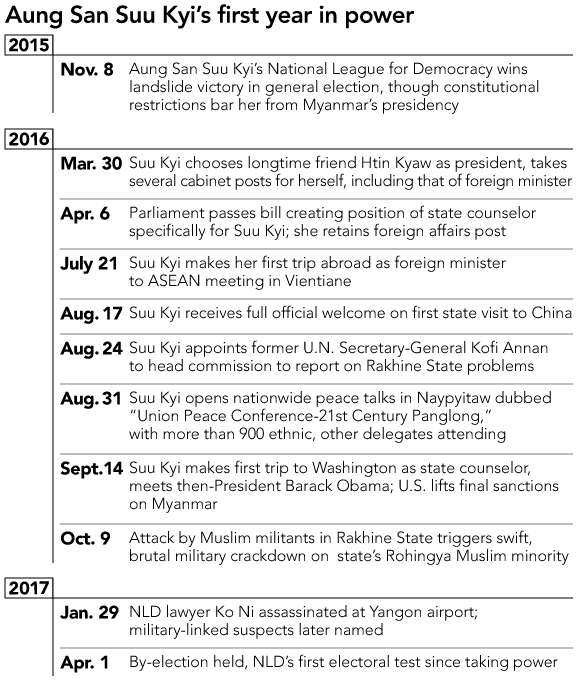 From the international perspective, the most pressing problem for Suu Kyi -- and potentially for investors worried about reputational risk -- is the escalating controversy over human rights. Just days before the anniversary speech, the United Nations Human Rights Council called for an investigation into abuses against the Rohingya Muslim minority in Rakhine State, where more than 120,000 languish in detention camps and 75,000-plus fled a military crackdown starting in early October. The crackdown, triggered by attacks by Muslim militants in Rakhine that killed nine border police guards, generated reports of widespread torture, rape and arson.

On March 24, the U.N.'s top human rights body voted to send an international fact-finding mission to Myanmar to look into atrocities against the Rohingya. This was after a U.N. report asserted that Myanmar's armed forces had "probably" committed crimes against humanity.

Myanmar -- itself a council member -- issued a terse response, calling the resolution an "unacceptable" outcome that was against the country's interests.

For Suu Kyi, a Nobel laureate and former political detainee, the condemnation was a shock, according to people close to the government. "But it was the kind of shock that seems to have stiffened her resolve," said one longtime observer in Yangon. "She's angry that countries that supported her would turn, she doesn't 'get it,' why the world doesn't understand."

Indeed, the entire Rakhine crisis, including earlier waves of violence by extremist Buddhists against minority Rohingya, has highlighted Suu Kyi's greatest vulnerability, and the issue that irks her most of all: her lack of control over the military. 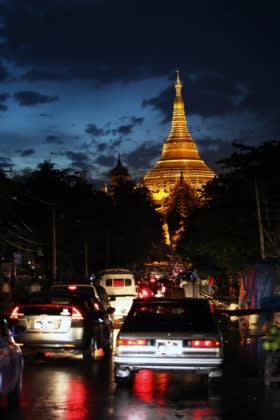 In a combative speech to mark Armed Forces Day on March 27, Senior Gen. Min Aung Hlaing, the influential military chief, defended the security campaign. Insisting there was "no such race termed Rohingya in Myanmar," he warned against international interference in the country's affairs. The response not only augured badly for Myanmar's diplomatic efforts. It summed up the fragile balance between the civilian government and the powerful military.

Suu Kyi, while shaken by the international condemnation, has been forced in some ways to side with the military, rejecting the U.N. efforts to send external investigators. She is known to have warned senior European and other Western diplomats before the UNHRC vote that such grave censure could "bring her government down," according to one European Union diplomat. Up to now she has remained largely silent on discrimination faced by Myanmar's Muslim minority, in particular by the mainly stateless Rohingya, and in 2015 excluded Muslims among NLD candidates for the national election.

QUESTION OF SUCCESSION In her year in office, Suu Kyi has displayed other blind spots and an almost schoolmarm style. She instituted a "report card" system to assess the performance of ministers and government departments, and set up a large number of committees and councils, mostly chaired by herself. While reflecting the need to bypass an unwieldy bureaucracy, the result has been virtual paralysis in some respects, including urgent decisions on key economic matters -- power and other infrastructure projects, approvals for foreign investment, and even health and education.

Her over-centralized and sometimes autocratic approach has alienated some old friends and allies, and has led to the departure of some formerly close supporters from the NLD and even personal circles, including her once-loyal assistant Tin Mar Aung. In recent months, upheavals in the NLD have featured conflicts over appointments to government and party positions, and internal struggles in key branches such as in Shan State. The recent departure of the chief minister of Mon State amid corruption allegations was another blow to party unity.

A particularly tragic setback was the assassination in January of longtime supporter and NLD legal adviser Ko Ni, who was gunned down at Yangon's international airport. Suu Kyi was "deeply affected" by the murder, an NLD official said.

As she marked her anniversary, however, Suu Kyi also had a more pressing issue on her mind, judging from internal NLD speculation over the growing distance between the state counselor and her hand-picked so-called "proxy president," her old friend and ally Htin Kyaw.

Suu Kyi herself is barred from the country's highest office due to constitutional restrictions. She made clear when her government came to power that she would be "above the president." But NLD insiders and diplomats say Htin Kyaw, tiring of the endless string of ceremonial duties and offhand treatment by Suu Kyi, has expressed a desire to resign.

Whether the president goes or stays, increasingly visible cracks in the administration have triggered talk of further departures -- and the thorny question of succession to Suu Kyi, who turns 72 in June.

Among her tight circle of friends and backers are Win Htein, a former military officer and "hatchet man" who largely oversees party issues; Tin Myo Win, Suu Kyi's family doctor, who headed the NLD health network and has been entrusted with the peace process; and Phyo Min Thein, the dynamic chief minister of Yangon and a man tipped by many as a potential future leader. Possibly the closest to the state counselor, however, is Shwe Mann, the former parliamentary speaker and senior member of the pre-2011 junta, who was ousted from the leadership of the then-ruling Union Solidarity and Development Party in 2015.

The question is whether the Suu Kyi "brand" -- linked to popular admiration of her late father, independence hero Gen. Aung San -- would extend to a protege. Already, leaders of the popular civil society movement 88 Generation have announced they will form a party to compete in the 2020 elections. As for the former ruling USDP, supporters now talk of the military's chief, Min Aung Hlaing, as a potential standard-bearer.

Only one thing is certain, noted a veteran Western diplomat: "Whether you like her or not, those kitten heels will be very hard to fill."