A customer does business at AYA Bank in Yangon.   © Reuters
The lady in question

One year on, red tape and regulatory holes are hobbling growth

YANGON -- When the National League for Democracy took power in Myanmar last year it inherited one of the world's fastest growing economies, but one still tangled in an arcane web of rules and regulations and in desperate need of modernization.

The law governing companies dated from the pre-1948 British colonial period. Customs procedures were still paper-based. Power cuts were rife, particularly during the hot season. The fragile banking system was in urgent need of stronger supervision. Much of that still holds true.

The enormity of the task facing the new government was matched by the huge expectations of voters, who gave the NLD a clear mandate for progress. The business community had more insight than most sectors of society about the magnitude of the economic reform task. But one year into the NLD's four-year term, many business leaders feel the results have been mixed, at best.

"Myanmar is a frontier economy with massive long-term growth potential and it is the government's duty to create a business environment to enable that progress," said Khin Maung Win, chairman of Myan Shwe Pyi Group, the exclusive dealer for Caterpillar construction equipment in Myanmar. "The gap between current private sector-led growth and the pace of government's reforms is a concern."

Thiri Thant Mon, managing director of Yangon-based investment firm Sandanila, sympathizes with the government's task of fixing decades of misdirection. "But the early signs of where this government is heading have not been encouraging; I am particularly concerned with the lack of focus on the economy," she said. 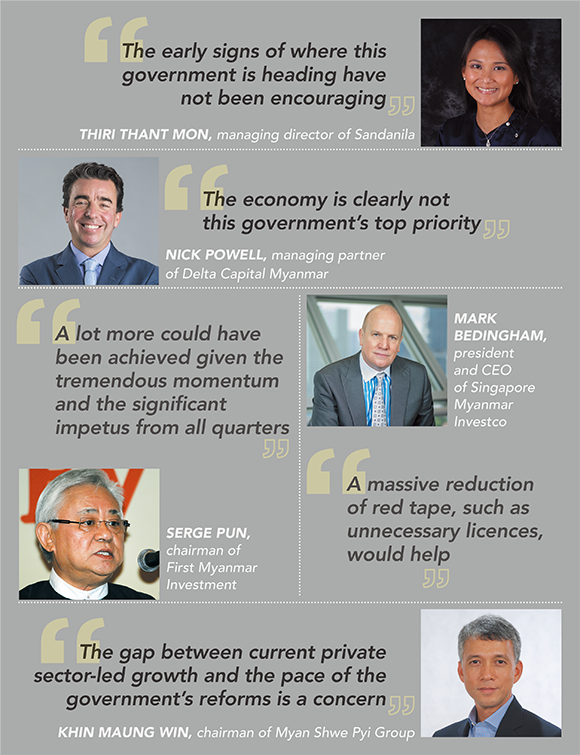 "Sustainable growth requires getting the economy right to afford investments in essential physical and social infrastructure; many forget that Myanmar is not simply emerging from decades of oppression, it is a transition economy akin to ex-Soviet bloc countries," she noted. "If we do not get our economy right, the political freedoms that we finally might enjoy may not be long-lasting." Serge Pun, chairman of First Myanmar Investment -- the first company to list on the Yangon Stock Exchange -- feels that on specific sectors the government's first-year scorecard has been "checkered."

"A lot more could have been achieved given the tremendous momentum and the significant impetus from all quarters," he said.

Along with a fragile economy, the NLD inherited a complex peace process with armed ethnic groups aimed at ending a multifaceted civil conflict spanning seven decades. Much of State Counselor Aung San Suu Kyi's effort as the government's de facto leader has gone into reconciliation.

"The economy is clearly not this government's top priority," said Nick Powell, managing partner of Myanmar-focused private equity fund manager Delta Capital Myanmar. "We are seeing the effects of this uncertainty in levels of new investment and in consumption at the street level," he told the Nikkei Asian Review.

Powell sees some progress on economic reform -- although he stressed that key elements still to come, including changes to the legal framework, will be crucial. Parliament passed a new investment law in 2016 that should help streamline the investment process, give regional authorities the ability to greenlight smaller projects and allow the government to direct foreign capital toward key locations. The insurance sector is being liberalized. Parliament is expected soon to pass a new company law to replace the colonial era legislation.

"That will clarify the rules for investment and will significantly increase the ability [of] foreigners to invest in Myanmar; it's crucial," Powell said. There are hopes the law will enable foreign investors to hold up to 35% of shares in a local company without it being classified as a foreign entity. At present, companies must be 100% domestically owned to count as local.

"There's a bunch of people that would like that [option]," said Edwin Vanderbruggen, a partner at Yangon-based law firm VDB-Loi, noting strong foreign investor interest in local companies in the petroleum, hospitality, health care and real estate sectors.

Telecoms and connectivity is another bright spot. The government has auctioned off spectrum to internet service providers. There are three telecom companies operating, all of which offer 4G service in some areas. They are waiting on a delayed government auction of another spectrum band to expand fourth-generation coverage across the country. A fourth and final operator, Mytel, is expected to enter the market later this year.

"We see a lot of positive aspects in our industry," said Stephane Lamoureux, chief information officer of the KBZ Group and CEO of KBZ Gateway, the group's communications network business. "Fiber is being deployed countrywide and expansion of the core fiber network is critical for all industries." Zhang Liman, CEO of China's Huawei Technologies in Myanmar, hopes to see more development in fixed broadband, where the country still badly lags the rest of the region. "But there has been rapid improvement in the country's appetite for more advanced, innovative technology and broadband solutions," he said. Yet while connectivity is improving and private companies are opening up to foreign investment, there is an urgent need for progress on large-scale government-led infrastructure projects. The previous Thein Sein government oversaw Myanmar's first international standard tender for a power project -- the Myingyan gas-fired power plant being built by Singapore-based Sembcorp Industries.

The NLD government conducted its first power supply tender last year and selected two international companies for two separate 300 megawatt projects. But as of mid-March, it had failed to sign a deal for either, leaving Yangon once again facing a summer of blackouts. Other sectors show a similar absence of new projects. "Water, transport, roads -- we're not getting that done," said Vanderbruggen.

Mark Bedingham, president and CEO of Singapore Myanmar Investco, which has investments including retail, duty free sales, logistics and construction services, said the government as should urgently focus on "infrastructure projects that can bring immediate results," alongside faster integration of the border regions into the national economy. "A massive reduction of red tape, such as unnecessary licenses, would help, as would aligning the regulatory environment to the ability and resources of the civil administration to effectively administer regulations," he noted.

The delays have had a knock-on effect for other industries. John Hamilton is Myanmar country manager for CEA Project Logistics, which had planned to help ship in equipment for power projects that are now uncertain. Partly due to logistical problems, Myanmar languishes in the bottom 20% of countries in the World Bank's ease of doing business rankings for cross-border trade. 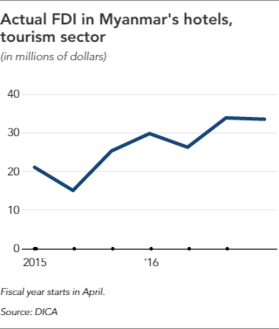 With help from Japan, the government installed an automated customs system in Yangon's ports and airports in December, in an effort to facilitate trade. But so far the system has brought only more delays. "Customs clearance is still taking longer on goods coming into the country," said Hamilton. "The new system is taking time to bed in, and hopefully things will improve."

In the financial sector, the Central Bank of Myanmar also shares blame for lack of progress. In early 2016 -- two months before the NLD took power -- a new Financial Institutions Law was passed, paving the way for the central bank to enforce much-needed regulations on aspects such as capital adequacy and asset classification.

But more than year later, "there is still no discussion on the required changes, nor of publication of the road map for implementation of regulatory or supervisory changes -- nor a time frame for banks to comply with the new framework," said Azeem Azimuddin, chief financial officer of AYA Bank, one of Myanmar's largest local lenders. "An interactive process involving all stakeholders could accelerate deregulation while minimizing risk of systemic shock," he noted.

Hal Bosher, CEO of Yoma Bank, agrees that the underlying strength of the financial system needs to be addressed. Bosher also wants to see the interest rate ceiling on bank loans removed to provide more market-driven rates. But there are also many more straightforward improvements the government could make: "Liberalizing banking hours so that people who finish work can deposit money the same day is one example," he said. Bank branches in Myanmar close at 3 p.m. during the week and are closed on weekends.

Business executives in Myanmar often point to such simple things that the government could do to make life easier. "For us, it's about improving the basics," said Peter Witton, director at Myanmar-based investment and advisory group Anthem Asia. "In a year's time if it's easier to make bank payments, agree long-term property leases, pay taxes and employ people, then we will be happy."

Others set the bar higher. Among the top priorities for the government's second year, according to Khin Maung Win, should be, first, "very aggressive financial reforms to integrate Myanmar into the global financial system." Second, he says, Myanmar needs highly competitive trade and tax policies to facilitate trade; third, the government should reorganize ministries and step up efforts to tackle the legacy of economic disorder; and finally, overhauling an "inherited organizational structure, culture and mindset that are not aligned with the new economic strategies."

Despite a long wish list of improvements, there is still widespread optimism across the business community that the government can and will do better.

"My consolation may have to lie in my optimism that the highest authorities recognize the fact that progress is lagging behind what it should be, and that corrective measures will be taken at the earliest [moment]," said Pun.