ASEAN and India prepare for Olympics as opposition grows in Japan

MANILA -- Philippine rower Cris Nievarez felt fired up for the Tokyo Olympics after receiving his COVID-19 jab at a Manila hotel on Friday.

"Now that I am vaccinated, I feel more confident because we can now increase our training," the 21-year-old told Nikkei Asia.

The Philippines on Friday vaccinated members of its Olympic and Southeast Asian Games delegations, joining neighbors who are also gearing up for the Tokyo spectacle as the host country faces mounting public pressure to scrap the event, set to get underway on July 23.

Opinion polls show Japanese citizens are opposed to the games, fearing a COVID superspreader event, and demonstrations are not uncommon. On Thursday, the head of a Japanese doctors union called for the Tokyo Olympics to be canceled. Holding the event, he said, would be "extremely dangerous" amid Japan's fight against its fourth and most stubborn wave of coronavirus infections.

Tokyo and nine other prefectures are currently under a state of emergency. Protesters who fear a superspreader event demonstrate against the Tokyo Olympics near National Stadium on May 9. (Photo by Ken Kobayashi)

Outside Japan, however, support for the once-postponed games is building. The European Union, after a summit with Japan, yesterday backed the games, saying they would be held "in a safe and secure manner this summer as a symbol of global unity in defeating COVID-19." The U.S. has also thrown its support to the Tokyo Olympics despite telling its citizens not to travel to Japan.

In several Asian countries outside Japan, sports officials and political leaders are helping to boost their athletes' morale. Stakes are higher in countries like the Philippines, where a sports official said the country is "thirsty for a gold."

"It [might be] our first gold after 100 years," Philippine Olympic Committee President Abraham Tolentino told Nikkei Asia on Thursday. "That's why I am supporting the Olympics and not the sentiment of the Japanese citizens."

Tolentino added that he believes Japan can host the games safely.

Nine Philippine athletes have officially qualified, but Tolentino, also a ranking lawmaker, expects that number to rise to at least 15. Weightlifter Hidilyn Diaz, who won a silver medal during the 2016 Rio Olympics, will be among the athletes representing the Philippines in Tokyo.

Others in the region appear to be on Olympics mode too.

"Thailand is ready for the 2021 Olympics," said Sport Authority Gov. Kongsak Yodmanee. Thailand has 25 athletes who have qualified for the Olympics, with 25 more hoping to make the cut.

Bangkok has vaccinated its athletes, and billboards urging locals to "Cheer Our Heroes" have been put up in the capital.

Malaysia, like the Philippines, is also gunning for its first gold. Almost all team members, coaches and officials were vaccinated recently. Youth and Sports Minister Reezal Merican Naina Merican said last week that the entire Malaysian contingent would be vaccinated before leaving for Tokyo in an effort to boost the athletes' confidence. 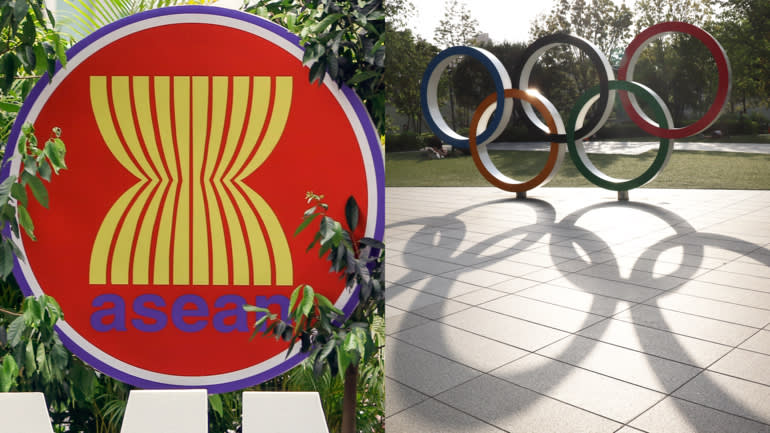 ASEAN countries are preparing for a Tokyo Olympics that many Japanese want canceled. (Source photos by Ken Kobayashi and AP)

As early as February, Indonesia had started inoculating its athletes, including 22 that have qualified for the Olympics.

Amid uncertainties about the Tokyo Games, the country plans to send its athletes as planned, said Raja Sapta Oktohari, president of Indonesia's National Olympic Committee.

"No cancellations have been made" on Indonesia's part, he said. "As long as [the commitment to go ahead is] there, we will not be affected and we [will] prepare logically, the athletes focus on training."

Team Singapore, meanwhile, is being cheered on by Prime Minister Lee Hsien Loong, who on Thursday posted a message of support for the city's athletes.

"Despite the disruptions, they have been training hard and making sacrifices, including deferring their studies," Lee wrote on his Facebook page, introducing a video clip that features the Singaporean athletes. "To our national athletes, I wish you all the best in Tokyo."

Local media outlet Channel News Asia on Thursday reported that about 220 athletes, coaches and officials had finished their vaccinations, citing an official from government agency Sport Singapore. The official said Singapore would continue to "progressively" vaccinate athletes and personnel ahead of the Olympics and toward the SEA Games in Vietnam later this year.

On Thursday, the Indian Olympic Association said the country's contingent has been given the first dose and will receive the second before leaving for Japan. More than 90 Indian athletes have so far qualified.

"We at IOA do not want to leave any stone unturned and are here to support the IOC (International Olympic Committee) Committee and the Tokyo 2020 Organizing Committee in every possible manner and aspect," association President Narinder Batra and Secretary-General Rajeev Mehta said in a statement.

"Despite [the] pandemic [the government] is doing everything possible to support our athletes to make India proud," he tweeted, adding Prime Minister Narendra Modi has directed them to provide full support to the country's elite and junior athletes.

Yet, not all Olympic bids in region are proceeding well. Burmese swimmer Win Htet Oo, 26, last month announced he will skip the Olympics to protest the military coup in February that has left the country in turmoil.

He also urged the IOC to refuse to acknowledge the Myanmar Olympic Committee, controlled by officials with ties with the junta. "I warn that any continued association will irrevocably tarnish the IOC's good standing," Win Htet Oo said a statement.

Also, up to 10 Myanmar players are boycotting the country's soccer World Cup qualifier against Japan in Chiba, near Tokyo, on Friday evening.

As Japan and the IOC weigh the political and financial repercussions of holding or canceling the Tokyo Games -- and as some Japanese fear possible risks to their own health -- athletes like Niavarez of the Philippines see the Olympics not only as the pinnacle of their sporting career but as an opportunity to make their countries proud.

"It's an honor to represent the country's campaign to win its first Olympic gold medal," Nievarez said, "and I will do my best to win."