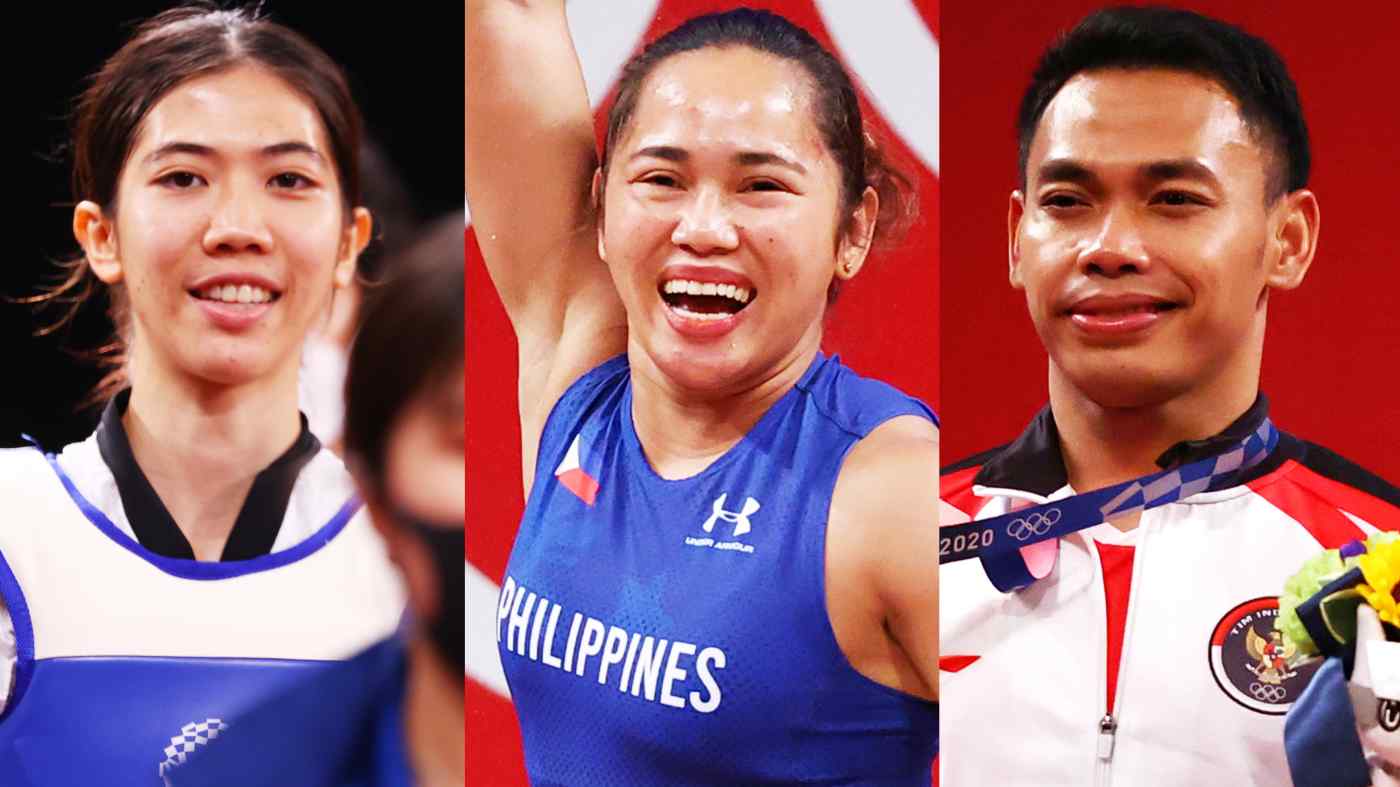 MANILA/BANGKOK -- Southeast Asian medalists at the Tokyo Olympics are receiving lavish rewards for their accomplishments, in addition to a hero's welcome when they return home.

Philippine weightlifter Hidilyn Diaz, who won her country's first-ever Olympic gold medal, will receive one or more homes and other prizes, on top of cash payments much larger than the official prize money on offer.

Diaz completed a total lift of 224 kg, a new Olympic record, in the women's 55 kg weight category on Monday. The historic achievement put an end to the Philippines' Olympic gold medal drought, which stretches back to when the country first competed in the Games around 100 years ago.

The government is offering a cash award of 10 million Philippine pesos ($200,000) to gold medalists. But Diaz is expected to be paid 33 million pesos or more, as Filipino businessman Manuel Pangilinan and others have offered donations to her, according to announcements by local companies and media reports.

There are other prizes coming, including homes and cars. On Tuesday, a property developer affiliated with Alliance Global Group, led by real estate tycoon Andrew Tan, offered Diaz a condominium, valued at 14 million pesos, in Metropolitan Manila. Chinese automaker Beiqi Foton Motor said it will provide her with a 13-seat van for family trips. The finances of weightlifter Hidilyn Diaz of the Philippines, the first-ever country's gold medalist, were so precarious that she took to social media to appeal for private sponsorships.   © Reuters

Philippine President Rodrigo Duterte has pledged to pay Diaz 3 million pesos out of his own pocket and provide the weightlifter a furnished house and a land lot in her hometown in southern Mindanao.

This is an about-face for Duterte, whose administration in 2019 labeled Diaz a person who could undermine trust in the government. Congratulating Diaz on her achievement at the Tokyo Games, Duterte urged her to "let bygones be bygones."

In Thailand, Panipak Wongpattanakit, who became the kingdom's first Olympic gold medalist in taekwondo, was appointed sports and tourism ambassador by the government on Wednesday. Local media described Panipak, who knelt down to express thanks to her father after returning home, as receiving a hero's reception.

Panipak will be awarded nearly 20 million baht ($604,000) in total from the government's National Sports Development Fund and other sources, according to the English-language daily Bangkok Post.

The amount of cash prizes awarded to Olympic medalists varies widely from country to country.

Because Southeast Asian athletes win relatively few medals, countries in the region tend to offer them huge monetary awards to promote sports. This offers athletes a rare opportunity to reap a financial reward from their sports. Many, like the Philippines Diaz, struggle to make ends meet while training for the Olympics.

The Japan Olympic Committee, on the other hand, awards a relatively modest 5 million yen ($45,650) to gold medal winners.