Fanless but not funless: Japan tries to bring cheer to Olympics

From Tokyo to Sapporo, first events begin ahead of opening ceremony Members of Australia's softball team prepare for the Olympics at a training camp in Japan. They play the opening game with Japan on July 21.   © Reuters
Nikkei staff writersJuly 21, 2021 05:31 JST | Japan
CopyCopied

TOKYO -- Fukushima Azuma Baseball Stadium, the venue for the upcoming Olympic softball game between Japan and Australia, was guarded closely by police officers Tuesday. A "no entry" sign stood at the front doors.

Eager to brighten up a venue that will have no spectators, high school students in the northeastern prefecture installed a flower bed at the entrance. It showcases locally grown begonias and marigolds arranged in the shape of the Olympic rings.

"We wanted to show that the people of Fukushima welcome the Games even though no spectators are allowed," a prefectural representative said.

The first game of the softball tournament will be held Wednesday morning, ahead of the Olympic opening ceremony Friday.

"I hope the flowers help bring more excitement for Olympic events in Fukushima," said a third-year student who helped install the bed.

"I hope the athletes see the flowers when they're feeling nervous," a second-year student added.

As the first events of the Tokyo Olympics kick off Wednesday, host cities across Japan have scrambled to make athletes feel welcomed amid coronavirus restrictions and the spectator ban.

Athletes from over 200 countries compete in 33 sports across nine prefectures throughout the weekslong event, from the northern island of Hokkaido to the bustling capital region.

Besides the softball game in Fukushima, six women's soccer matches are also scheduled for Wednesday, including in Sapporo.

Tokyo Stadium in the city of Chofu was eerily quiet on Tuesday, with the area blocked to traffic in anticipation of an Olympic soccer match there the following day.

The venue initially was to include booths where visitors could try their hand at traditional Japanese calligraphy and flower arrangement, but the idea was scrapped after the government decided to ban spectators.

"It's hard to extend our hospitality in an Olympics amid the pandemic, since there are no foreign tourists, and athletes are not leaving venues," a city representative said. Tokyo is under its fourth state of emergency as coronavirus infections rise.

With parts of Japan in the midst of a fourth coronavirus state of emergency, spectators have been banned in six prefectures including Tokyo and its neighbors. 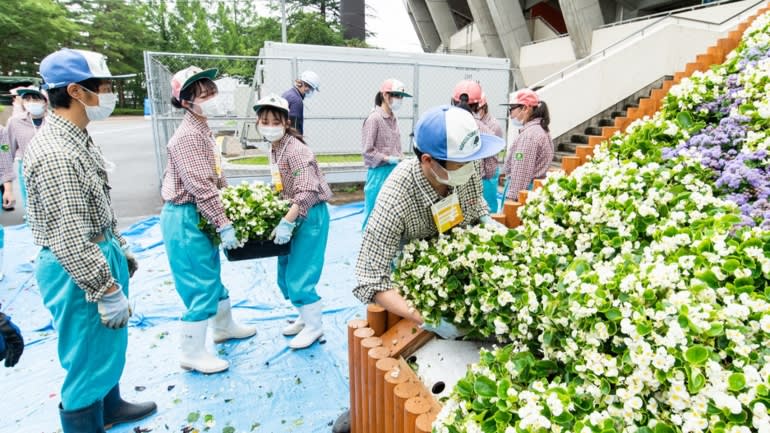 Students from a local high school arrange flowers outside an Olympic venue in Fukushima, Japan.   © Reuters

The spectator ban also left thousands of volunteers in the lurch. Olympic organizers are reshuffling volunteers they directly oversee. A 65-year-old volunteer first responder, who now will work primarily with Olympic staffers instead of spectators, said he was "thankful for the opportunity."

But many volunteers managed by municipalities, who were supposed to provide local support, find themselves without a job. Fukushima Prefecture cut a roughly 1,100-member volunteer program originally intended to direct fans and perform other odd jobs.

"I wanted to show my gratitude for the support the world showed us after the 2011 Fukushima earthquake and tsunami, but I no longer have the chance," a 57-year-old participant said.

Sapporo has diverted the 320 local volunteers assigned to distribute maps during soccer matches there, using them to guide people along the marathon course instead.

"There are limits to what we can do, but we hope to provide a positive experience by preventing confusion at the site," a city representative said.