Inside Abe's push to keep Olympics in Tokyo, even with delay

With Trump's '1,000% support,' prime minister desperate not to cancel

TOKYO/GENEVA -- As it became clear that starting the Tokyo Olympics in late July as planned was out of the question while the coronavirus pandemic raged on, Japanese Prime Minister Shinzo Abe set out to avoid the worst-case scenario of calling off the games altogether.

Abe instead moved to lay the groundwork to ensure the games will be held in Japan, even if not this year. For this, he turned to his personal rapport with U.S. President Donald Trump and focused on shaping the narrative on the international stage.

The turning point came in a March 13 phone call with Trump, who called to discuss COVID-19 measures. Abe used the opportunity to tell him that Japan was still trying its best to hold the Olympics as planned.

The day before, Trump had told reporters at the White House that Japan could postpone the games. "I think if you cancel it, make it a year later, that's a better alternative than doing it with no crowd," he said.

In the phone call, Trump doubled down on his backing for his friend.

"I support the Tokyo Olympics 1,000%," the president said, according to sources familiar with the conversation. 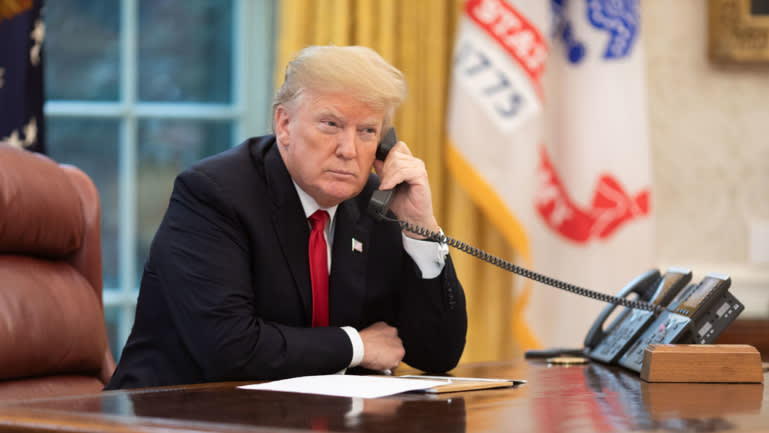 U.S. President Donald Trump speaks on the phone in the Oval Office. Trump's backing was crucial for Abe as the Japanese leader sought to build a consensus to keep the Olympics in Japan. (Photo courtesy of the White House)

"You should hold it in Japan," he said. "I hear the stadium is wonderful."

With these words, Abe gained confidence that he could avoid a cancellation.

The Japanese leader set his eyes on the Group of Seven video summit scheduled for March 16 to forge a consensus on still holding the games in Tokyo.

In the videoconference, Abe told the leaders it was his wish to hold the 2020 Tokyo Olympics and Paralympics "in their full form" as a symbol of humanity's victory over the virus.

The term "full form," which Abe came up with himself, meant that he opposed holding sporting events without spectators or scaling down the games.

By then, it was unrealistic to insist that the games open July 24 this year. But no one was taking a clear stand -- not even the International Olympic Committee, which has the final say. Abe felt that he had to set the tone at the G-7.

On March 17, after consulting with various sports federations around the world, the IOC said that it "remains fully committed to the Olympic Games Tokyo 2020" and that with more than four months to go, "there is no need for any drastic decisions at this stage."

But with infections spreading rapidly, the situation changed by the day. National Olympic committees and international sports federations began voicing their athletes' concerns to the IOC.

On Sunday, the IOC held an extraordinary session via phone and discussed setting a four-week deadline for determining how to proceed with the Games, including a postponement.

That day, Canada decided not to send athletes to the Tokyo Olympics, owing to the coronavirus, and called for a one-year delay. Postponement had become inevitable.

But the tone Abe had set at the G-7 -- for a "full-form" Olympics in Japan at some point -- had not shifted. IOC President Thomas Bach told Yoshiro Mori, the president of the Tokyo 2020 organizing committee, by phone Sunday that cancellation was not in any way part of the discussions at the organization.

"Europe and the U.S. are in a state of emergency over the coronavirus," said Mori, until now one of the staunchest defenders of the July games, in a news conference Monday. "Japan is on high alert as well. I'm not foolish enough to insist that the games go as planned."

And on Monday, Abe himself touched on the possibility of a postponement for the first time during a parliamentary session. "If the IOC's decision [in four weeks] means it becomes impossible to hold the Olympics in full form," Abe said, "then a decision may have to be made to postpone them."

Later on Monday, Trump tweeted his support for Abe again.

"We will be guided by the wishes of Prime Minister Abe of Japan, a great friend of the United States and a man who has done a magnificent job on the Olympic Venue, as to attending the Olympic Games in Japan," he wrote. "He will make the proper decision!"