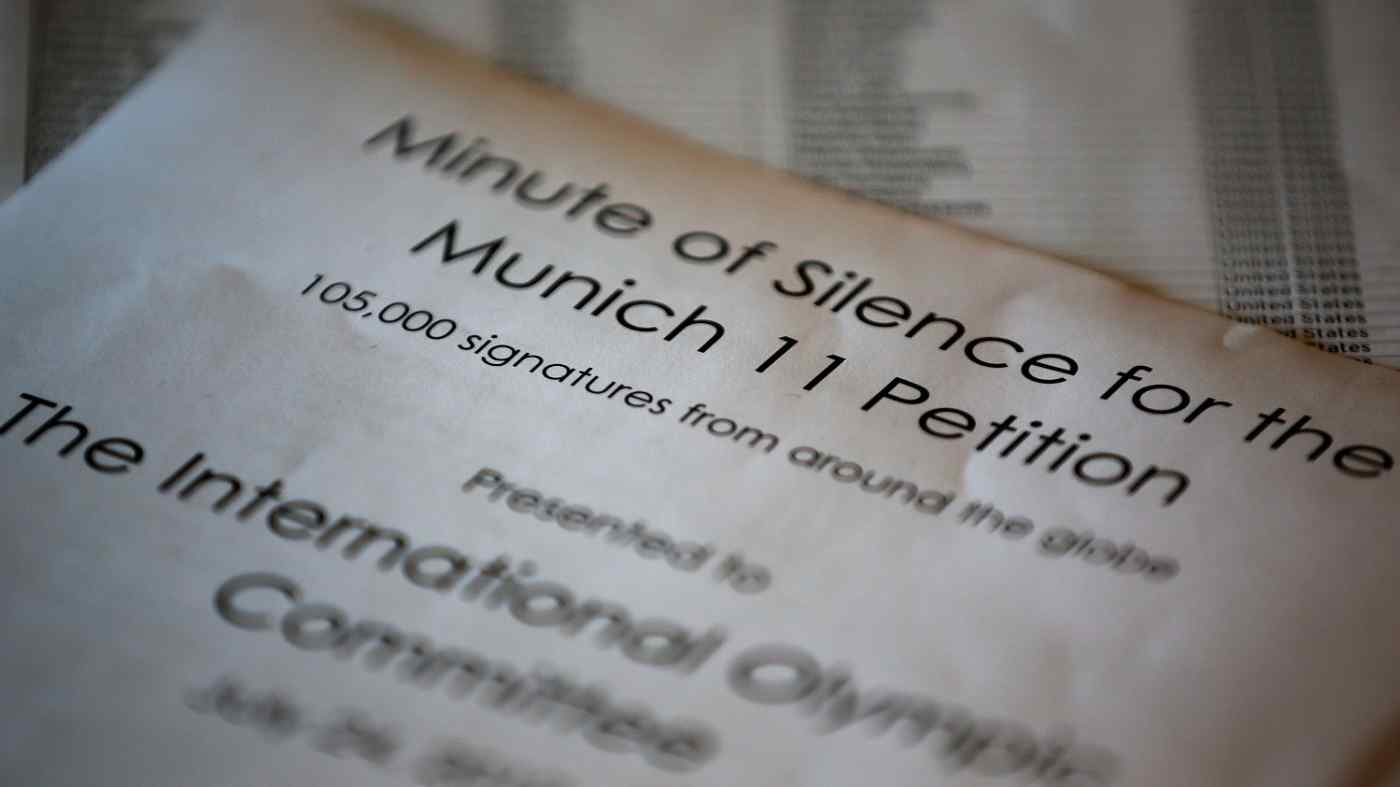 A petition for the minute of silence is presented to reporters by Ankie Spitzer and Ilana Romano, widows of Israeli athletes killed at the 1972 Munich Olympics, in London in July 2012.    © Reuters
July 23, 2021 22:49 JST | Europe
CopyCopied

TOKYO (Reuters) -- Israeli Olympic team members killed by Palestinian gunmen at the 1972 Munich Olympics were remembered during the Tokyo Olympics opening ceremony on Friday with a moment of silence, the first time in 49 years this has happened.

The move was welcomed by relatives of the victims and the government of Israel. The families of the 11 killed had long asked the International Olympic Committee to hold a minute's silence at a Games opening ceremony but had been turned down for almost half a century.

"We, the Olympic community, also remember all the Olympians and members of our community who have so sadly left us, in particular we remember those who lost their lives during the Olympic Games," said an announcer during the opening ceremony.

"One group still holds a strong place in all our memories and stand for all those we have lost at the games - the members of the Israeli delegation at the Olympic Games Munich 1972," the announcer added as the stadium darkened and a soft blue light illuminated parts of the arena.

On Sept. 5, 1972, members of the Israeli Olympic team were taken hostage at the poorly secured athletes' village by Palestinian gunmen from the Black September group.

Within 24 hours, 11 Israelis, five Palestinians and a German policeman were dead after a standoff and subsequent rescue effort erupted into gunfire.

"The Tokyo Olympics have just opened, but they are already a historic Olympics - after 49 years, on the main stage, at the opening ceremony, the 11 heroes, the victims of the Munich Olympics, were mentioned," said Hili Tropper, Israel's minister of culture and sport. "Better late than never."

He thanked IOC president Thomas Bach for doing "historic justice" to the matter.

"The tears don't stop flowing," Ilana Romana, widow of weightlifter Yossef Romano, told Israeli public broadcaster Kan. She said they "fought for this for decades and the decision should have come much sooner".

The inclusion of a moment of silence was also welcomed by the March of the Living, an international Holocaust memorial organisation that campaigns against anti-semitism, saying it was "long overdue."

Relatives of those killed had sought for them to be remembered at opening ceremonies but the IOC had previously ignored those requests.

Instead of a ceremonies commemoration, the IOC in 2016 inaugurated the Place of Mourning in a leafy part of the Olympic village at the Rio de Janeiro Olympics to remember those who had died during the Olympic Games, with two of the Israeli victims' widows present.

The Place of Mourning featured two stones from ancient Olympia encased in glass and had been described as "closure" at the time by Ankie Spitzer, widow of her Israeli fencing coach husband Andre.