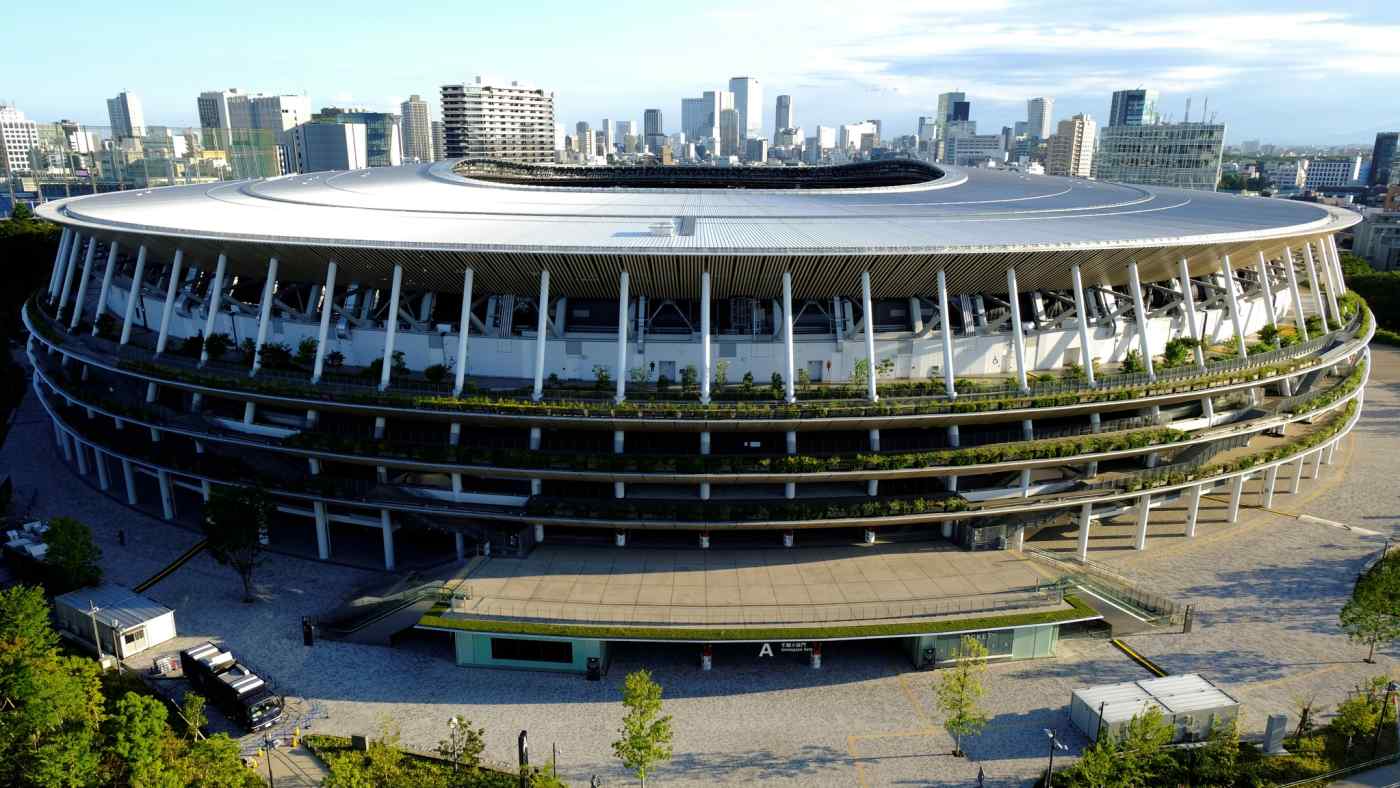 Stands at the National Stadium in Tokyo will be empty during the Olympics.    © Reuters
FRANCESCA REGALADO and RURIKA IMAHASHI, Nikkei staff writersJuly 9, 2021 03:39 JST | Japan
CopyCopied

TOKYO -- The Tokyo Olympics will be held without spectators at venues in the capital and three surrounding prefectures, the organizing committee announced Thursday, as the city enters a fourth state of emergency after a surge in COVID-19 infections.

After announcing a ban on spectators at Tokyo venues, the organizing committee consulted with Kanagawa, Saitama and Chiba prefectures and decided to hold events without fans there as well.

The Tokyo Olympics, postponed by one year due to the pandemic, now will be held without fans at the opening ceremony as well as at specific events in the host city and surrounding areas. The government had hoped to allow spectators with capacity limits, but rising cases upended that plan.

Soccer and baseball stadiums in Fukushima and Miyagi prefectures will be allowed to have spectators up to 50% of capacity and a maximum of 10,000 people. Ibaraki will allow only children to attend. Sapporo, which will host the marathons, has yet to decide on its spectator policy.

"I'm very sorry for all the people who were disappointed. I hope you understand the difficult choice that we made," Tokyo 2020 President Seiko Hashimoto said at a late-night news briefing. Nikkei reported that organizers were leaning toward the decision early in the evening, during five-way talks among the Japanese and Tokyo governments and Olympic officials. It comes hours after Japanese Prime Minister Yoshihide Suga announced emergency measures for Tokyo that will last through Aug. 22, covering the length of the Summer Olympics and ending days before the Paralympics begin.

Organizers will delay a decision on spectators at the Paralympic Games, which begin on August 24, until after the Olympics.

Speaking before the meeting, International Olympic Committee President Thomas Bach indicated that organizers were always open to the possibility of shutting out all spectators in the interest of a "safe and secure" games.

In the U.S., White House said that Japan was taking necessary health measures to ensure the Olympics go forward, and that first lady Jill Biden's attendance was still being assessed.

Tokyo 2020 organizers last month decided to cap spectators at 10,000 in large venues and ban alcohol sales at Olympic events, in response to criticism from a public that has lived through dry restaurants and closed bars since the end of April.

"This way, I think we'll have an easier time gaining the understanding of the people of Tokyo and Japan," Hashimoto said on Thursday night.

The organizing committee and their domestic sponsors, the 68 Japanese corporations that raised over $3 billion for the games, had held out hope that some local spectators would be allowed after overseas fans were banned from entering Japan in March.

The decision clouded Bach's arrival in Japan. Bach will quarantine for three days in Tokyo before visiting Hiroshima next week for the first day of the Olympic truce, a U.N. tradition to cease hostilities and grant safe passage to athletes. His lieutenant John Coates, who arrived in Japan mid-June, will visit Nagasaki on the same day. Athletes and other officials are meant to remain in Olympic bubbles in Tokyo.

Asked why the Olympics are being held while other large events such as rock festivals are canceled, Suga told reporters on Thursday evening that the games will also be subject to domestic restrictions.

"I have argued that I won't hesitate to ban spectators if a state of emergency is declared," Suga said. "I will do everything in my power to contain the infections and accelerate vaccinations to get back our normal life."

Thursday's decision follows the recommendations of Shigeru Omi, Japan's top medical adviser on COVID-19, who told Tokyo 2020 President Seiko Hashimoto in June that holding the games without spectators would be "least risky and desirable."

"We want to make sure that the next state of emergency is the last one," Yasutoshi Nishimura, the minister overseeing Japan's COVID response, said earlier on Thursday.

Placing the capital and its 14 million people under restrictions for a fourth time for the unpopular Olympics is a politically risky move for Suga, who must call a general election this October.

Although his party won the most seats in the Tokyo metropolitan assembly election last Sunday, the Liberal Democratic Party's failure to secure the majority was seen as a signal of voter dissatisfaction with the government's COVID response and Olympic plans.