TOKYO -- Japan on Friday declared a new state of emergency for Tokyo and three other prefectures. The decision comes just three months before the July 23 opening of the Tokyo Olympics and attempts to make the games "safe and secure," as surging coronavirus cases cloud the event.

The nation's medical system faces new pressure from the rise in infections tied to COVID-19 variants. The state of emergency -- the third declared in Japan since the onset of the pandemic -- includes Osaka, Kyoto and Hyogo prefectures and lasts from Sunday through May 11.

The latest emergency comes after earlier restrictions failed to slow the spread of COVID-19 and its variants, and with hospital beds becoming increasingly scarce. The new guidance includes asking restaurants and large businesses that serve alcohol to shut down during the 17-day period, while diners that do not serve alcohol will be asked to reduce their store hours and close by 8 p.m.

Restaurants that comply with the request to close will be eligible for cooperation money, or cash handouts; those that do not comply could be fined up to 300,000 yen ($2,780). In a bid to reduce commuting, public transportation operators like subways will be asked to move up their last train times on weekdays, as well as reduce the number of trains that run on weekends and holidays.

Department stores, amusement parks and theaters will be asked to close. Commercial facilities are also eligible for cooperation money. Sports leagues and other promoters will be requested to put on their events without spectators. Meanwhile, schools will not be asked to close all together but the government will urge them to limit after-school programs and club activities.

"Despite the emergency being short-term, it asks restaurants to close and requests in-depth cooperation -- for which I sincerely apologize," Prime Minister Yoshihide Suga said in a Friday news conference. "The number of infections has surged since last month, with variant cases also rising," Suga said, adding that "a high level of vigilance is needed, or infections could spread nationwide."

With no clear end to the pandemic in sight, Olympic organizers face increasing difficulty making important decisions and preparations. The Tokyo 2020 committee originally intended to determine this month whether domestic spectators would be permitted, but Nikkei reported Tuesday that the organizers now look to delay this decision.

The Olympic torch relay across Japan, intended to boost public excitement for the games, was canceled in Matsuyama, a city on the southern island of Shikoku. In Osaka, where COVID variants are spreading rapidly, a relay was held this month but runners avoided public roads as a countermeasure.

Based on estimates that 10,000 medical workers will be needed at competition venues and training centers, organizers remain "in discussion" with Tokyo's metropolitan government and local medical associations over how this will be realized, said Seiko Hashimoto, president of the Tokyo 2020 committee.

Roughly 30,000 athletes and officials are expected at the Olympics. Japan's inoculation campaign trails that of many other developed countries, and organizers do not plan to require vaccination for individuals present at the events. Tokyo 2020 is set to publish the second edition of the "playbook" guidelines for holding the games in a safe and secure manner this month. 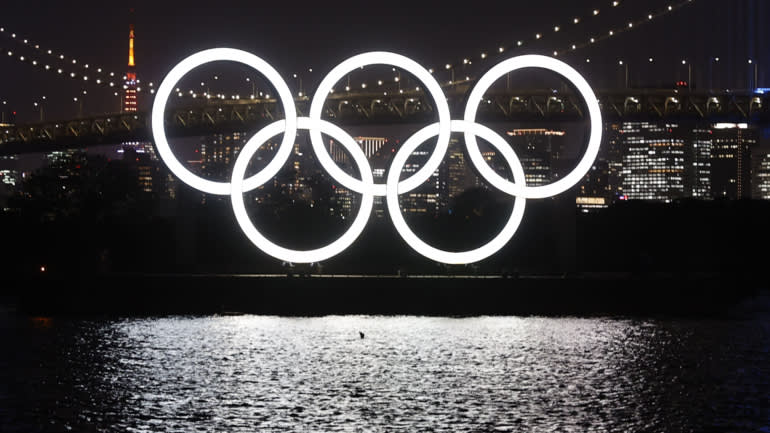 Olympic logo in Odaiba, Tokyo on April 22: The Japanese government declared a new state of emergency on Friday evening. (Photo by Hirofumi Yamamoto)

Toshihiro Nikai, secretary-general of Japan's ruling Liberal Democratic Party, made the surprising comment last week that canceling the Tokyo Olympics "could be an option" if the coronavirus spreads further. But the possibility was rejected by Hashimoto and Olympics Minister Tamayo Maruyama, stressing that they are not considering cancelation.

"The IOC has already decided to hold the games in Tokyo," Suga also noted during his Friday press conference. "We will work closely with each Olympic committee."

The prime minister faces a leadership test ahead of the general election expected this year for Japan's lower house of parliament. During the news conference, Suga also pledged to accelerate efforts to roll out vaccines as soon as possible and stated the aim of ensuring that each municipality can provide two rounds of vaccinations for elderly people who wish to receive them, by the end of July.

During his summit last week with U.S. President Joe Biden, Suga told reporters at the White House that Japan will host the games "as a symbol of global unity." The joint statement after the summit said that "President Biden supports Prime Minister Suga's efforts to hold a safe and secure Olympic and Paralympic Games this summer."

"It is a preventative measure, and for this limited time," he said, according to Kyodo News. "This is absolutely in line with the overall policy of the government, but it is not related to the Olympic Games."

Ahead of the declaration of the state of emergency, Hashimoto told reporters on Friday that she hoped the situation would improve through a series of measures to contain infections, while preparations for a safe and secure games continued.

Some Olympic test events are scheduled for May. The Diving World Cup is slated to begin on May 1 in Tokyo. Diving Australia announced Friday that it would not send athletes to the event as it believed it "would not be safe" amid a fourth wave of COVID cases.