TOKYO -- Responding to a dramatic surge in COVID-19 cases, Japanese Prime Minister Yoshihide Suga on Friday evening declared an expanded state of emergency in the capital's neighboring Saitama, Chiba and Kanagawa prefectures, as well as Osaka.

The alerts will last until Aug. 31, as will current emergencies within Tokyo and Okinawa. "I want [people] to act carefully about visiting families and other activities" over the summer holiday season, Suga said.

The alarm comes amid the ongoing Tokyo Olympics. But the Olympic superspreaders residents feared may not be the athletes, but themselves.

Games officials insist Tokyo 2020 is not responsible for the capital's recent rise in cases, which numbered 3,300 on Friday. That figure is down from the previous day's all-time high of 3,865, but it includes a record 1,367 infections of the fast-spreading delta variant.

Suga himself echoed Olympic officials at a Friday news conference, saying that the Olympics are not the reason for the current situation, because of measures such as letting in minimum staff from abroad and separating them from the Japanese public at airports. He also said he wants people "to watch the Olympics and Paralympics Games on TV and cheer at home."

The numbers appear to support the reasoning that the Olympics are not to blame: Despite extensive testing, organizers reported 27 new Games-related cases on Friday, for a total of 220 since July 1. 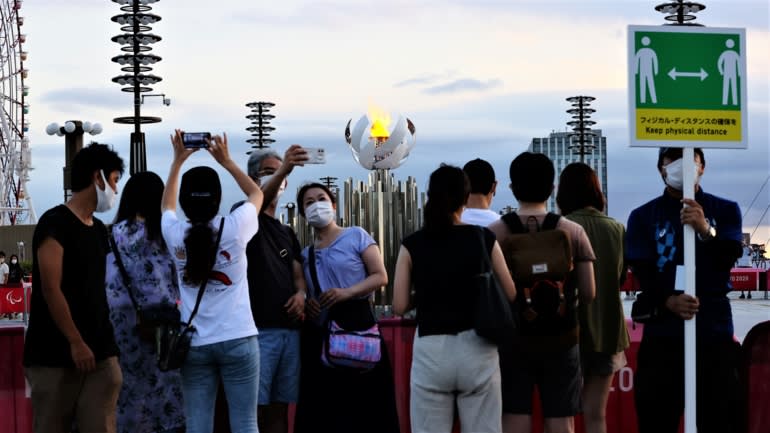 People snap photos of the Olympic cauldron: Despite a tepid public response to the Games, experts say they may be encouraging people to gather despite COVID-19.   © Reuters

Public opposition to the Olympics had centered on fears that they would turn into a superspreader event, importing COVID-19 variants from abroad to Japan. Instead, city government officials have attributed the spike to residents returning from a four-day weekend, which coincided with the opening of the Olympics a week ago.

"Since there are people who went to the medical institutions after the four-day weekend, that may have a certain effect," said Yoko Tamura, spokesperson for the Tokyo Metropolitan Government's bureau of social welfare and public health.

Suga also said at the Friday news conference that despite progress in vaccination, it is "worrying" that infections are spreading particularly among younger people under 40 years old.

Still, some experts suggest the Olympics' presence could be playing an indirect role.

Dr. Nobuhiko Okabe at the Kawasaki Institute of Public Health, though, thinks the Olympics are having an effect on public observance of COVID-19 guidelines.

"The risk is very low in the area of the Olympics, however the problem is that people are very excited to watch on TV and they want to enjoy together," said Okabe, who has advised Olympic organizers on their COVID-19 measures. Japanese have been famously unenthusiastic about playing host, based on repeated opinion polls. The declaration of a fourth state of emergency in Tokyo last month for the duration of the Games further incited anti-Olympic sentiment.

Nevertheless, although organizers barred spectators from Olympic venues, Team Japan's success in the first week of competition has given rise to watch parties in homes and in public.

Even before Japan raced to the top of the medal table, the Olympics were giving people reasons to mingle. On the day of the opening ceremony, crowds swarmed the grounds of the National Stadium to watch an exhibition by Blue Impulse, the Japan Self-Defense Force's aerobatic squadron.

People also congregated around the Tokyo waterfront to observe and photograph the Olympic cauldron, triggering a warning from organizers last weekend.

Organizers insist the Olympic Village bubble has held, touting a 0.02% positive rate out of nearly 350,000 tests of athletes, officials, sponsors and media. The International Olympic Committee has said nearly 100% of officials and athletes are vaccinated. In daily briefings, spokesperson Mark Adams has reiterated the stringent testing regimen.

"As far as I know there are no infections spreading to the Japanese public from the Olympic movement," Adams said on Thursday. 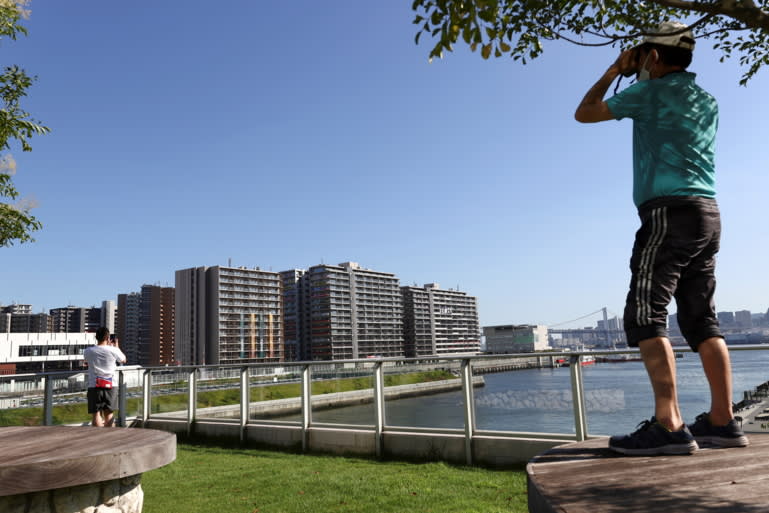 A man uses binoculars to peek into the Olympic Village. The area's COVID-19 bubble appears to be holding, according to officials.   © Reuters

Over half of the 220 Olympic-related cases, however, are residents of Japan. While non-residents are immediately placed in a 14-day quarantine, residents are allowed to isolate at home. Athletes have a tight schedule of entering Japan only five days before and leaving within 48 hours after their competitions, but local staff, media and about 70,000 volunteers have been free to commute on public transportation.

Virtually none of the Olympic-related cases have burdened Japan's public health system, organizers stress. "I am confident that the Olympics are being run without affecting hospital provision," said International Olympic Committee chief medical officer Richard Budgett.

Half of the infected personnel have been cared for by medical teams from their own national committees or sports federations, while the rest were treated in the Olympic clinic, Budgett said.

Only two Olympic-related individuals are hospitalized with COVID-19 outside of the bubble, Reuters reported citing organizers, who said neither case is serious.

Meanwhile, Japan's burden of severe COVID-19 cases has shifted from the increasingly vaccinated elderly to the middle-aged. People aged 40-50 now account for half of severe cases, while the 20-30 age group still comprises half of total infections. Tokyo reported 88 severe cases on Friday, up by seven from the previous day.