Japan's bid to save Olympics has an air of desperation TOKYO -- When IOC senior member Dick Pound told reporters last Wednesday that the coronavirus epidemic might lead to the Tokyo Olympics being canceled, he likely did not expect his words to trigger the closure of Japan's schools.

"So many people spent six years preparing for this event," Yoshiro Mori, president of the Tokyo 2020 organizing committee, responded. Before the outbreak, organizers were busy solving late-arriving problems, such as relocating marathons to Hokkaido to save athletes from Tokyo's punishingly hot summer temperatures.

"We would stake our lives to make sure it happens," added Mori, an octogenarian former prime minister.

But the burden of saving Tokyo's much anticipated Olympics ultimately fell on Prime Minister Shinzo Abe, who on Feb. 27 called for the nation's schools to take an early and extended spring break. Abe's request surprised his advisers, worried parents, confused businesses and disrupted academic schedules.

"The health and safety of Japan's children is of paramount importance," Abe said on Saturday, in a rare weekend press briefing. "The two weeks ahead will be very important to contain the outbreak of infections in Japan." 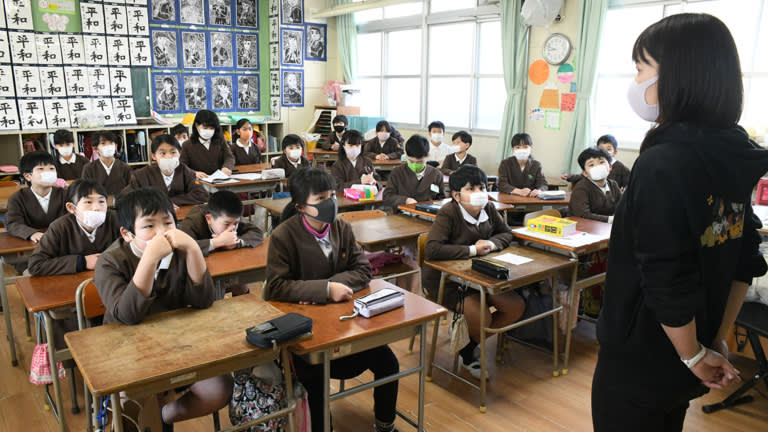 Schoolchildren in Osaka listen to an announcement that their spring vacations will start immediately, two weeks earlier than usual, on Feb. 28, 2020.

Two days later, the line was echoed by Abe's medical advisers. Experts, however, had to scramble to come up with a scientific rationale for the rash decision.

"There are so many unknowns in the science," said Dr. Hiroyuki Noda, medical councilor for the Cabinet Secretariat. "When transmission becomes wider spread, it is better to say we did all we could."

The prime minister has claimed sole responsibility. "It was a political decision," Abe said. Koichi Hagiuda, the minister of education and a close aide to Abe, told parliament that he was not consulted. Nor was the panel of physicians and epidemiologists assembled to advise the prime minister on the coronavirus.

"We didn't know it was going to happen," one expert told the Nikkei Asian Review. "If we thought it was a good idea, we would have suggested it" as part of the basic policy adopted by the government last week. Instead, the panel requested the cancellation of public gatherings and advised people to remain at home if they feel ill. "It was a political PR move," said Koichi Nakano, professor of political science at Sophia University. "If the revenues expected in relation to the Olympics don't come in despite all of the infrastructure investment, that would be catastrophic for the Japanese economy."

Analysts at Goldman Sachs estimated in a Friday report that cancelling the Olympics would net a loss of 800 billion yen ($7.6 billion) for Japan’s economy, lowering its 2020 growth forecast to -2.0%.

The school closures request provided instant, albeit fleeting, relief for Abe. On Feb. 28, the day after Abe asked that schools be closed, International Olympic Committee President Thomas Bach told reporters that the IOC is "fully committed" to opening the Tokyo Games as scheduled on July 24.

"We have never discussed canceling the Games," a spokesperson for the organizing committee told Nikkei. "Preparation for the games are continuing as planned." The spokesperson also said that the committee has set up a task force of medical experts who are discussing specific measures to safeguard the Olympics.

Cabinet health officials were asked on Monday if they were limiting coronavirus tests to keep the official number of confirmed cases down.

"Originally there was a limit on test capacity," said Dr. Yasuyuki Sahara, senior assistant minister for global health at the Ministry of Health, Labor and Welfare. "We had to prioritize so only the people in dire need were given the test. But the capacity has been raised so now tests will be conducted at the discretion of the physician." 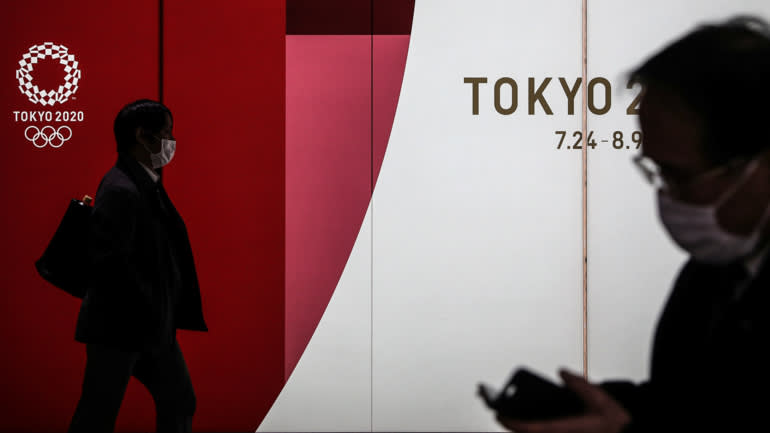 A billboard near Tokyo's Shinjuku station. Before the Olympics begin on July 24, Japanese leaders want to make their country into "a role model" for virus containment.   © Reuters

Japan's official tally reached 1,000 on Tuesday. The figure includes more than 700 who were infected aboard the Diamond Princess cruise ship. Otherwise, Japan's largest cluster of cases is in Hokkaido, where 90 infections have been confirmed as of Friday.

The outbreak led the governor of the prefecture that will host Olympic marathon runners to declare a state of emergency.

“If Japan looked like the role model for containment, then they could say Japan is a safe place to host the Olympics,” but “Abe really blew it with the Diamond Princess,” said Sophia University’s Nakano.

"But Abe really blew it with the Diamond Princess."

Health officials say that if the virus continues to spread, Abe may declare a nationwide state of emergency, which would require a change in the special measures law for infectious diseases.

The law currently allows for such a declaration only for unknown infectious diseases.