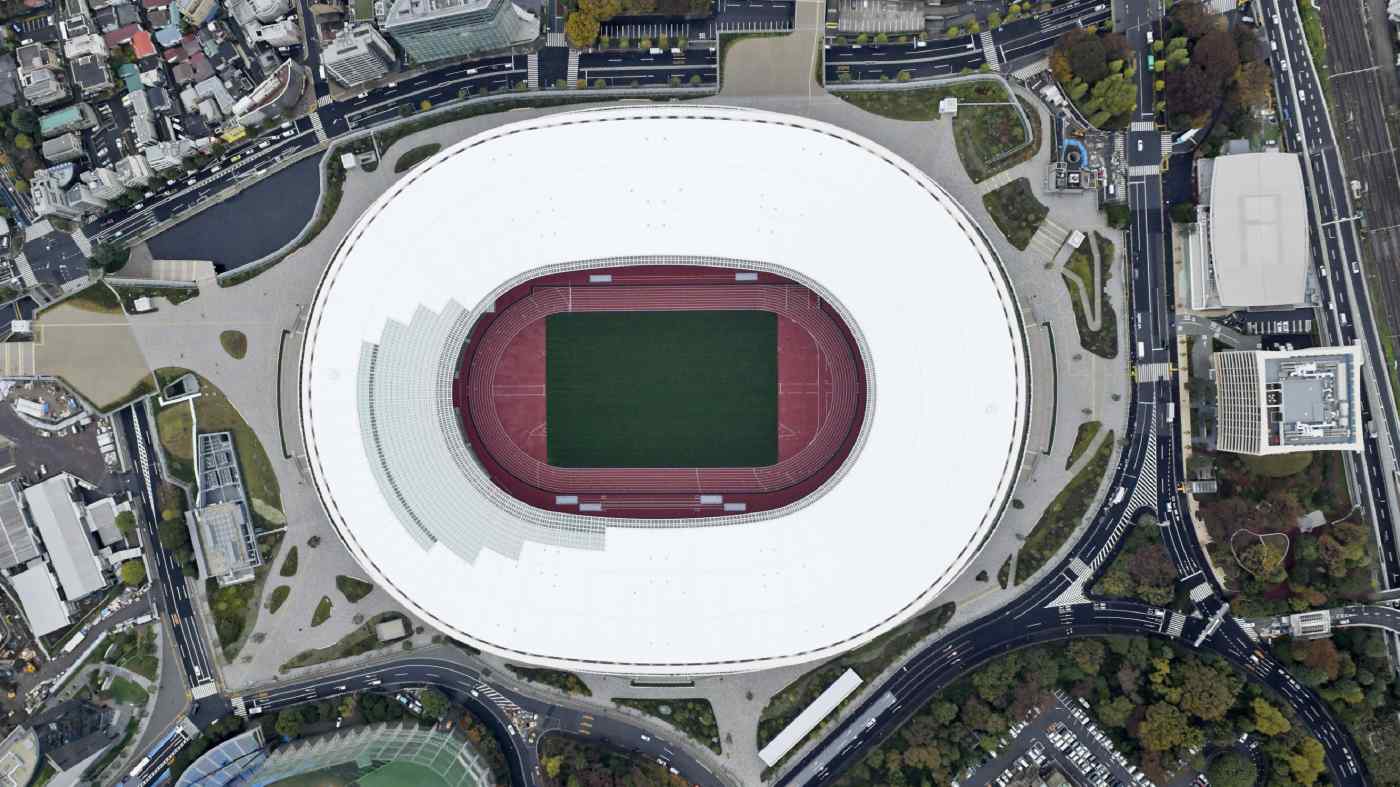 TOKYO -- Construction of Japan's new National Stadium, the main venue for the 2020 Summer Olympics and Paralympics, is finished and the facility will be formally handed over to its owner on Saturday. The multipurpose stadium took three years to build and is located in Tokyo's Meiji Jingu Gaien district.

The three-story structure has a wood and steel frame, with the lumber sourced from across Japan. It is designed to let in as much wind as possible to provide natural cooling. This is done using eave-like elements inspired by traditional Japanese architecture. The eco-friendly design is meant to embody the spirit of modern spectator sports.

The stadium was designed by a team led by celebrated Japanese architect Kengo Kuma; the lead contractor is construction giant Taisei. The Japan Sport Council, the operator of the project, will take possession of the stadium on Saturday.

The stands will hold 60,000 seats for the Olympics and 58,000 seats for the Paralympics. Designed as a continuous oval bowl, with three tiers of seats sloped at a progressively steeper angle, the structure looks more like a European soccer stadium than any other multipurpose sports venue in Japan. This design ensures that even people sitting in the upper decks can feel the energy of the on-field action.

Gigantic eaves attached to the base of the roof play a crucial role in keeping the stadium cool. The spacing between the vertical lattices vary according to seasonal differences in wind direction. In summer, for instance, southerly winds flow into the stands through narrower lattices facing that direction. Some of the airflow is directed upward, pulling heat away from the ground and helping to lower the temperature and humidity in the stadium.

Under the eaves are nokibisashi, small roofs made of wood from all 47 of Japan's prefectures. These jut out from the perimeter, allowing breezes onto the concourse. Such layered eaves are seen in traditional Japanese architecture, such as five-story pagodas. The seating areas do not have air conditioning, relying instead on 185 fans to create cool air currents on days when the winds are calm.

Huge amounts of domestically grown larch and cedar are also used for the roof, which covers the seating sections and areas near the running track.

Another key feature of the stadium is its "universal design," which creates spaces that meet the needs of all kinds of people, including the physically disabled.

There will be 500 seats available for wheelchair users during the Olympics and 750 for the Paralympics. Elevators installed behind these seats can carry spectators to upper parts of the stands, so that physically disabled people can watch events from wheelchair-ready seats located higher in the stadium than is typical.

Construction of the facility began in December 2016. In all, 1.5 million workers helped to build it. The total cost of construction, including related work, came to 156.9 billion yen ($1.43 billion). The project came in under its 159 billion yen budget set in 2015, despite rising material and labor costs.

A ceremony marking the opening of the stadium will be held on Dec. 21 featuring performances from Usain Bolt -- a retired Jamaican sprinter, and the world record holder in the men's 100-meter and 200-meter dash -- and Japanese pop group Arashi. The Emperor's Cup soccer final will be the first sporting event to be held at the stadium on New Year's Day.