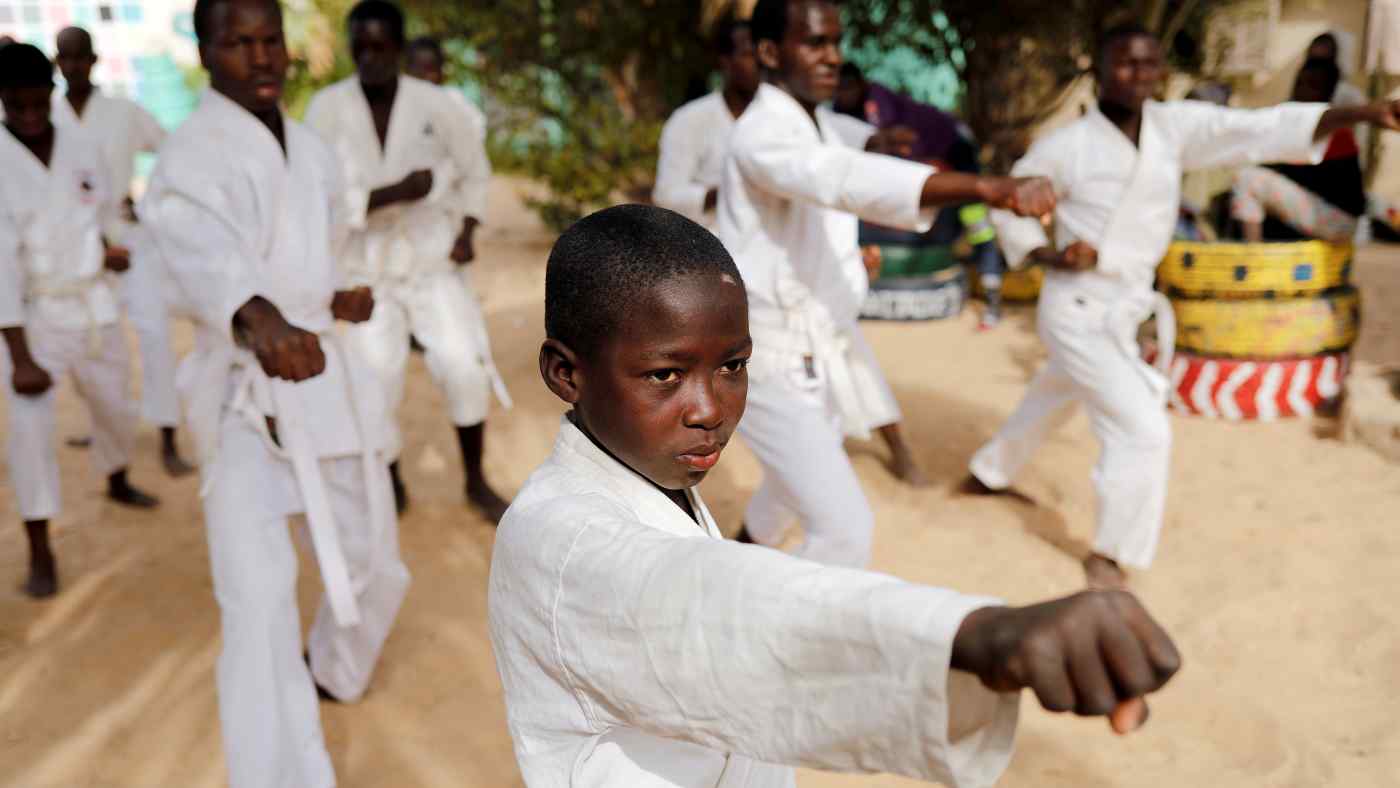 Karate is gaining popularity around the world in countries such as Senegal, where local karate trainees are seen practicing in December.   © Reuters
DAISHI CHIBA, Nikkei staff writerMarch 21, 2020 12:20 JST | Japan
CopyCopied

TOKYO -- The Tokyo Olympics and Paralympics have been generating a wave of international interest in Japanese budo traditional martial arts, which are often said to encapsulate the nation's values and spirituality.

The 2020 Games, now cast in uncertainty due to the coronavirus pandemic, have put the spotlight especially on karate, which will make its Olympic debut this year.

Meanwhile, along with karate, budo such as judo and aikido are inspiring overseas artists and attracting foreign media attention.

Adam Vidiksis, a composer and technologist based in Philadelphia, is creating original, digital technology-based artistic performances inspired by karate. He is currently involved in a collaborative project designed to translate the "kata" patterns of movement used in karate into expressions through digital music.

On the night of Feb. 4, an event to stage various artistic performances created by U.S. and Japanese artists including Vidiksis was held at the U.S. Embassy in Tokyo.

Vidiksis talked about his approach to expressing karate's kata through music. He started by asking some "karateka" experts to perform kata with sensors attached to various parts of their bodies. The sensors detect changes in their brain waves and follow their bodily movements as they perform the kata. He then uses a special program he has developed to convert the data collected by the sensors into electronic sounds.

Vidiksis composes music and creates performances by using these sounds and kata movements in collaboration with players of Japanese traditional musical instruments like the shakuhachi, a five-holed vertical bamboo flute, and the samisen, a three-stringed banjo-like instrument.

His goal is to create a masterpiece that combines Japanese and American music. The composition will be performed at a concert hall in Tokyo during the Olympics. Foreign tourists practice karate on the beach in Okinawa, the birthplace of the martial art. (Photo Courtesy of Ageshio Japan)

Vidiksis says he was first drawn to budo because it helps him enter a state of meditation, which is widely practiced in the U.S. as a way to reduce stress and boost concentration.

To many Americans, karate is more than just a martial art, according to Vidiksis. It is known in the U.S. also as a tool for spiritual training, and it is one of the things American children are most enthusiastic about at the moment, he says.

The film spawned several sequels, remakes and television series, and in January 2020 it was announced that The Karate Kid would be adapted into a Broadway musical.

Okinawa, where parts of the series are set, is the birthplace of karate and seen as its mecca.

On Okinawa's sandy beaches, groups of foreign tourists wearing white uniforms are often spotted practicing karate. They are participants in "karate tours" offering experiences in the island where the martial art was born.

Ageshio Japan, a travel agent based in Naha, Okinawa Prefecture's capital, has been organizing the tours since March 2018.

Many of the participants are tourists from the U.S. and Europe. Keiichi Furuta, Ageshio Japan's chief operating officer, says the company's karate tours are attracting growing ranks of foreign visitors to the country. The firm's sales in fiscal 2019, which runs through March, are expected to have more than tripled from the previous year, according to Furuta.

Since karate was officially added to the 2020 Olympics program, the travel agent has been receiving an increasing number of inquiries from Chinese interested in learning the art, according to Furuta.

Many of the inquiries have been from practitioners who teach other martial arts such as taekwondo in China and want to add karate to their repertoires. Japanese female sumo wrestler Hiyori Kon was chosen as one of the BBC's 100 Women 2019.

The number of foreign visitors to Okinawa edged up 1% in 2019 from the previous year to 2.93 million, according to statistics released by the prefectural government. Karate tourism is expected to boost growth in foreign tourist traffic to Japan's southernmost prefecture.

Karate is not the only Japanese martial art attracting international attention. Women's sumo wrestling, which is no more popular than an obscure sport such as kabaddi in Japan, recently grabbed the foreign media spotlight when the BBC picked amateur sumo champion Hiyori Kon to feature in its "100 Women 2019" list.

Kon was a fourth-year student at Kyoto's Ritsumeikan University when she became the subject of a BBC story about how she is trying to "change the rules of one of the world's oldest sports, and give a voice to women" in the sumo world, which is known for its tradition of barring women from competing professionally.

After she was chosen for the BBC's list of 100 influential and inspirational women in the world for 2019, Kon said she was "fighting against various fixed ideas in the field of women's sumo" in a comment published on the university's website.

Kon was also featured in Little Miss Sumo, a 2018 documentary film about her battle against sumo's male-oriented culture which won the Best U.K. Film award at the Manchester Film Festival. The film is a sign of growing international interest in the ancient Japanese sport, especially women's sumo.

The word "budo" has yet to gain wide international recognition, however. The Oxford Advanced Learner's Dictionary, a widely used English language dictionary, does not include the word, for instance, although it does contains "bushido," the word for the samurai class' code of conduct.

But the Olympics could yet serve as a springboard for budo to enter the global lexicon of sports.