Naomi Osaka was cruising towards a gold medal at the Tokyo Olympics before being knocked out in the third round.   © Reuters
MASAKO HARA, Nikkei staff writerJuly 28, 2021 21:40 JST | Japan
CopyCopied

TOKYO -- Few athletes are lucky enough to see an Olympics held at home once in their lifetime, and only a handful have ever been in a position to compete in the Games, let alone win a medal.

Japan's tennis star Naomi Osaka is one of the fortunate and was favored to win it all before her shocking loss in the third round at the Tokyo Olympics. It was likely one of the titles she wanted most.

"For me, I just feel like I [want to] break history or make history," she told Nikkei in an interview last year. "When someone says to me, 'No one has done this before,' that immediately becomes my goal."

The daughter of a Japanese mother and Haitian father, Osaka chose Japanese citizenship in 2019. "I always represent Japan when I play," Osaka said in the interview, adding that the Olympics "are definitely one of the biggest group [sporting] events. I have never played in them before."

Osaka was not able to participate in the 2016 Olympics in Rio de Janeiro because her ranking was slightly too low. After that, she made no secret of her ambition to win gold at the Tokyo Games.

Matches at the Games are being held on hard courts, which perfectly suited her playing style. She was overwhelming in the first and second rounds, and knew she was playing well.

But Osaka suffered a surprise defeat in the third round at the hands Marketa Vondrousova of the Czech Republic, the world's 42-ranked player. The loss reminded Osaka of when she would make mistakes because of her inability to control her feelings, at times leading to defeats. The fact that it was the first match between the players, and they did not know each other's styles, may also have contributed to her downfall. 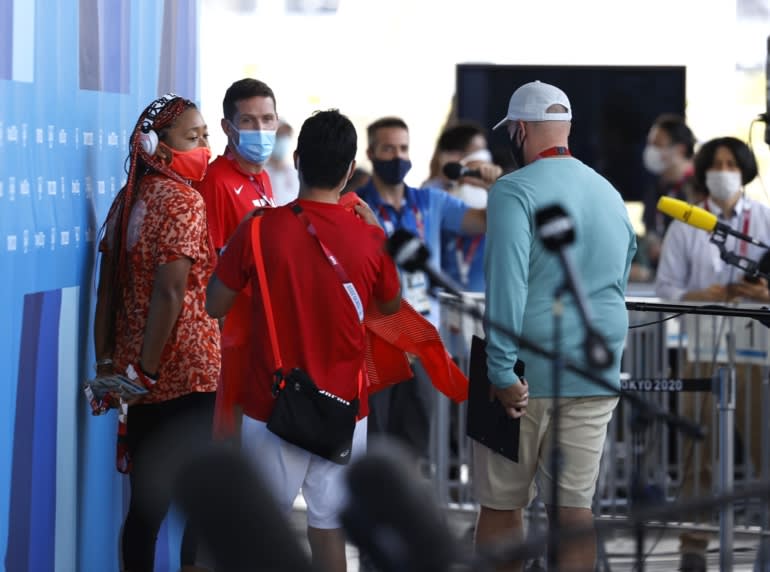 After losing in the third round, Osaka, left, returned to the venue later in the day to give interviews.    © Kyodo

Underdogs competing against top players arguably do not have as much to lose as their opponents. They can be more aggressive and not fear mistakes. But the pressure on those in the top ranks never lets up because the stakes in every game are higher.

Tennis players' home countries matter little in the world tour because the qualification process is based on their individual abilities, not their nationality.  So when athletes do come to represent their country at the Olympics -- not just themselves -- the pressure ramps up significantly. The hopes of the entire nation rest on their shoulders, and the weight of collective expectation and hope can be overwhelming.

That was true for Ashleigh Barty of Australia, the world's top seed and reigning Wimbledon champion. She lost in the first round of the Tokyo Games. Serbia's Novak Djokovic also has never won a gold medal in singles play.

"I do know that my expectations were a lot higher," said Osaka. "I'm disappointed in every loss, but I feel like this one sucks more than the others."

After winning the first round of the French Open, Osaka withdrew from the tournament, citing "mental health issues." She announced that she would not participate in Wimbledon but was much more positive about the Olympics.

From Paris, she visited her parents in Florida rather than return to her own home in Los Angeles in order to spend time with family and regroup before the Olympics.

She attended the ESPY Awards, hosted by sports network ESPN, to receive the award for best athlete in women's sports. Even though her first game back was in the Olympics, she said the long rest was not a problem. It looked as if she was mentally back on her feet.

When she served as the final torchbearer to light the Olympic flame, she wrote on social media that it was "undoubtedly the greatest athletic achievement and honor" of her life. She was still moved by the experience the next day. If she had won gold, she would have been only the second person to do so after lighting the Olympic cauldron since Cathy Freeman achieved the feat at the 2000 Sydney Olympics by winning the women's 400m.

But Osaka may have been looking too far ahead, adding to the pressure.

The night after her defeat, she posted on social media that she was sorry not to have met expectations, and that she would continue to cheer on the other Japanese athletes and make every effort to participate in the next Olympics.

Next week the professional tennis tour starts again and it will be her favorite hard court season in the U.S. Perhaps a win or two could help ease the pain of her crushing defeat at the Olympics, if only a little.