Pros and cons of holding the Tokyo Olympics during a pandemic 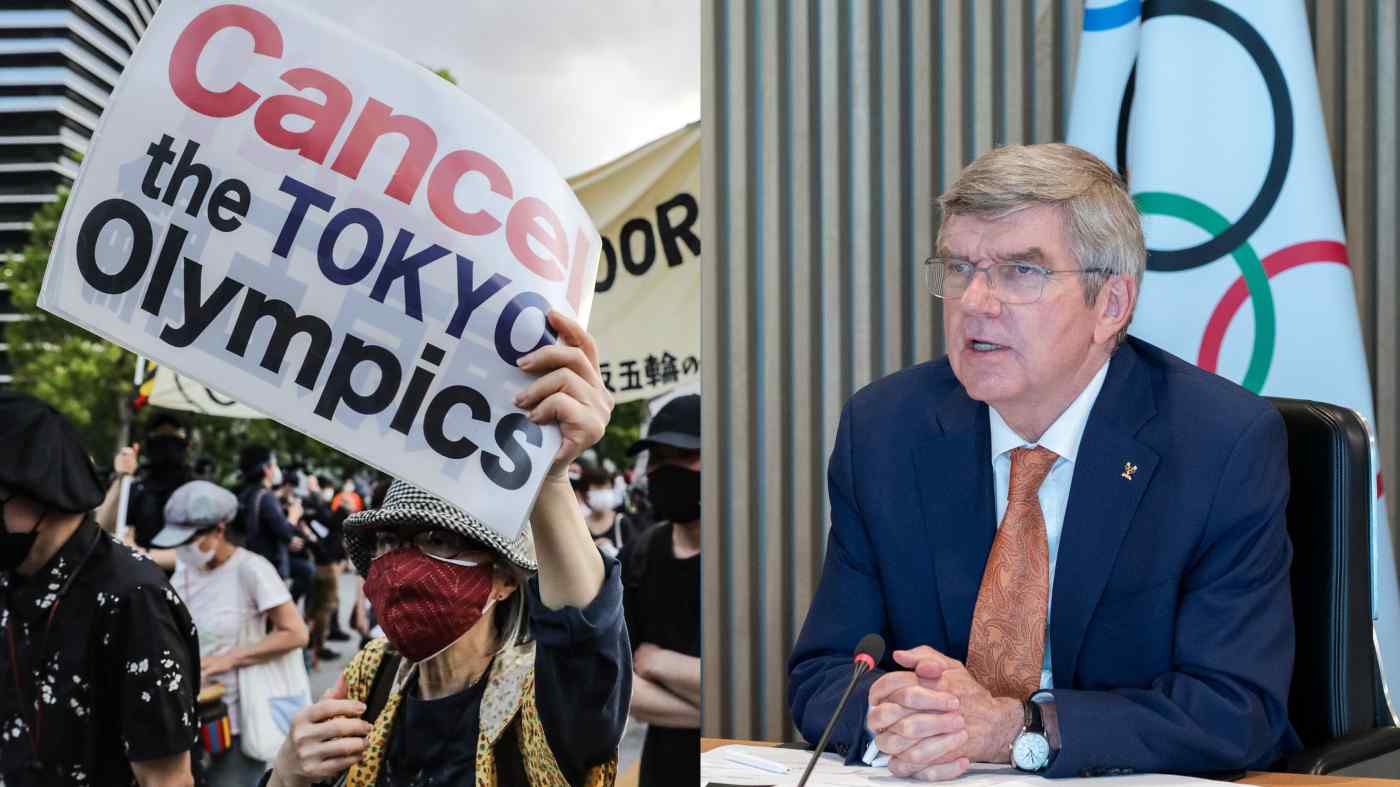 TOKYO -- International Olympic Committee President Thomas Bach was supposed to have been the guest of honor at the torch relay in Hiroshima prefecture this week.

But Hiroshima joined Tokyo and seven other prefectures in a COVID state of emergency on Sunday. Aware of potential negative press, Japanese officials asked Bach to postpone his trip.

Organizers insist the Olympics can be held in a "safe and secure" manner, but domestic opposition is strong.

Fearing the strain on local health infrastructure, Japan's biggest medical workers union is pressing for cancellation. More than 80% of respondents to an Asahi poll this week want the Games either postponed or scrapped, and an online petition calling for cancellation led by Kenji Utsunomiya, a lawyer who has run for Tokyo governor, has gained nearly 350,000 signatures in two weeks.

However, some public health experts say that rather than becoming a superspreader event, Olympics venues may be the safest place in Japan come July, given the likely high rate of vaccination among athletes -- not a requirement to compete -- and stringent COVID countermeasures.

"The fact that it's the summer games, it's outdoors, they're limiting who's coming -- all of that can minimize risk," said Amesh Adalja at the Center for Health Security in Johns Hopkins University.

Tokyo 2020 organizers made an unprecedented call in March to ban spectators from overseas and place a cap on team and sponsor delegations. The public, however, is not convinced. The vaccine rollout in Japan has been slow, and some 60,000 athletes, officials, support staff, media and sponsors will still be coming to the country.

Adalja said that domestic spectators planning to attend the games are not at risk from the athletes, but from one another.

"It's extremely rare for people who are vaccinated to transmit based on the data we've seen from countries like Israel and clinical trials," Adalja said. "I don't know how going to the Olympic Village has a higher risk than a Tokyo market."

Upon entry, Olympic arrivals will be required to submit two negative tests, a detailed activity plan and a written pledge to abide by it. Athletes and officials will be tested daily and banned from public transport in principle, while media will be allowed on trains and buses after a 14-day quarantine.

"If they can cut contact with locals, it is unlikely that they spread the virus in Japan," said Nobuhiko Okabe of the Kawasaki Institute of Public Health, and a member of a panel of experts advising Tokyo 2020 on COVID countermeasures.

"The real challenge is how the rules will be complied with by other stakeholders and media," Okabe said.

Four test events held in early May for diving, volleyball, athletics and marathon yielded zero positive COVID tests, the organizers said. No local infections were reported as more than 700 athletes and 6,000 staff from Japan and overseas complied with daily testing and activity restrictions. One positive case was caught and isolated upon arrival into the country.

"If you look at all the qualification events for Olympic athletes, they are moving from one place to the next and still manage to remain safe and follow protocols," said Heather Dichter, a sports historian at De Monfort University. "The athletes are committed to following the protocols because they desperately want to compete." But given the unparalleled scale of the Olympics, even a couple of Japan's most prominent athletes have voiced skepticism.

"It's 10,000 people in a Village, playing a tournament. I don't think it's easy, especially (with) what's happening right now in Japan," said tennis player Kei Nishikori. "Given the number of deaths, I don't think the Olympics are worth risking people's lives."

Tennis champion Naomi Osaka has been cautiously optimistic. "Of course I would say I want the Olympics to happen," she said.

"A lot of unexpected things have happened and if it's putting people at risk, and if it's making people very uncomfortable, then it definitely should be a discussion, which I think it is as of right now," Osaka added.

Two of corporate Japan's most outspoken executives, Masayoshi Son of SoftBank Group and Hiroshi Mikitani of Rakuten, have publicly expressed fears. Son said he is "afraid of having the Olympics," while Mikitani called the games a "suicide mission" in an interview with CNN last week.

Neither company is an Olympic sponsor, and none of Tokyo 2020's official backers have called for cancellation.

And while Prime Minister Yoshihide Suga insists that the games can be held safely, Yukio Edano, head of the main opposition Constitutional Democratic Party of Japan, said in parliament it is "impossible" to hold the games while protecting people's lives and health.

"Medical care breakdown is actually happening in Japan. We don't want an extra burden from the Olympics on the medical system," Susumu Morita, secretary-general of the Federation of Medical Workers' Unions, told Nikkei Asia. Japan's Kei Nishikori in action during the Italian Open in Rome on May 13. "Given the number of deaths, I don't think the Olympics are worth risking people's lives," the tennis star said recently.   © Reuters

Olympic organizers are calling for 500 nurses and 200 sports doctors to staff the games, as well as securing beds for athletes in around 30 hospitals in the Tokyo area. Kazuhiko Oigawa, governor of neighboring Ibaraki prefecture, declined to reserve local hospital beds for athletes over its own residents.

While athletes will be tested daily on Tokyo 2020s expense, a survey conducted by the union in March found that only 9.8% of hospitals conduct regular PCR tests for their workers.

"Now is the time to put all our efforts into containing the virus. We cannot spare our labor for the Olympics," Morita said, adding that the government should make an immediate decision to cancel the games.

But public opinion appears unable to sway Japan's public and private sectors, which have invested seven years and over $24 billion in the Olympics. Triggering a cancellation would make Japan liable for repaying the International Olympic Committee.

Nor will the trigger be pulled by the IOC, who would have to repay broadcasters and sponsors.

"That puts a huge burden on sports globally because a huge amount of money would not be dispersed to the national governing bodies across the world who are really struggling financially," said Dichter. "They rely on income from the Olympic Games."

There are also political factors. Suga needs to boost his approval rating, which has fallen to new lows in recent polls, ahead of a leadership election of the ruling Liberal Democratic Party this autumn.

Bach has no such concerns. He will remain at the head of the Olympic movement until 2025, after being reelected without contest in March.

For the IOC, the ballooning financial and public health costs on Tokyo "has a significant amount of PR damage," said Dichter.

"But the Olympic movement has been fairly resilient with surviving a variety of scandals and politics over the decades and it has continued to survive."