SEOUL -- The uncertainty over this summer's Tokyo Olympics has an extra urgency for South Korean athletes. For many of the 200 or so Olympians who will make the short trip east to the Japanese capital, a medal is not the only prize available.

All able-bodied South Korean males are required to start their 20-month military service by the time they reach 28 but they can receive exemption if they collect a medal at the Olympics. The rule came into effect in 1973, when the government was looking to boost the country's global prestige.

"With conscripts making up the bulk of South Korea's 590,000-strong army, the issue of exemption is a sensitive one. It is not longer common for the media to publicly discuss exemptions for specific players or athletes, except for Son Heung-min and BTS," Seo Hyung-wook, soccer commentator for national television network MBC, told Nikkei Asia. "Exemption is a very important issue however."

BTS, a leading K-Pop boy band, has tens of millions of fans around the world and as Jin and Suga, two of the seven members, approached their 28th birthdays in 2020, there was huge interest, as pop stars are not included on the exemption list.

In the end, the duo did not have to cut their hair and report to their nearest military base. In December they received a reprieve by politicians who decided that leading pop stars were able, thanks to a new law, to defer their start for two years. Democratic Party member Jeon Yong-gi explained the reasoning. "For the sake of fairness, we are not talking about exempting them from their duty," Jeon said. "But pop musicians and artists like BTS can see their careers blossom in their 20s. We cannot let military duty block their way at the height of their careers."

BTS contributes over $4 billion to South Korea's economy every year and also increases the country's soft power, according to Lee Geun, president of the Korea Foundation. "When foreigners watch BTS perform, they see the innovativeness of Korea. They see how modern Korean society is. When we are successful in conveying and creating such images abroad, the Korean government gets a lot of benefit."

The members of BTS are well aware of this. "I think the country sort of told me, 'You're doing this well, and we will give you a little bit more time'," Jin told Rolling Stone magazine. "It's an important duty for our country, so I will work as hard as I can and do the most I can until I am called up."

While pop stars can receive deferral, their sporting counterparts have the opportunity to receive an exemption so that they only have to complete a basic three weeks of training.

"If you are a pop star you can start again after military service, especially as the length of duty is shorter than it used to be, but in soccer it can have a big impact on your career," said Kim Hyun-ki, a soccer agent. 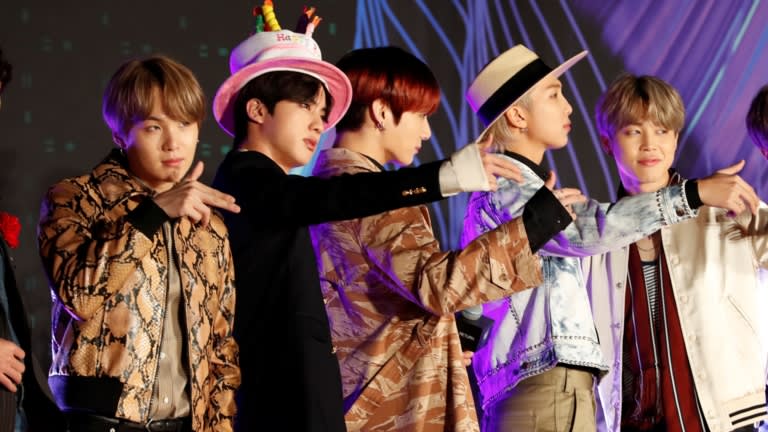 Members of BTS gesture to a camera on the red carpet during the annual MAMA Awards at Nagoya Dome in Nagoya, Japan, on Dec. 4, 2019.   © Reuters

There are numerous soccer leagues in Europe and elsewhere that offer high salaries and an international profile. The career peak of a player in the sport is usually 27 or 28, with decline setting in after 30. Players with military service looming may never get the chance to go to Europe or have to return home early, with little prospect of returning once they complete their military duty.

The biggest case in recent years was that of Son Heung-min. Son joined Tottenham Hotspur from Germany's Bayer Leverkusen in 2015 for a transfer fee reported to be around $32 million. The Korean quickly established himself in England but as he was turning 28 in 2020, the club and the Korean Football Association worked together to get Son as many exemption chances as possible.

The forward was named one of three overage players allowed in the 2016 Olympics, but South Korea was eliminated in the last eight. That meant Tottenham and Son had another chance at the 2018 Asian Games. The club allowed Son to miss part of the English Premier League season and leave London for Indonesia. South Korea won gold and Son and his team mates received exemptions from military service.

The 28-year-old is now one of the biggest names in the Premier League and reportedly earns over $10 million a year. In December, the South Korean government estimated that his impact on the nation's economy was worth around $1.8 billion and on June 23 he was named the face of Ralph Lauren's 2021 ad campaign supporting its role as official outfitter of the Wimbledon tennis tournament in London. Without the exemption, Son would now be in South Korea earning approximately $480 a month.

Seo Hyung-wook believes such numbers reflect changing attitudes to exemption, with the service itself shorter, less arduous and perhaps less of a career barrier than before. In addition, when the rule was introduced in 1973, Korea won one silver medal at the Olympics the previous year. By 2012, the country was fifth in the medal rankings with 13 golds out of a total of 30 medals.

"More people than before believe that exemption should stop," Seo said. "Most think military service is not a punishment but an obligation. But exemptions for elite sports persons or artists means that people regard exemption more as a reward and actually having to do the service as a punishment."

Following the 2018 Asian Games and the controversy surrounding Son, the Korean government said it would look again at the exemption issue. "We're planning a comprehensive re-examination of the system in the areas of sport and art," said Ki Chan-soo, commissioner of the Military Manpower Administration. "We're already running short of military personnel resources so we'll start by looking into whether the exemption program is fair."

Attitudes regarding the very concept of conscription are also changing. A Gallup Korea poll in May showed for the first time that more people 43% to 42%, prefer a volunteer army rather than a conscripted one. There is also talk of expanding conscription to women.

These are issues that will continue to be debated, but this summer in Tokyo, a new generation of Korean soccer stars have two big prizes -- a medal and an exemption -- within reach.