Spending on Olympic medals pays off in swimming and track TOKYO -- Countries typically splurge on their athletic teams to win medals at the Olympics. But how has this improved their athlete's performance?

An analysis involving investment by governments and Olympic-related bodies and the number of medals won shows that money spent on track and field, swimming and similar sports is the best way to get a return in medals, as opposed to other events.

Based on the results of the 2016 Olympic Games in Rio de Janeiro, the analysis looked at Japan, the U.S., Britain, Australia and Canada, as they all release data on spending to improve the performance of athletes.

The cost of winning was calculated by dividing public support -- including funds given by its government and National Olympic Committee -- for each sport and association in the four years till the Rio Games by the number of medals earned. The definition of public support differs between countries, but an approximate metric was obtained for this study.

The analysis showed that winning medals cost more in rugby, football and other team sports than individual competitions, or those involving a small number of athletes, such as swimming and track and field.

At the Rio games, 48 medals were awarded in team sports, compared to 925 in other sports. In track and field, which involved the largest number of 141 medals, the relative ease in improving individual performance as opposed to an entire team makes it possible to win more medals easily.

Facilities and equipment are also connected to cost-efficiency. Sailing and rowing were costly as they require special gear. Outdoor sports -- excluding track and field -- were also expensive. In contrast, costs were low in indoor sports such as gymnastics, which uses commonly available equipment. A comparison of sports having a low cost of earning medals highlights each country's specialty. Britain, which won 67 medals, earned those at a low cost in gymnastics, shooting and cycling. Jason Kenny, who won gold medals and silver medalist Becky James, contributed to the country's 12 medals.

According to UK Sport, the country spent a total of 274.46 million pounds ($376 million) on British athletes at the Rio Games. This included 30.26 million pounds for cycling, the second-largest allocation after rowing. In other words, 2.52 million pounds were needed to win a medal in cycling, one-sixth the amount needed by hockey, which was the costliest sport in terms of winning a medal.

While Canada won 22 medals, the cost of earning medals was low in swimming, track and field and gymnastics. Swimming accounted for six medals, as did track and field. They marked the greatest number among competitions in which Canada participated, and were led by Penny Oleksiak, who received medals in the women's 100-meter freestyle and three other events.

Canada spent 2.24 million Canadian dollars ($1.76 million) to win each medal in swimming, according to Own The Podium, an organization responsible for helping Canadian athletes win. The country spent CA$116.6 million in Rio, with swimming receiving the second-biggest appropriation of CA$13.44 million after rowing. 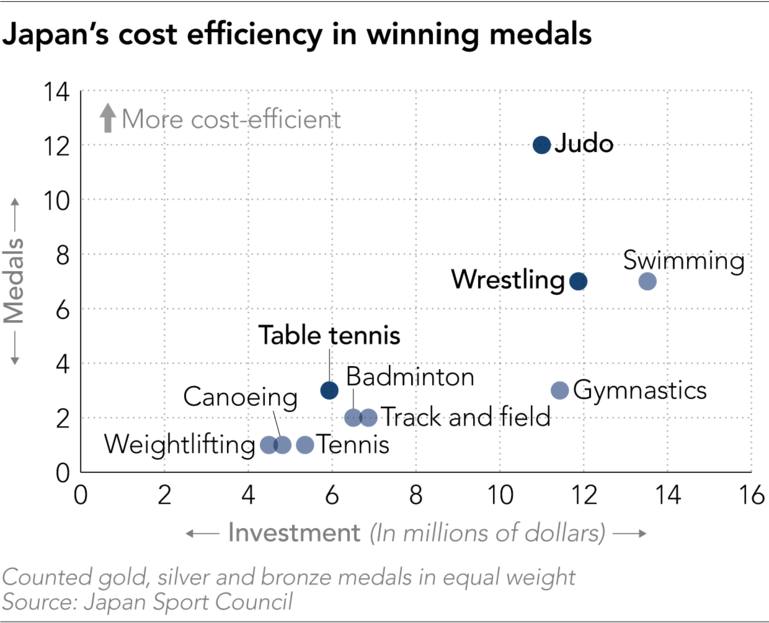 Nikkei also analyzed Japanese, U.S. and Australian data on funds provided to sports organizations. While Japan earned 41 medals in Rio, the cost of medals in judo was markedly lower than in other sports. Japan won 12 medals in judo, starting with Ami Kondo, who earned the first medal for the country. Japanese judokas received 20% of the 56 medals allocated to the sport.

An analysis of data provided by the Japan Sport Council, an independent administrative agency, shows that the cost of winning a medal in judo was about 100 million yen ($913,600) per medal.

While the U.S. was the No. 1 winner of medals with 121, the cost of earning them was low in swimming and track and field as well as tennis, golf and fencing. Receiving a total of 11 medals, Michael Phelps and Katie Ledecky contributed to the U.S. tally of 33, the largest number among sports in which American athletes competed. Based on data provided by the U.S. Olympic and Paralympic Committee, the cost of winning each swimming medal was around $400,000. 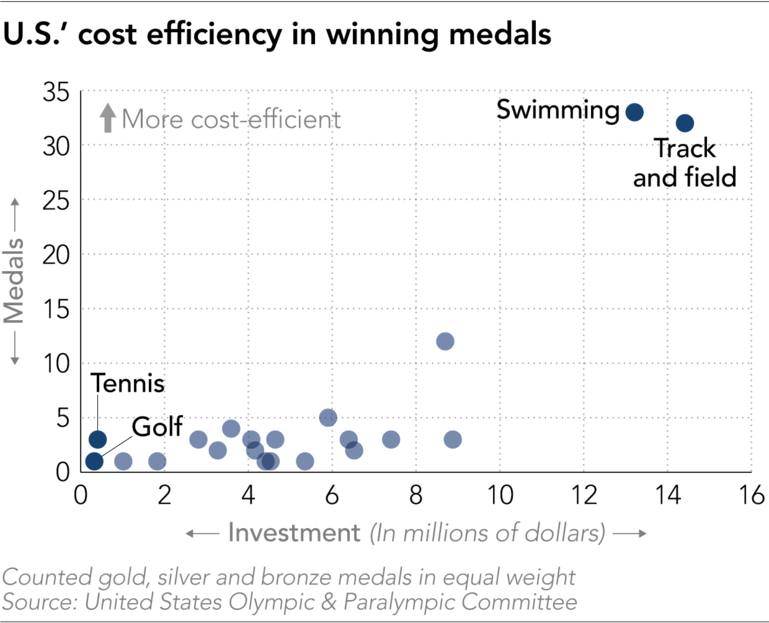 For Australia, the cost was low in swimming and modern pentathlon. Chloe Esposito won the women's modern pentathlon by setting a new Olympic record at a cost of 190,000 Australian dollars ($139,600), according to an analysis of data released by the Australian Sports Commission.

Funds spent on the Tokyo Games are different than those for Rio. Britain reduced expenditures nearly 20% for cycling, which accounted for 12 medals in Rio, the largest among competitions in which the nation participated. At the same time, it boosted spending on shooting, which earned two medals, by 50%.

Amber Hill ranked first in the women's skeet shooting and is expected to be in the running again in Tokyo.

Canada increased spending on a broad range of sports, with golf receiving over a tenfold increase.

Japan increased spending roughly by 30% for basketball while doubling funds for karate, which will make its Olympic debut in Tokyo. Rui Hachimura, a Japanese professional basketball player for the Washington Wizards in the U.S., is expected to play in Tokyo. With karate scheduled for eight events, expectations are growing that it will be a leading medal collector like judo.