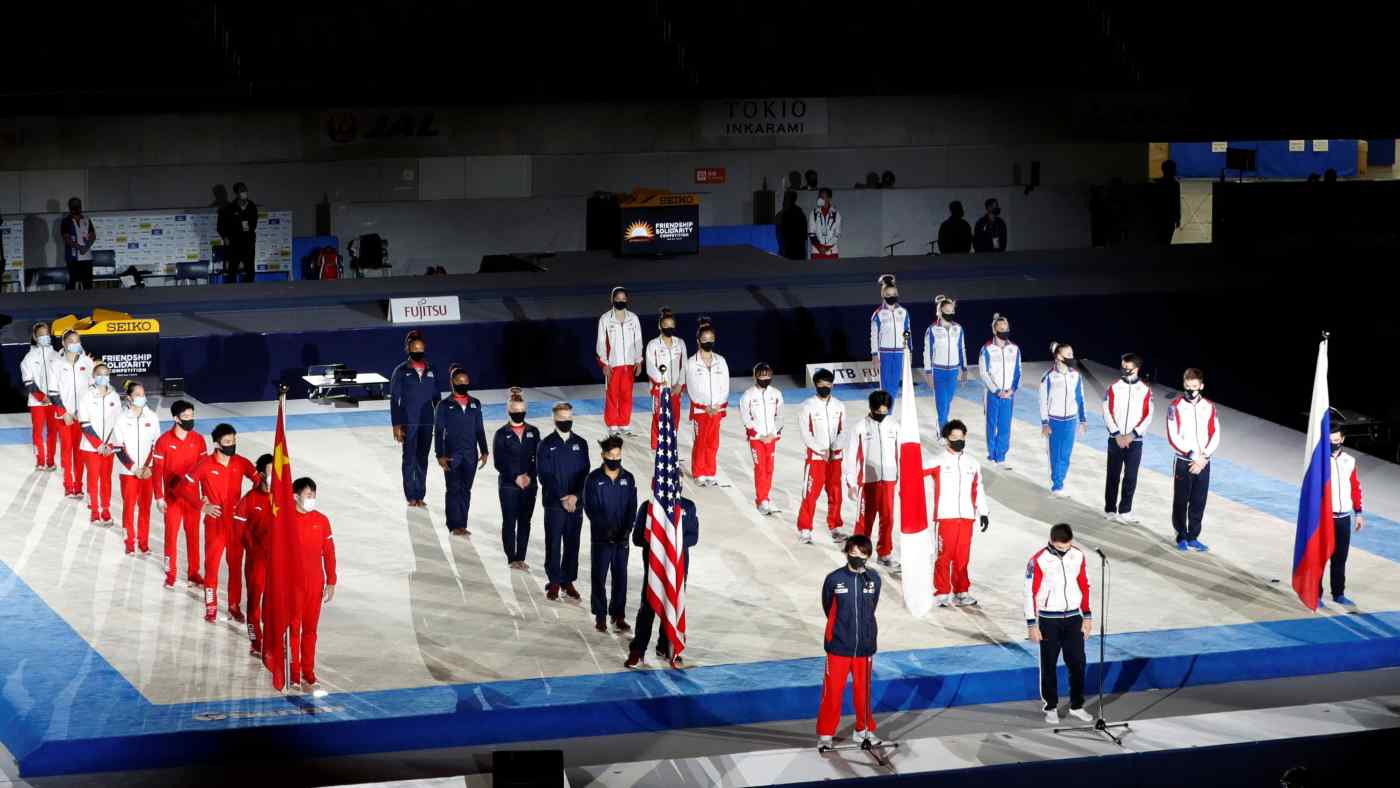 TOKYO -- For a few tense hours, it looked like Tokyo 2020's first trial event that included foreign athletes would be crippled by a homegrown COVID case: Olympic champion Kohei Uchimura had tested positive for the coronavirus on Oct. 28, a week into his quarantine with seven other Japanese gymnasts.

Competitors had been similarly isolated in the U.S., Russia and China, taking PCR tests two weeks, one week, then 72 hours before flying to Japan. When they landed, all 22 were tested a fourth time. The 30 athletes, including the Japanese, began each day with breakfast and a PCR test.

Organizers were relieved when a hospital contracted to run diagnostics for the entire gymnastics event confirmed that Uchimura's test had returned a false positive.

"We thoroughly formulated countermeasures, because even one infection at the meet could conceivably lead to cancellation of the entire games," said Morinari Watanabe, president of the International Federation of Gymnastics.

There was a lot of pressure on Watanabe, a close confidant of International Olympic Committee President Thomas Bach. The Japanese businessman not only oversees world gymnastics but was also tapped to organize Olympic boxing after the sport's federation bordered on insolvency. With the gymnastics event, he had to convince both athletes and the Japanese public that the games could go on without risking health. 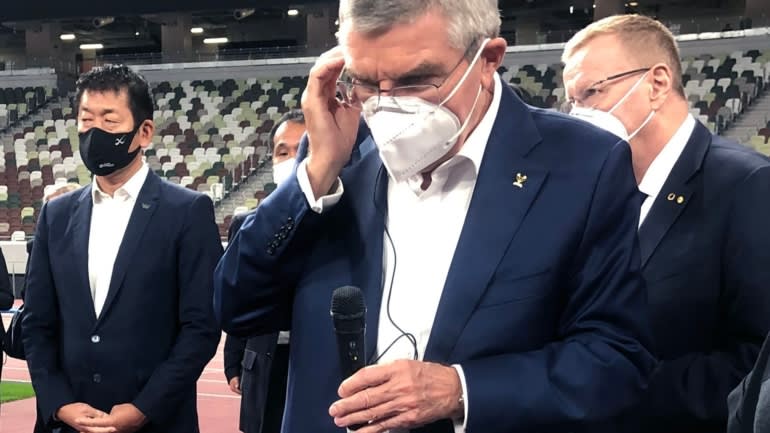 "When the foreign athletes arrived in Japan, I saw fear in their eyes," Watanabe told Nikkei Asia. "They seemed to wonder if it was right to come to Japan. ... Safety and security are two different things. We can ensure safety by taking measures but security is a state of mind."

Tokyo 2020 organizers hope the gymnastics trial will persuade athletes in all sports to attend the games despite the pandemic. But isolating 22 foreign gymnasts over one weekend is a far cry from the logistics nightmare of keeping 11,000 athletes and support staff inside a bubble for two weeks next year.

On Wednesday, the organizing committee was able to map out coronavirus protocols for athletes, support staff and games officials, though many details remain. As per guidelines followed during the gymnastics event, Olympians must test negative for COVID within 72 hours of departure for Japan, then quarantine for 14 days upon arrival. They will be isolated in the Olympic Village and discouraged from sightseeing and using public transportation -- undoubtedly safe, but a massive blow to Japan's hopes for a tourism boom. 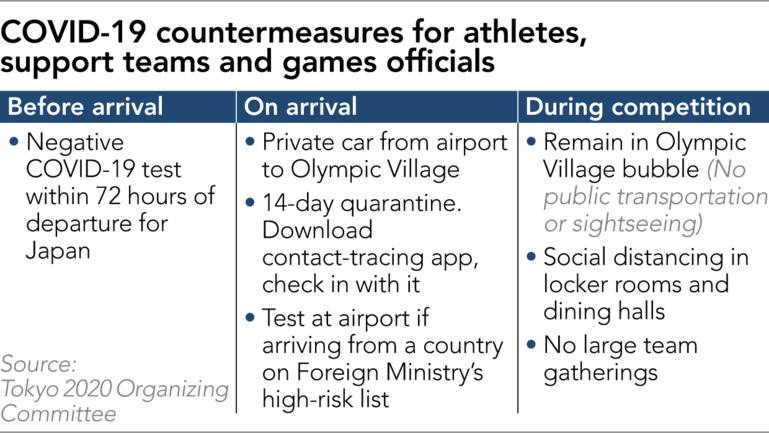 Crowd flow will be strictly managed at each venue while athletes' dining areas and locker rooms will have plastic partitions. Organizers hope the stringent testing and social distancing regime, which all athletes must undergo, will create a sense of security. The measures are hoped to allay the fears of Olympians that in March caused Canada and Australia to pull their sizable teams out of the 2020 games, ultimately leading to a yearlong postponement.

"You [now] know the fellow athlete eating dinner across from you has the same regular testing regime that you have," said Bach, who visited Tokyo for three days this week to inspect Olympic sites. "This creates confidence."

Bach's confidence tour, his first to Japan since the onset of the coronavirus, coincided with a third wave of infections. On Wednesday, the country saw a record high of 2,201 cases.

IOC coordination commission chair John Coates sought to assuage concerns about the readiness of the Japanese and Tokyo governments to deal with the influx of foreign arrivals. "They've looked at all the worst case scenarios and created a playbook," he said to reporters on Wednesday at the end of a three-day project review with Tokyo organizers. 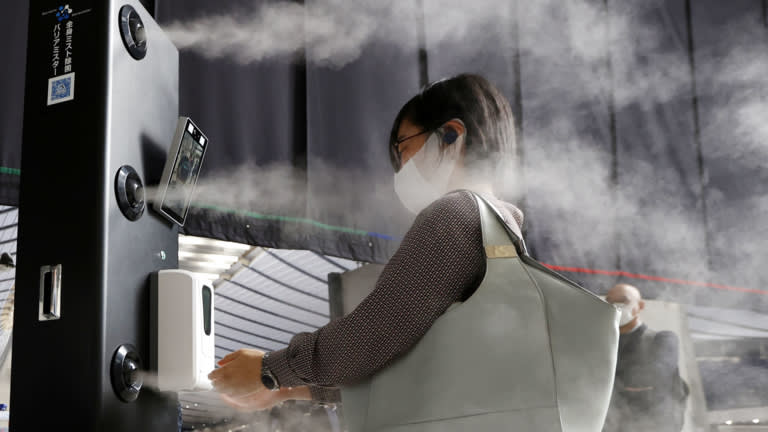 Devices to measure body temperature and disinfect have been installed at Yoyogi National Gymnasium in Tokyo.   © Kyodo

The review, however, did not address the question of foreign spectators. Materials provided to reporters by the organizing committee acknowledged the infeasibility of prohibiting spectators from sightseeing or using public transportation.

"Many fans are taking a 'wait and see' approach to Tokyo 2020," said Ken Hanscom, chief operating officer of TicketManager. "If they have their tickets, they are only booking refundable accommodations and holding off on flights until the situation with international attendance becomes more clear." 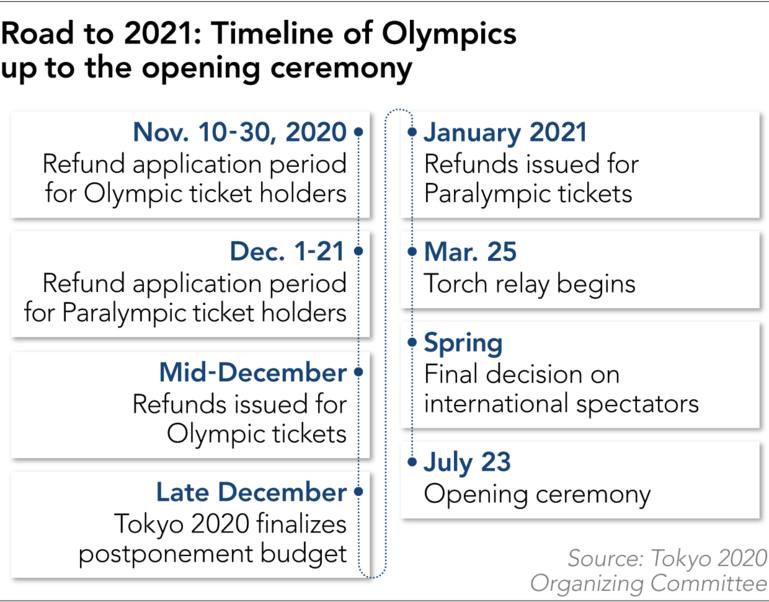 Organizers are banking on developments in rapid testing, which can now handle 4,000 to 5,000 athletes per day, they estimate. News of two potential vaccines from Pfizer and Moderna coincided with IOC President Bach's inspection of Olympic facilities this week. Athletes and spectators will be "encouraged" but not obliged to be vaccinated, Bach insisted, at one point suggesting the IOC would cover the cost of inoculating athletes.

"We have to ensure the athletes' experience can be made as good as possible," Bach said, as he toured the new National Stadium in Yoyogi, where the opening ceremony will take place.

Bach, a former fencing champion, said the empty stadium reminded him of his days as an athlete representing West Germany in the 1976 Olympics. As he walked around the grounds, he asked reporters to imagine the stadium in nine months, filled with tens of thousands of athletes and spectators. But in the middle of a pandemic, this might take quite an imagination.

While organizers are taking pains to allow every country's flag to be carried into the stadium, teams will not be allowed to pad their parade contingents with non-athletes. Coates said the IOC would also encourage national Olympic committees to send their athletes home as soon as their competitions are over. "Staying longer in the village increases the potential for problems," he said.

Concerns about importing more COVID cases on top of domestic infections were reflected in a recent survey by Central Research Services, in which 58.5% of Japanese respondents said the number of Olympic spectators should be limited.

"If COVID is spread through airborne transmission, it is ultimately better to host the games behind closed doors," said Kazunari Onishi, professor of public health at St. Luke's International University in Tokyo.

A baseball game at Yokohama Stadium on Nov. 1 with 27,850 attendees, or 86% capacity, served as a test event for Olympic spectator control. High-definition cameras detected people without masks, and a smartphone app informed users of restroom and shop usage. But in the stadium, spectators were seated shoulder to shoulder with no plastic dividers. 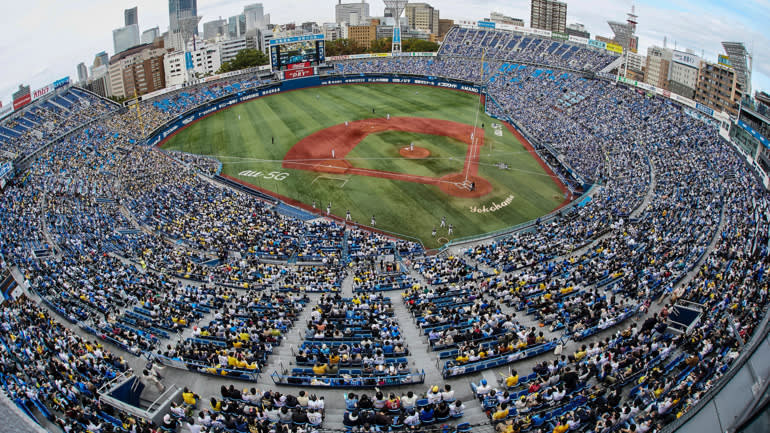 "It seems like they think having spectators wear masks is enough," said Onishi. "It seems insufficient to me."

The potential for a public health crisis has given anti-Olympic protesters further ammunition on top of the ballooning cost of the games. Organizers revealed last month that they trimmed 30 billion yen ($283 million) of costs, 2% of the original $12.6 billion budget, but it remains unclear how much the postponement will cost.

A group of 10 very vocal protesters followed Bach to each of his stops in Tokyo. "Abolish the Olympics! Thomas Bach, get out!" they chanted on Tuesday as Bach's car left the National Stadium.

Top officials this week acknowledged the challenge of winning back public favor, with Bach and Coates repeatedly saying that athletes would be encouraged to get vaccinated and stay in the Olympic Village bubble "out of respect for the Japanese people."

Bach's first stop in Tokyo was an award ceremony, where he presented the Olympic Order -- the movement's highest honor -- to former Prime Minister Shinzo Abe. The long-serving leader, who was instrumental in bringing the 2020 games to Japan, said his award should serve as an encouragement to the Japanese people "not to give up on insisting that we make the games a success."