TOKYO -- Tokyo Olympic organizers this week denied an International Olympic Committee assertion that Japanese Prime Minister Shinzo Abe committed to shouldering the additional costs of postponing the games until 2021, laying bare differences over how the funding strain will be addressed.

Cost-sharing has been a sensitive topic for the Olympics' cash-strapped stakeholders, who have so far acted in concert and issued uniform statements on the unprecedented postponement due to the coronavirus. While organizers have not reached an official estimate of the additional burden, analysts expect it to reach $2.7 billion.

Given the pains taken so far by the Tokyo Olympic Organizing Committee and the IOC to present a united front on moving forward, the former's response to what it saw as a misrepresentation came as a jolt.

"In the meeting on March 24 between Prime Minister Abe and IOC President [Thomas] Bach, the issue of who will bear the cost was not discussed. Therefore, it is not appropriate for Prime Minister Abe's name to be quoted in this manner," a Tokyo 2020 spokesperson told reporters on Tuesday.

The comment came in response to a list of answers to frequently asked questions published on the IOC's website on Monday. The spokesperson said Tokyo 2020 had asked the IOC to amend its explanation regarding the financial impact of postponing the games due to the pandemic.

This week's unusually public disagreement may have been a signal of negotiating stances. On one side is the host city that has spent over $12 billion on the games. On the other is the IOC, with its broadcasting and sponsorship revenues, and a $2 billion reserve fund.

Based on the host city's obligation to cover all operating costs, "the IOC seems to be taking the position that all of these costs are part and parcel of the operation of the games, and so Tokyo should cover it," said Andrew Zimbalist, professor of economics at Smith College in the U.S. "Tokyo is thinking the IOC should use their reserve fund to cover the cost." Gymnastics at the Rio Olympics in 2016: The sport's federation is one of many under financial constraints.   © Reuters

The additional financial commitment will be difficult for the Japanese government: Its coronavirus stimulus package has ballooned to $1.09 trillion, including a universal cash handout.

"The possibility of the Olympics happening next year is still not certain at the moment, so the extra cost may turn out to be a sunk cost," said Masamichi Adachi, chief economist for Japan at UBS Securities.

The Tokyo organizing committee has already spent $5.6 billion of its $5.9 billion budget. The IOC, meanwhile, has its own costs to worry about.

"The IOC is certainly facing some very significant costs which are related to the Olympic movement," said the IOC's John Coates in a joint press conference with the Tokyo organizers last week. "We will not stand by and watch any of our international federations collapse."

Several of the federations are in a financial bind, based on recent annual reports analyzed by Nikkei. Revenues from broadcasting rights and ticketing will fall short of expectations this year, due to competitions suspended by the coronavirus.

Even before the pandemic, some federations were either already in the red or predicting losses. The International Gymnastics Federation, which tends to suffer in Summer Olympics years because it cannot hold its own events, projected a roughly $5 million operating loss for 2020. Governing bodies for cycling, wrestling and sailing all recorded losses for 2018, despite shared revenue generated by the Winter Olympics that year in Pyeongchang, South Korea. 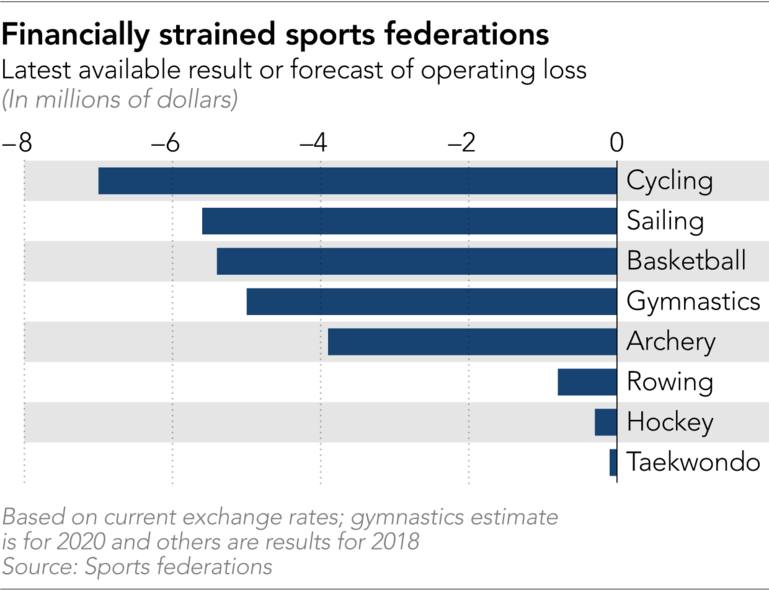 "The vast majority of these sports are non-revenue sports. They really do count on the Olympics to generate funding for them," said Victor Matheson, professor of sports economics at College of the Holy Cross in the U.S.

An IOC source confirmed that the Dominican Republic's Olympic committee, among others, has asked Lausanne for financial aid. Last week, the Australian Olympic Committee announced its executives and senior management would take voluntary pay cuts to keep their organization afloat during the postponement.

And while the International Paralympic Committee operates independently from the IOC, President Andrew Parsons recently said his organization was having "cash flow" problems after broadcasters asked to delay payments until 2021.

"Some of these [federations and committees] are completely dependent on IOC funds. They are going to have a hard time meeting all of their obligations if they don't get money from the IOC," said Smith College's Zimbalist.

Per its annual reports, the IOC aims to distribute 90% of its revenue to the Olympic Movement, which includes contributions to the local organizing committee, national Olympic committees, and international sports federations.

After the Pyeongchang Games, the IOC reaped $2.2 billion and distributed $215 million each to national committees and sports federations. About 40% was allocated to Pyeongchang organizers -- a record amount of $887 million compared to the less than 30% cut received by host cities in the 2009-2012 period. Tokyo organizers will receive a smaller commitment of $800 million.

That Tokyo is the only city in the world ready to host the Olympics in the next year gives it good leverage with the IOC, according to Matheson at College of the Holy Cross.

But there are limits to how much the IOC can afford. "You can't get blood from a stone," he said. "There's only so much that Tokyo can squeeze out of the IOC."