Sunisa Lee's gold medal stirs hopes for Hmong in US

Gymnast's grit in face of hardship resonates with Laotian group's past TOKYO -- Before the Tokyo Olympics began, U.S. women artistic gymnasts were said to have their sights set on a silver medal at best in the individual all-around event. The reason is simple: Superstar Simone Biles' victory was a foregone conclusion.

But when Biles withdrew from the competition over mental health concerns, her teammates sensed the door was open.

Sunisa Lee was one. "I just had to switch gears. I feel like the whole season I was second to [Biles], so when the opportunity was there, I had to do what I normally do," said Lee. The 18-year-old Hmong-American extended the U.S.'s winning streak in the women's gymnastics all-around event that began at the Athens Games in 2004.

The Hmong were originally a mountain people engaged in slash-and-burn farming in Laos. During the Vietnam War, the U.S. military recruited them and organized special forces consisting of Hmong troops, taking advantage of their familiarity with mountainous areas. They took part in the CIA's secret war in Laos, battling communist forces and conducting operations to cut the Ho Chi Minh Trail that supplied communist guerrillas in southern Vietnam.

After the war, many Hmong left their home villages once Laos turned communist. A large number fled to the U.S. by the 1990s, while some were held at refugee camps in Thailand before migrating to the U.S. in 2004 and 2005, and settling in and around Minneapolis, Minnesota. 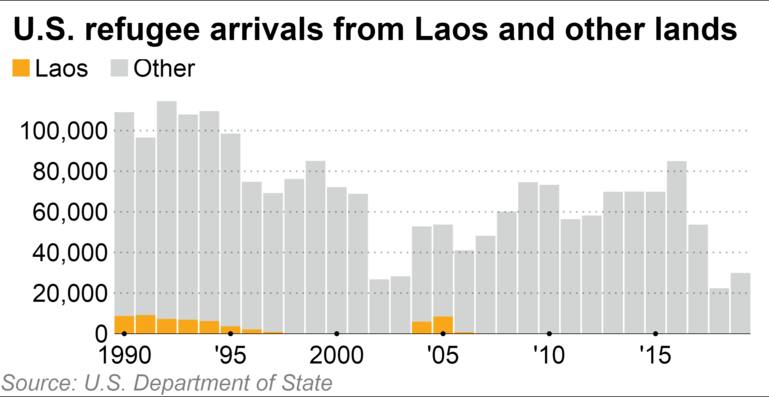 Lee's parents were among the Hmong refugees accepted by the U.S. According to media reports, her father arrived in St. Paul, Minnesota, in the late 1970s at age 7, while her mother did so in late 1980s at age 12. Lee was born in St. Paul in 2003.

The moment Lee won the gymnastics all-around was one of jubilation for the Hmong community in the U.S., which has had a history of hardship.

"This medal definitely means a lot to me," said Lee, who is the first Hmong American to make the U.S. Olympic team. "The past two years have been absolutely crazy. ... There were a lot of times I wanted to quit." Without the support of her coaches, medical staff and her parents, she would not have captured the gold medal, Lee said. 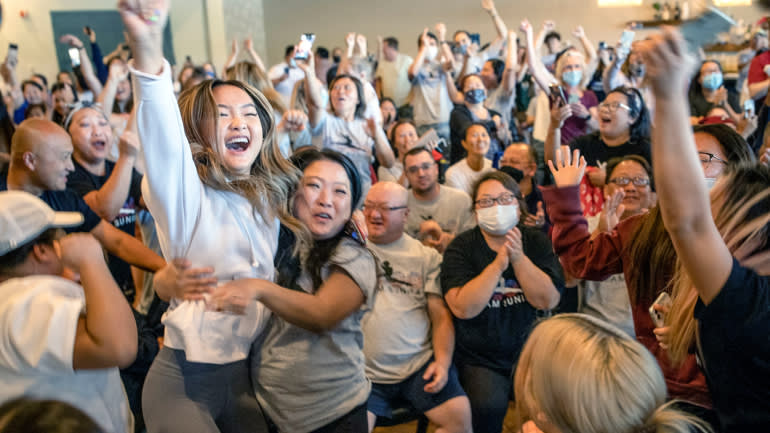 Sunisa Lee's family and friends react as they watch her clinch the gold medal in the women's gymnastics all-around event at the Tokyo Olympics on July 29  in Oakdale, Minnesota.    © AP

Lee had a hard road to Tokyo. Just before the U.S. championships in 2019, her father fell off a ladder as he was pruning a tree, becoming partially paralyzed. Since Lee began gymnastics at age 6, her father has always supported her. Overcoming the personal setback, Lee finished second behind Biles in the championships.

At the world championships the same year, she contributed to the U.S. victory in the team competition, winning medals on some apparatuses. Then, just as her dream of making the Olympic squad came into view, the 2020 Games were postponed for a year due to the coronavirus pandemic.

Lee became extremely depressed and had trouble sleeping. Her gym was closed for three months. And just after it reopened, she broke her leg. Adding to her grief, she lost an uncle and an aunt to COVID-19.

It was Biles who supported Lee amid her misfortune, staying in touch with her constantly and standing by her, Lee said. At the Tokyo Games, Biles cheered Lee on from the stands. 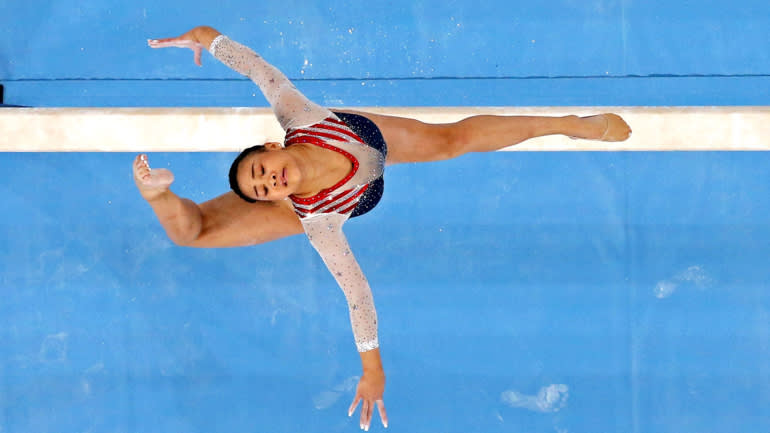 On the day of the final, her father told Lee "to do what I normally do, just do my best," and "not to focus on the scores or anything like that," Lee said.

Minneapolis is where George Floyd was killed by a police officer, touching off weeks of protests and giving rise to the Black Lives Matter movement. One of the police officers charged in Floyd's death was Hmong, thrusting them into the center of the debate over racial discrimination, including discrimination against Asian Americans.

Before the Tokyo Olympics, Lee told Elle magazine that she wants people to know more about the Hmong. That wish will surely come true now, with her gold medal giving Americans a chance to think more deeply about the minorities, including the Hmong, living in their own neighborhoods.