Newlyweds to spend much of their time apart preparing for matches TOKYO -- Swiss tennis stars Roger and Mirka Federer gained fame for marrying after first meeting at the 2000 Sydney Olympics. Now the tennis power couple Gael Monfils and Elina Svitolina have raised the bar by making the Tokyo Olympics their honeymoon getaway of sorts.

Svitolina and Monfils tied the knot in Geneva last Friday, and arrived in Japan for the Games three days later. The two were seen practicing together Tuesday at Tokyo's Ariake Tennis Park, which serves as an Olympic venue.

"We are used to having so many competitions in a year, so there is no time for resting," Svitolina told the International Tennis Federation. "Now it's time to focus on tennis and the Olympics of course."

A native of the Ukraine and the world's sixth-ranked player on the women's side, Svitolina raised her profile when she defeated U.S. star Serena Williams in their third-round match at the 2016 Rio Olympics. Svitolina was eventually eliminated in the quarterfinals. Gael Monfils of France practices at Tokyo's Ariake Tennis Center ahead of the 2020 Summer Olympics on July 22.   © AP

For Monfils, a Frenchman ranked 18th in the world, Tokyo marks his third Olympic appearance. He reached the quarterfinals at both the 2008 Beijing Games and Rio. In the latter, he lost a hard-fought match to Japan's Kei Nishikori.

Monfils is known for his unpredictable acrobatics on court and approachable personality. He has built up a large social media following, and the couple have been busy posting about their relationship on their respective accounts.

Svitolina uploaded her wedding photo on Instagram, along with the caption, "Best day of my life." Now that she is in Tokyo, she says she has been struck by Japan's infamously torrid summer weather.

"It is extremely hot," she noted. "I didn't expect it to be this humid and hot here."

With an official honeymoon scheduled for November, according to Svitolina, the newlywed remains in a celebratory mood.

"So many exciting events in my life," she said. "Now it's so nice to be at the Olympics." 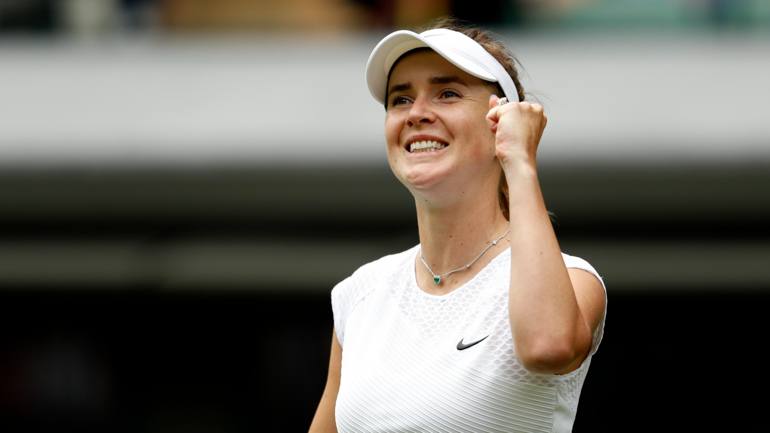 Ukraine's Elina Svitolina celebrates winning her first round match at Wimbledon on June 30. She said it was "unbelievable" to be able to celebrate her wedding and compete in the Olympics despite COVID-19.   © Reuters

During the Games the two will stay with their respective national teams in the Olympic Village, meaning they will spend considerable time apart. But both say they feel lucky that their families attended their wedding and that they are competing in the Olympics in spite of the pandemic.

Svitolina described the Olympic Village as "very special," citing the opportunity to see athletes from other sports prepare for their own events.

"I'm really happy to be a member of the Ukrainian team," Svitolina added. "It's definitely exciting, and hopefully I can help Ukraine get another medal."