The turbulent journey to the opening of Tokyo 2020

Japan's pandemic Games have faced myriad problems over the past decade 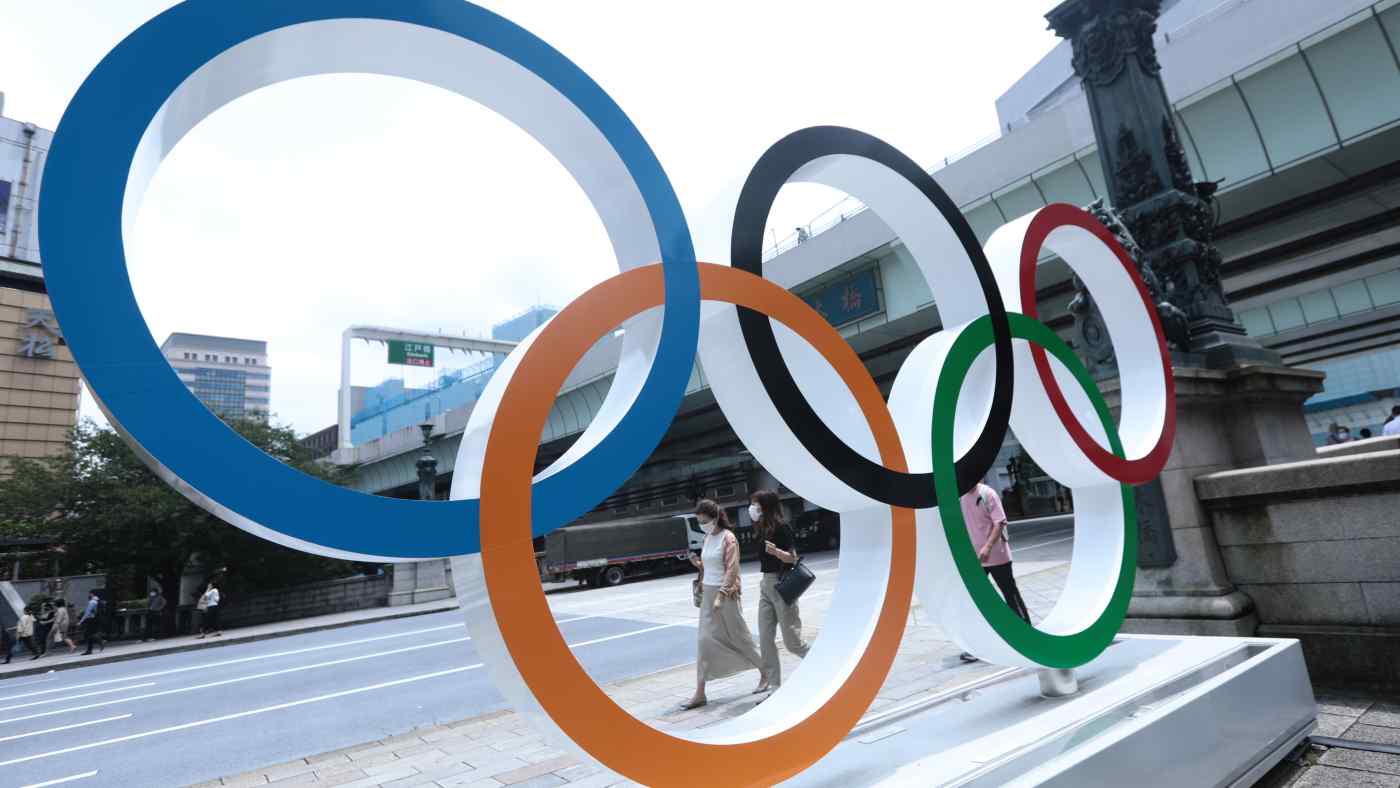 TOKYO -- Ever since the first modern Olympics in Athens in 1896, the quadrennial sporting extravaganza has had to overcome myriad woes -- from natural disasters and medical crises to wars and terrorist attacks.

For Tokyo 2020, the COVID-19 pandemic has obviously been the biggest headache by far, but it's not been the only one. Getting from the launch of Tokyo's bid a decade ago to this week's opening ceremony has involved traveling a long and winding road, filled with potholes and contention.

"The challenges facing Tokyo organizers rank high in the political history of the Olympics," Jules Boykoff, a political scientist at Pacific University in Oregon and author of four books on the Olympics, told Nikkei Asia.

"Never before have the Games been postponed and then eventually staged. Because the Tokyo Games have been a cascade of calamities bookended by natural disasters of sorts -- Fukushima and COVID-19 -- it stands out as an Olympics with an enormous number of complicating factors."

Japan long struggled to be picked to host its second Summer Olympics after the 1964 Tokyo Games. Nagoya lost to Seoul for the 1988 Games, Osaka was knocked out in the first round after bidding for 2008, and then Tokyo trailed Madrid and winner Rio for 2016. Undeterred, Tokyo tried again after being chosen by the Japanese Olympic Committee (JOC) in July 2011 to be the country's candidate for 2020.

Tokyo submitted its bid to the International Olympic Committee on Jan. 7, 2013. Under a slogan of "Discover Tomorrow," the city promised a "highly compact and central plan" using technological and operational excellence to deliver a "very low-risk" Games.

A poll by the Tokyo 2020 bid committee in October 2012 showed 64% of Japanese and 65% of Tokyo citizens supported hosting the 2020 Olympics, while 78% and 81%, respectively, said the Olympics would leave positive legacies in Japan.

The Tokyo Metropolitan government put the price tag of hosting at 734 billion yen ($6.67 billion at the current exchange rate), while the bid committee estimated the world's third-biggest economy would get a boost of more than 3 trillion yen ($27.2 billion) and 150,000 jobs would be created.

The government billed the Games as the "Recovery Olympics" that would showcase how Japan had reconstructed after the massive March 11, 2011, earthquake and tsunami that killed thousands and triggered a meltdown at the Fukushima nuclear power plant.

But fears over radiation leaks from the plant hurt Tokyo in its battle with Istanbul and Madrid to host in 2020. A day before the IOC vote in Buenos Aires, Tsunekazu Takeda, then president of the JOC and the bid committee, insisted there was no issue.

Prime Minister Shinzo Abe left a G-20 summit in Russia early to fly to Argentina to make a last-minute pitch. Calling Tokyo one of the world's safest cities, he told the IOC, "Some may have concerns about Fukushima. Let me assure you, the situation is under control. It has never done and will never do any damage to Tokyo."

He was supported by TV newscaster Christel Takigawa, who, in French, spoke memorably about the spirit of omotenashi -- the Japanese concept of hospitality.

Abe's effort paid off. Thumping Istanbul on the second ballot, Tokyo was awarded the Olympics on Sept. 7, 2013. In Tokyo, many screamed with joy. "Japan is back," Abe told the New York Stock Exchange later that month, adding that his country felt "great elation" over hosting the 2020 Games. Then Japanese Prime Minister Shinzo Abe celebrates with members of the Tokyo bid committee as Jacques Rogge President of the International Olympic Committee announces Tokyo as the city to host the 2020 Summer Olympic Games during a ceremony in Buenos Aires on September 7, 2013.    © Reuters

For a while, Abe rode high in the polls and the Olympics were widely supported. But a row erupted over the cost of a neo-futuristic, 80,000-seat stadium designed by British-Iraqi architect Zaha Hadid -- mocked for its shape and derided by many for being too big for its surroundings in a historic area of central Tokyo. The price tag had spiraled to about $2 billion.

Then, in mid-2015, Abe faced sliding support and the biggest protests in Tokyo for decades over his push for laws expanding the powers of Japan's military. He scrapped the stadium plan and had a new design competition, won by Kengo Kuma.

Meanwhile, the Games logo was alleged to have plagiarized the emblem of a Belgian playhouse. While the Japanese creator asserted his work was original, the design was scratched -- and after a fresh contest, a new logo was approved in April 2016.

With a stadium getting built and the logo changed, the problems appeared to be over. At the 2016 Rio Games' closing ceremony, Abe pulled a memorable stunt. Dressed as Super Mario, he popped out of a green pipe in the center of Maracana Stadium, shed the costume and held a large red ball while waiving the video-game plumber's hat. Former Japanese Prime Minister Shinzo Abe sheds his Super Mario outfit as he pops up at the closing ceremony for the 2016 Summer Olympics in Rio.   © Kyodo

For a few years, the Tokyo Games appeared back on track. But then fresh issues surfaced. Takeda, JOC president since 2001, stepped down in 2019 after French authorities said they were probing allegations he sanctioned bribes to help Tokyo win the Games. Takeda denied any wrongdoing.

The way athletes would compete in Tokyo's mid-summer heat and intense humidity drew criticism. But the financial sway of U.S. broadcaster NBC made it difficult for Tokyo to move the Games to autumn, as it did in 1964. Concerns over the health of athletes and spectators made organizers move marathon and race-walking events to cooler Sapporo, on the northernmost main island of Hokkaido.

Worries on heat forced organizers to prepare measures such as tents, fans, mist sprays and drink supplies for both athletes and spectators -- even though the original candidature file stated: "With many days of mild and sunny weather, this period provides an ideal climate for athletes to perform at their best."

But no issue compared with COVID-19, which began to cast a shadow on the Olympics in January 2020 when a resident of Kanagawa Prefecture tested positive for the virus after returning from Wuhan, China, where it was discovered.

Dick Pound, a senior IOC official, said that February that if it proved too dangerous to hold the Games in 2020, organizers were more likely to cancel the event than to postpone or move it. The Japanese government quickly rejected cancellation. "We are absolutely not considering a change in plans," Yoshiro Mori, organizing committee head at the time, declared. A rendering model of the originally planned National Stadium, designed by Iraqi-British architect Zaha Hadid, is displayed in Tokyo, in this July 7, 2015 photo.   © Reuters

Yet there had to be a change. With infections spreading rapidly across the globe and vaccines not yet available, Abe on March 24 announced the Games would be pushed back a year.

This forced painful decisions. The IOC had to iron out contractual obligations with broadcasters and sponsors, Tokyo had to delay the handover of condominiums in the Olympic Village that had been sold for occupancy, and ticketing issues had to be resolved.

The rescheduling cost the organizing committee an estimated 300 billion yen ($2.7 billion) in additional fees such as venue rental, labor costs and hotel bookings. The cost of holding the games, even before the postponement, had swelled to $12.6 billion.

Doubts started to grow about whether the Olympics would be held at all.

In April 2020, when the first COVID-19 emergency for Tokyo was declared, Japan Medical Association head Yoshitake Yokokura said it would be difficult to hold the Games the following summer without effective vaccines. Going against Abe's hope for a "full-form" Olympics, Tokyo Gov. Yuriko Koike said in June that a slimmed down event was under consideration. Then Japanese Prime Minister Shinzo Abe announces the postponement of the Games in Tokyo on March 24, 2020. (Photo by Arisa Moriyama)

There was still hope the Games could be held -- and watched -- as normal. In November, baseball games were played in full stadiums to serve as a test for higher capacity limits, and a gymnastics event with athletes from the U.S., China and Russia was held without any infections. In December, Suga said holding Olympics would serve as "proof that humanity has defeated the virus."

Unfortunately, COVID-19 was far from defeated. Multiple vaccines were now in use, but the virus was spreading in many countries including Japan.

In January, during Japan's worst wave of infections to date, IOC President Thomas Bach hinted at the possibility of having no spectators at the Games. Public opinion was turning sharply against the Olympics, with a Kyodo News poll showing that around 80% of respondents wanted the Games canceled or postponed again.

In February, Games preparations were impacted by the resignation of Tokyo 2020 chief Mori, who sparked a storm with comments criticizing women. Seiko Hashimoto, a seven-time Olympian, was appointed to succeed him and be the first woman to lead the organizing committee.

In March, organizers made the "unavoidable decision" to bar overseas fans, which meant reimbursing about 600,000 ticket sales to people outside Japan.

In May, the Asahi Shimbun newspaper, a Tokyo 2020 media partner and one of Japan's biggest dailies, took the extraordinary step of publishing an editorial calling on Suga to cancel the event. The newspaper accused the government and Olympic officials of refusing to address the public's concerns and lambasted a statement by IOC Vice President John Coates that the Games could take place under a state of emergency. A Nikkei poll at the end of May showed 62% of respondents wanting the Olympics postponed or canceled. SoftBank Group CEO Masayoshi Son used a series of tweets to express his bewilderment at the Games going ahead. Kaori Yamaguchi, a JOC executive board member, wrote that the Olympics "have already lost meaning and are being held just for the sake of them." She told Nikkei Asia in June that one legacy of Tokyo 2020 is that fewer cities are likely to bid to host the Games in future.

Even Emperor Naruhito, via the head of the Imperial Household Agency, signaled his concern that the event could cause an expansion of infections.

As polls began to show more support for the Olympics, the debate turned to whether domestic fans would be allowed at venues. Shigeru Omi, an infectious disease expert and the Japanese government's top COVID-19 medical adviser, said holding the Games behind closed doors would be "desirable" to contain infection risks.

Organizers initially decided on a spectator cap of 10,000, or up to 50% of capacity, per venue. But as infections started to surge once more in the Japanese capital, the government on July 8 placed the city under its fourth state of emergency -- which will last throughout the Games. The next day, organizers decided there would be no spectators for competitions in Tokyo.

Tokyo 2020 will be one of the strangest events in the modern Olympic movement's more than 120-year history. Athletes will be in a bubble and unable to enjoy the culture of the city and meet people, and cases have started to emerge at the athletes' village. There will be no foreign visitors bringing color to the event, and the stadiums -- with only officials and guests present -- will be quiet.

"Choosing to press ahead with an optional sporting event during a global health pandemic is a gamble that could well turn macabre," said Boykoff of Pacific University. "Managing positive cases when they arise will be job one for organizers. Trying to manage public opinion alongside all this may be an even more unwieldy endeavor."