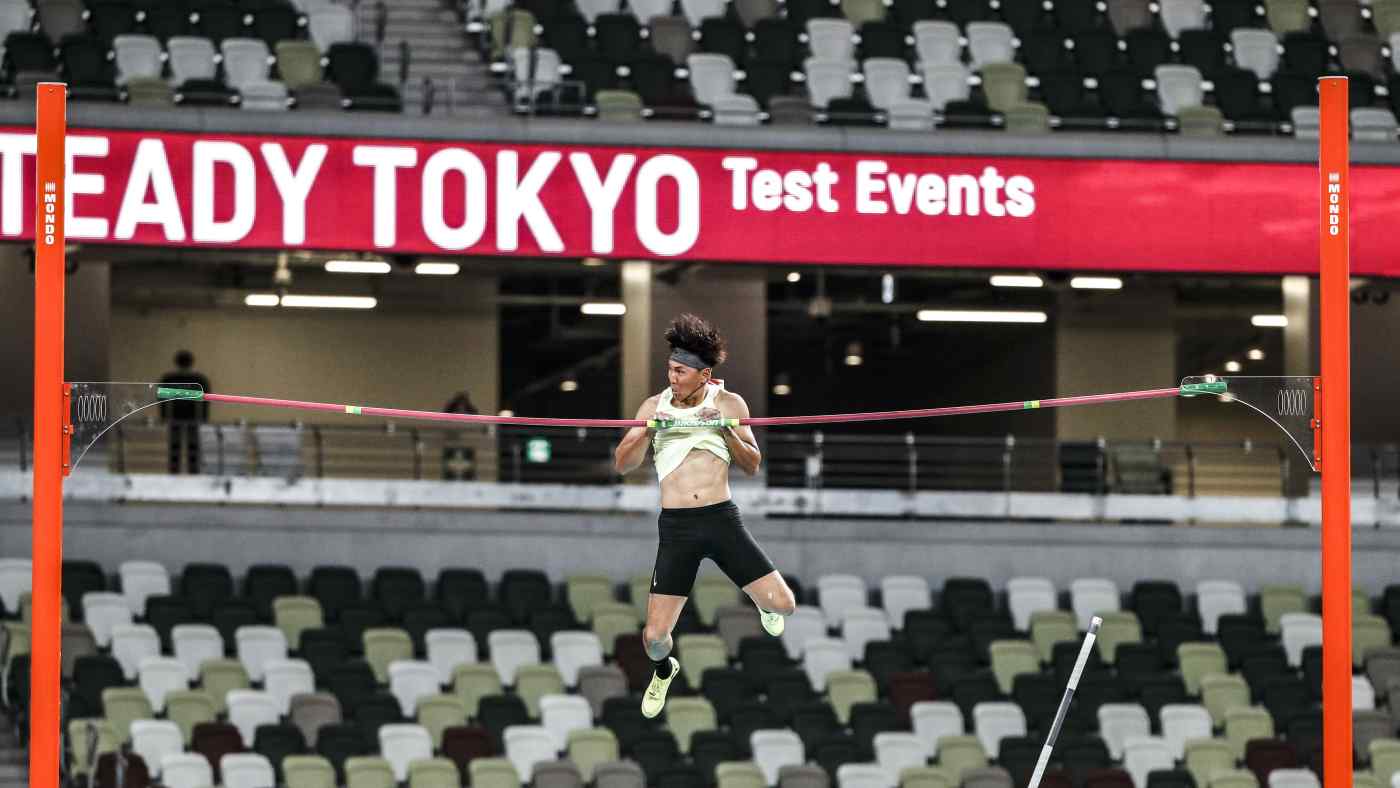 A test event for the 2020 Olympics at the National Stadium in Tokyo's Shinjuku Ward in May. The postponed games will be held without fans in the stands.    © Reuters
FRANCESCA REGALADO and RURIKA IMAHASHI, Nikkei staff writersJuly 9, 2021 12:58 JST | Japan
CopyCopied

TOKYO -- Tokyo 2020's sponsors are running out of opportunities to recoup their Olympic investments, after organizers decided that the postponed games will be held without fans in almost all venues.

The decision deprives the event's corporate backers of what were expected to be important platforms to pitch to the public.

For example, sportswear brand Asics expected that 70% of an Olympic-led boost to sales would occur in the two months before and during the games. As part of its marketing push, today the company is opening a 275-sq.-meter exhibition of sporting technology in Tokyo's Harajuku shopping district, down the road from its flagship store.

Asics hoped to woo spectators filing out of the Yoyogi National Stadium and looking for souvenirs and replica kit. "In the past, during the Olympics, sales tended to significantly jump when Japanese athletes stood on a podium or the national flag was hoisted," Naoki Matsushita, managing executive officer at Asics, told Nikkei Asia.

Now, with the spectator ban and a fourth COVID state of emergency in the capital, Asics and the other 67 corporate backers that raised over $3 billion for Tokyo 2020 are scrambling to adjust their plans. Expectations of Olympic revenues have been downgraded since organizers decided in March to exclude spectators from overseas.

Organizers decided late on Thursday night to ban spectators from all Olympic venues in Tokyo and neighboring Kanagawa, Saitama and Chiba prefectures. Soccer and baseball stadiums in Fukushima, Miyagi and Shizuoka prefectures will be allowed to have spectators up to 50% of capacity or up to 10,000 people.

Even with spectators, beer-maker Asahi anticipates reduced sales from organizers' decision last month to ban alcohol at Olympic venues. The company is forecasting 2.3 trillion yen ($20.9 billion) in sales this year, a 13.2% annual increase, as consumers rush to buy beverages emblazoned with the Olympic rings before Asahi's marketing rights expire in December.

"Over time it has been proven that people will choose an Olympic product over a non-Olympic product," said Rob Prazmark, CEO of 21 Marketing, who helped create the Olympic partner program, known as TOP.

The International Olympic Committee derives 18% of its budget from TOP, which grants international marketing rights to companies such as Toyota Motor, Visa and Alibaba Group Holding. The 68 domestic sponsors, which have their contracts with Tokyo 2020, are limited to airing Olympic ads and marketing branded merchandise only in Japan.

As the Olympics grew unpopular with the Japanese public, sponsors became concerned about the negative impact of association with the games. A spokesperson for Asahi told Nikkei Asia that the company itself proposed the alcohol ban to Tokyo 2020 organizers, in order to deflect criticism from a public that has put up with dry restaurants and closed bars since the end of April.

"The real reason a beverage company will get involved isn't so much for the sale of revenue or product at the games, but how they sell product in the host country," said Prazmark.

Sponsors providing technical support to the games, such as NEC and NTT, are still looking to use the event as a showcase for their products and services. NEC had planned to use its facial recognition technology for COVID contact tracing and spectator temperature checks.

Already ahead of its three competitors in 5G subscribers, telecommunications provider NTT expects to see a further edge from the spectatorless games. NTT's 5G network will be used for high-resolution broadcasts of sailing and golf events and for augmented reality goggles for swimming competitions.

"Unfortunately, the Olympics were postponed for a year, but we would like to still demonstrate the appeal of what we can do," Noriyaki Furuno, NTT Docomo's business development manager, said at a rollout event.

Prazmark said tech sponsors will find other ways to relay their Olympic experience to top corporate clients. "They usually bring their best customers to the games and say if we can do this for the Olympics, which is the most complex event on the planet, we can do this for your company," he said.

Travel sponsors, hurt most by the pandemic, can only hope that the Olympic spotlight will draw international audiences to Japan once borders reopen.

Japan Airlines and All Nippon Airways had signed on as sponsors with an eye on the rewards reaped by their counterparts at the London and Pyeongchang games, in 2012 and 2018 respectively. Korean Air saw annual revenue rise 7.2% during the 2018 Winter Olympics due to more passengers. Brand awareness of British Airways rose from 38% to 54% in 2012 owing to Olympics ads and hospitality events for spectators, according to ad agency Millward Brown.

When it became apparent that the Olympics could be held behind closed doors, Asics issued guidance that its earnings forecast would remain unchanged, since a spectator ban was factored into earlier estimates. The company, which will outfit Japanese and Australian athletes and Tokyo 2020 volunteers, still expects a 20.1% increase in sales this year.

"Viewership is going to be beyond anything we've seen in the past because the world is looking forward to something good happening for the first time in a year and a half," he said.

"There are still plenty of branding opportunities. The glass is half full, not half empty."